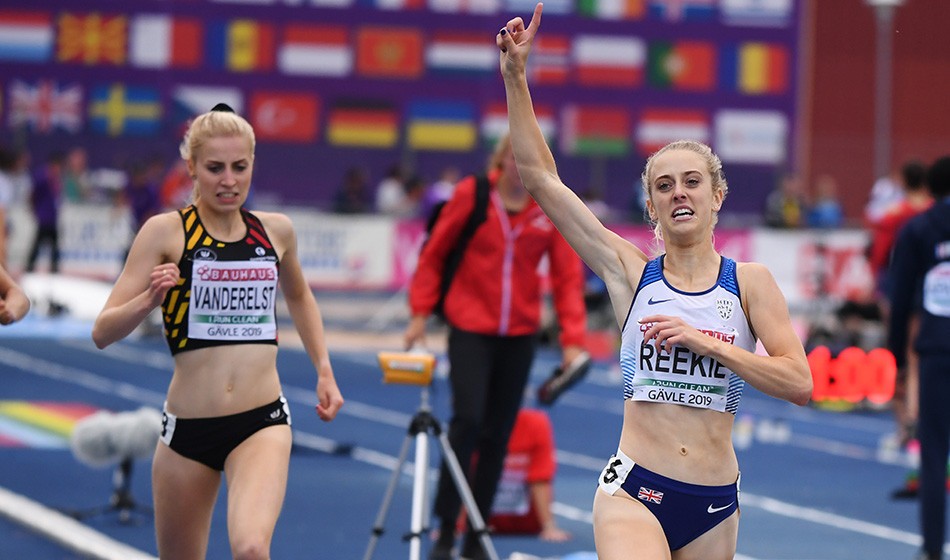 Britain’s Jemma Reekie completed an historic middle-distance double at the European Under-23 Championships in Gävle, Sweden, adding the 1500m title to her 800m gold claimed the day before.

After four races in four days, the 21-year-old clocked 4:22.81 to become the first British athlete to ever win two individual gold medals at the European under-23 event.

It was another fine performance by the Andy Young-coached runner, who is a training partner of British 1500m record-holder Laura Muir. With her latest win, it means that all the female European 1500m titles are currently held by either Reekie or Muir, with Reekie also the reigning European under-20 champion and Muir having both the senior indoor and outdoor titles to her name.

“I don’t think it has hit me yet,” said Reekie. “I am really tired, my legs are sore and the girls did not make that easy for me, both days, but I am really pleased.

“I know I said coming here that I would be happy with two medals but there was only one colour I wanted in both and I am really pleased I got it right.”

As the championships came to a close, the British team finished fourth on the medals table and third on the placing table as Germany ended up on top after a strong last session featuring six gold medals.

Among the nation’s winners was Niklas Kaul as he achieved an impressive 8572 points to take the decathlon title, breaking the championship record with his European-leading PB.

Estonia’s 2017 European under-20 silver medallist Johannes Erm had led the decathlon at the end of the first day and went on to secure silver with a national under-23 record of 8445 points, while Kaul’s team-mate Manuel Eitel took bronze with 8067.

GB teams secured silver in both 4x400m relays as individual 400m medallist Cameron Chalmers anchored the men’s team to a time of 3:04.59 before Hannah Williams crossed the line with 3:32.91 on the clock to finish behind individual 400m champion Natalia Kaczmarek as she powered past on the final leg to get gold for Poland in 3:32.56 after running a 51.84 split.

Silver medals were also claimed by Britain’s Spencer Thomas, as he came through to clock 1:49.06 behind Poland’s Mateusz Borkowski (1:48.75) in the 800m, plus Tom Gale, as he cleared a season’s best of 2.27m in a high jump competition won by European senior silver medallist Maksim Nedasekau of Belarus with a 2.29m clearance.

In the 4x100m relays, GB’s women’s team finished fifth in 44.54, while the men’s team was unable to get the baton around.

Results can be found here, while a report on day one action is here, a day two round-up is here and a day three report is here.