Sam Atkin grows in confidence ahead of Olympic 10,000m test 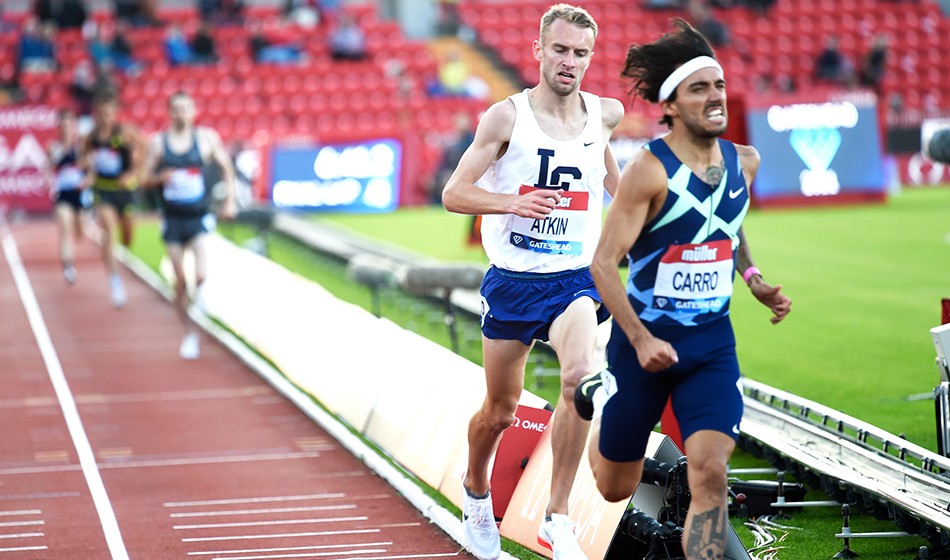 After struggling with an ankle injury during the early part of the year, British distance runner Sam Atkin believes he is rounding into form at exactly the right time ahead of his 10,000m at the Olympic Games.

The US-based Atkin came into 2021 with ambitions of running at the European Indoor Championships and then the Olympic trials for 10,000m in Birmingham, but his plans were scuppered by injury.

“I picked up something which I’d never dealt with before – an Achilles/ankle problem,” he says. “I missed out on a couple of races and definitely lost that little bit of fitness but I came back strong and raced at Gateshead which gave me a lot of encouragement.

“I think there’s a lot left in the tank, especially with such little training behind me.”

He adds: “I’ve done about 11-12 weeks of training. It’s not a lot for a distance runner but to show some good form in Gateshead, I’m excited for the Olympics.”

On missing the trials race where Scott out-kicked Farah to finish first Brit home, Atkin says: “It was a fun race to watch and I didn’t think it would go that way. I think most people thought that Mo would hit the standard but once it happened (and he missed the mark) it kind of cemented the fact that I just had to show some form and that was more than likely that I’d get selected.

“Let’s just say I was pacing around the room a little bit during the (trials) race!”

Atkin is from Grimsby but in 2011 went to the United States to study at Lewis-Clark College in Idaho. He struggled with injury and a self-confessed lack of commitment to the sport. At one point doctors advised him to quit running, too, due to him having Freiburg disease, a condition where one of the metatarsals in his foot protrudes upwards, causing discomfort. But he stayed in Idaho, his commitment to athletics improved and he has thrived under the coaching of Michael Collins.

Speaking to AW via video from Tokyo, he looked in buoyant mood. The 3000m run in Gateshead has given him confidence and he explains: “I was really surprised and pleased for the other British athletes too (Andy Butchart, Patrick Dever and Thomas Mortimer finished just ahead of him with PBs in a race won by Mohamed Katir of Spain).

“Those guys have all had a huge season already with 1500s under their belt and everything whereas I just had a slow 5000m (fifth at the British Championships in Manchester) before the 3000m in Gateshead.  I think there will be one or two of us knocking on the door of that British record in the near future. I feel my 7:39 was definitely unexpected but I definitely feel with more races under my belt then I’d be used to the pace and able to hit a faster time.

“I know I can go with that 60-second lap pace and everyone wants that magic 7:30. Every single runner in that race had raced six or more track events this summer so they’ve all got experience under their belt whereas for me it was just the start of the season.”

When he races in Tokyo his family will be cheering him on from home in Lincolnshire. His father gets particularly tense and will probably watch it alone. “I don’t think my dad will want anyone close to him,” says Atkin. “He gets very nervous even when he’s with my mum and sister. So he’ll be in another room and I guess my mum and sister will be watching it together.”

Atkin’s twin sister Jen is the reigning Miss Great Britain and there is some friendly family rivalry over who can achieve the most in life. “I’m part of the British team and she’s Miss Great Britain,” he explains. “We have a laugh about it. We always try to encourage each other. But we’re also always fighting about who’s going to be on top because neither of us wants to be the black sheep.”

Atkin’s coach Collins will also be watching the race from the US and Atkin says it was a nice moment recently when he was able to call Collins to tell him the news of his Olympic selection. “I remember asking him once what his ambition as a coach was,” Atkin says, “and he said it was to coach an Olympian. So it was definitely special for me to tell him I’d done it.

“We need to make some new and bigger goals now,” Atkin adds. “There are a few things that jump out but I’m not going to give anything away right now. You can probably guess there are a few records due to go down and if I can get a good winter behind me then some special things could happen next year.”

But first the Olympic Games beckons.