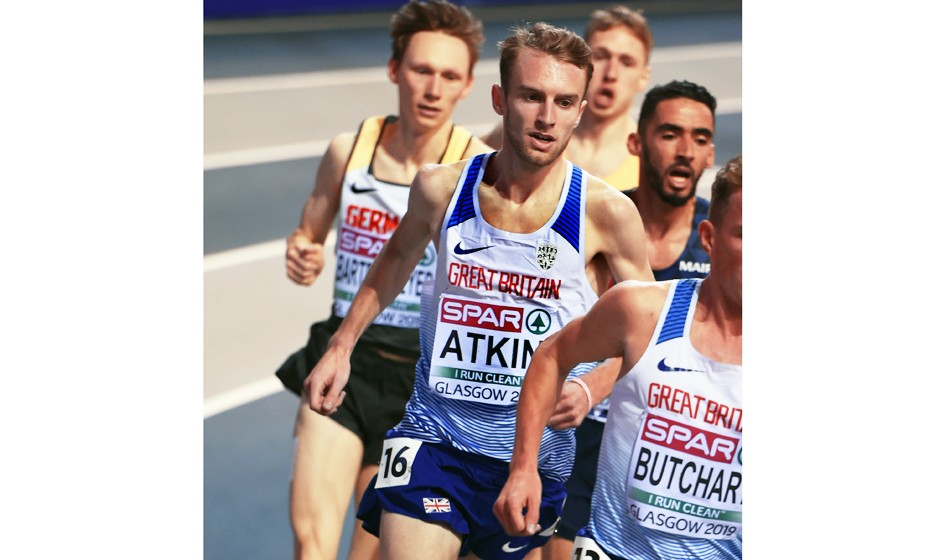 A decade ago doctors told Sam Atkin he was wasting his time trying to run due to a rare foot problem. But he has now gone No.4 on the UK all-time rankings for 10,000m

When Sam Atkin lined up for the 10,000m at the Sound Running Track Meet in California on December 5, his main job was to act as pacemaker. The 27-year-old US-based Brit was also unsure how his legs would feel after running 13:18.57 for 5000m on the same track 24 hours earlier. Yet in the back of his mind he had a nagging desire to finish the entire 25 laps.

Sure enough, when his duties as a pacer were over, he settled into the second half of the race and began to dig deep. His reward? A huge personal best of 27:26.58 that places him No.4 on the UK all-time rankings behind Mo Farah, Jon Brown and Eamonn Martin.

What’s more, the breakthrough performance is an Olympic qualifying mark and he has overtaken former world record-holder at the distance Dave Bedford, plus Brendan Foster, Chris Thompson, Nick Rose, Julian Goater, Steve Jones and Mike McLeod on the national all-time lists. In one race he catapulted himself from semi-obscurity to become one of the most talked about endurance runners in the world.

“It’s hard to put into words,” he told AW this week from Denver, Colorado, where he is staying with a friend and enjoying a few days of easy training. “I wasn’t too happy with the 5000m because I wanted the Olympic standard (13:13.50) and I still feel I’m better shape than the 13:18 I ran.

“People had been telling me to try the 10,000m but I’d always refused to do it. But here I decided to go in and pace the race and do the job that I intended to do, because I’d already committed to that and wanted to help the other guys hit a really good time, but at the same time I felt in really good shape and decided to keep going … and it kind of paid off!”

Was he surprised to run such a fast time for 10,000m after starting as a mere pacemaker who was expected to drop out? “I was very stunned,” he admits. “With about a mile to go I was trying to stay focused but I was thinking ‘I only need a 4:24 last mile and I can do that’. With every lap I was thinking ‘I can do this’ and ‘keep going, keep going’.”

Eric Jenkins, Patrick Tiernan and Edward Cheserek pulled away from Atkin in the closing stages. Jenkins won in 27:22.06, with Tiernan breaking Stewart McSweyn’s Australian record with 27:22.55. “It would have been nice to have had a race with the three guys who gapped me,” Atkin reflects, “but I think by then the 5000m the day before was starting to catch up with me.”

So why the reluctance to race 10,000m in the past? “I’ve always been a low mileage guy,” he says. “I only hit 80 miles a week recently for the first time so I definitely want to keep that consistency of getting into the 80s going. I guess my volume of training doesn’t reflect what I can do in a race.”

Sam Atkin explains how his 10,000m breakthrough run of 27:26.58 unfolded. He began the race as a mere pacemaker but decided to finish the whole 25 laps! pic.twitter.com/JYBOGjtqHl

“I wanted to get the pacing job done and see where I’m at. I’d come here to grab something from this weekend and with Covid you never know when the opportunities are going to come. I thought ‘let’s just do this’ and it paid off, I guess.”

Atkin enjoyed encouragement during the race from fellow US-based Brit Tom Farrell, himself a 13:10 5000m man. Soon afterwards, his phone began buzzing with messages from athletes like Marc Scott. “The first person I called was my dad, who woke my mum up,” Atkin says. “They got up the day before to watch the 5km but I never really told them I was going to be finishing the 10km and they assumed I was just pacing.”

Born in Grimsby in March 1993, Atkin was an excellent teenage runner but certainly not all-conquering. He beat Ben Connor to the North of England cross-country under-17 men’s title in Blackburn – and he’s remained good friends with his old Derby rival ever since – but at various national championships he was close to the front without ever quite battling for gold.

This was partly because he spent a lot of time doing other sports. He was particularly into tennis and football, where he played in goal. “My friends would always say it’s strange that the fittest person on the team was the goalkeeper,” he remembers.

In athletics he started with Grimsby Harriers and moved to Cleethorpes and eventually Lincoln Wellington, where he teamed up with coach Rob Lewis.

In 2011, aged 18, he had the chance to study in the United States and went to Lewis-Clark College in Idaho. But he now admits he probably rushed into the decision at too young an age.

Once there, he struggled initially to commit to his athletics training or education. It is only in the last four years or so, he says, that his he started to take his running seriously.

“I thought it (running) was something I’d just take part in and that it would get me to the US and a degree but I didn’t know where I was going to go from there,” he says.

Atkin’s progress was also affected by a rare problem called Freiburg disease, where one of the metatarsals in his foot protrudes upwards, causing discomfort.

“Two doctors told me to quit running at 17 so that was definitely a pivotal point of my career,” he explains. “Surgery isn’t usually successful so I’ve opted not to have it. I’ve never even met anyone else with it. I still get occasional reoccurrence now and it’s a bit like arthritis as I have good and bad days,” he says, adding that he wears carbon fibre orthotics to manage the issue.

After completing degrees in sports administration and business management, Atkin has stayed in Idaho and works part-time as an assistant coach. Without sponsorship or Lottery funding, he admits it is tough to train and race at a high level with limited resources but he believes he has more chance of improving in the United States than he would if he returned to the UK.

“It’s hard sometimes because I’m not an athlete with lots of resources. I largely train by myself and don’t have a contract. So it’s been hard.”

He adds: “I’m not ashamed but I live with my college coach and his family, too. They are basically like my second family.”

His coach, Michael Collins, coaches at Lewis-Clark College and is also the mayor of the city of Lewiston. Collins played basketball at college and moved into cycling and ironman triathlon, which is where his knowledge of endurance running comes from.

Atkin has not ruled out racing indoors and has an eye on the European Indoor Championships in Poland. He ran in the event last year in Glasgow, incidentally, placing eighth in the 3000m.

Further ahead, he says: “Obviously the big one is the Olympics but I’ve got other things I want to do in terms of times. Definitely in the 5000m I’m in way better shape than 13:18. Although I’m not sure right now when I’ll get chance to race that distance again until something like Payton Jordan. I probably should be doing some 1500s to get some speedwork in, too.

“When it comes to 5000m, there are two good guys – Andrew Butchart and Marc Scott – who have already got the standard so it’d be nice to join the club and have that time with the opportunity to race in the British trials. I’ve not really decided on anything yet, though, especially with everything being up in the air (due to Covid).”

Atkin enjoys the idea of racing the Night of the 10,000m PBs in London in June as well. “I’ve always watched that event and I’ve put it off thinking these guys were crazy doing 25 laps on the track. But now it’s on the table I’d definitely consider it nearer to the time.”

Certainly, he feels he has lots of room for improvement due to his mileage still being relatively low. He feels he will benefit if he can start training with other runners, too, whereas he is also a relative rookie when it comes to altitude training.

He has not been back to England since August 2019, but he remains close to his family. His parents aside, his biggest supporter is probably his twin sister Jen who, remarkably, won the Miss Great Britain title at the start of this year after losing eight stone in weight.

With the 2021 beauty contest unlikely to take place due to the coronavirus, she will probably continue wearing her crown through next year. So there is the strong chance Sam could be racing for Britain with his sister – the reigning Miss Great Britain – cheering from the sidelines.

“I’m not sure I’d want her at a race because she’s the loudest person I know and I’m sure I’d hear her shouting above everyone else,” he jokes, before adding: “My mum and Jen are already asking about going to Tokyo but I’ve told them not to get ahead of themselves just yet. It’s great for my family after all the support they’ve given me.”