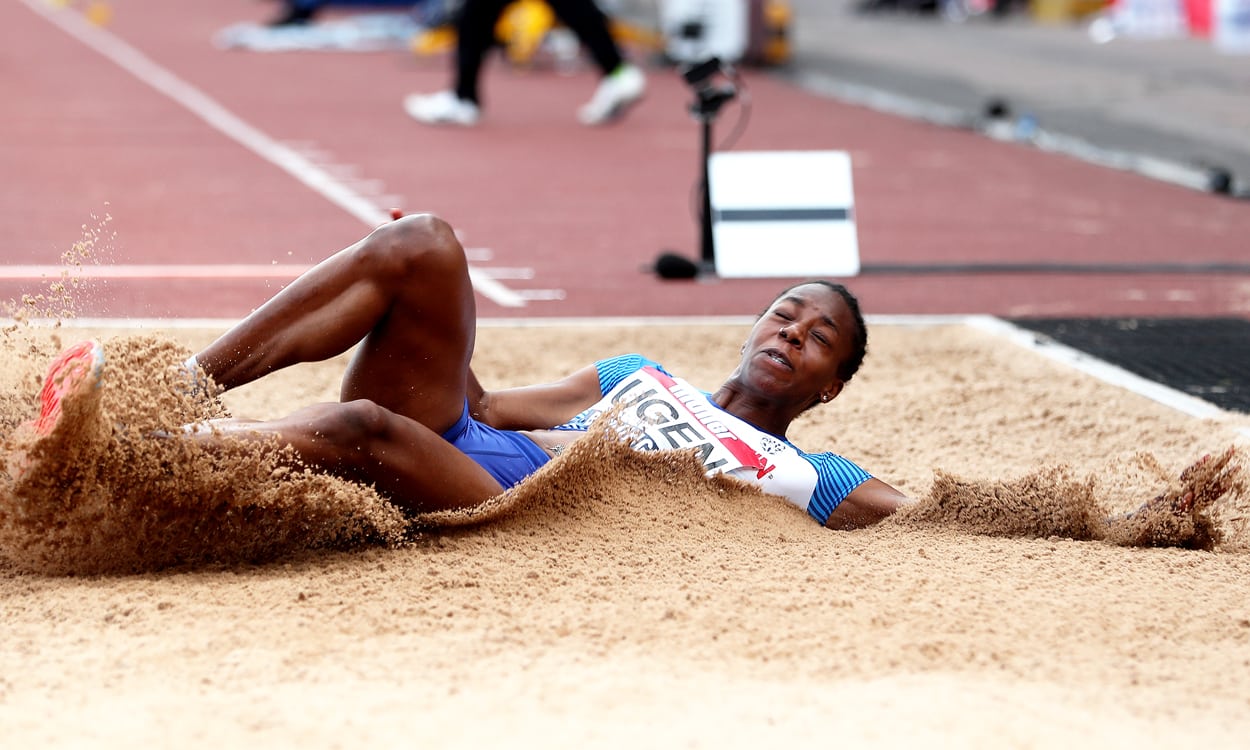 Long jumper soars to 7.05m victory in Birmingham on a day full of brilliant action

At arguably the finest British Championships for years, the women’s long jump was the best of the bunch on day two of the Müller-sponsored event. Lorraine Ugen led the way with a world-leading mark and championship record of 7.05m, while hot on her heels a further four athletes beat the European Championships qualifying mark of 6.60m.

Birmingham was blessed with warm conditions and the athletes responded with results as hot as the weather. Ugen’s mark was just 2cm short of Shara Proctor’s UK record, whereas Proctor herself was also in fine form with a 6.81m jump for bronze as Jazmin Sawyers jumped a 6.86m PB for silver, while Jahisha Thomas leapt a 6.69m PB in fourth, Abigail Irozuru 6.64m in fifth and teenage heptathlete Niamh Emerson 6.41m in sixth.

For Ugen, the mark would have been good enough to win the world title in London last year and she said: “It feels good to be British champion, get a championship record and see so many people competing in the long jump. This is the biggest long jump field I have seen at this event and it was just nice to see everyone jumping well and getting season and personal bests.”

Sawyers added: “You are never supposed to be this happy with silver, but I am so chuffed. It was an amazing competition and I am over the moon with that performance.”

Hammer thrower Sophie Hitchon was also in good form as she took her seventh title with a championships record of 72.02m. The Olympic medallist deconstructed her technique last autumn in search for future improvements and judging by her throwing on Sunday the changes seem to be working as she won by almost 10 metres from Jessica Mayho.

Ever the perfectionist, though, Hitchon said: “I have still got a lot of things to work on. Still some hiccups in there, but we will get there.”

A much-anticipated 200m showdown saw Jodie Williams start favourite with Bianca Williams also looking good after her bronze medal in the previous day’s 100m. But the incredible rise of Beth Dobbin shows no sign of slowing down as she clocked a championships record of 22.59 to pip Bianca by one hundredth of a second with Jodie a close third and 2017 champion Shannon Hylton fourth.

Earlier, Dobbin improved her Scottish record to 22.75 into a slight headwind in the heats and the final produced yet another national record for her.

Dobbin (below) said: “Last year my aim was to make the final and the last few years I have just been happy to make the final. This year I knew if I ran a good race I could come away a British champion. It’s a dream come true. I’ve worked so hard for this. It’s crazy.” 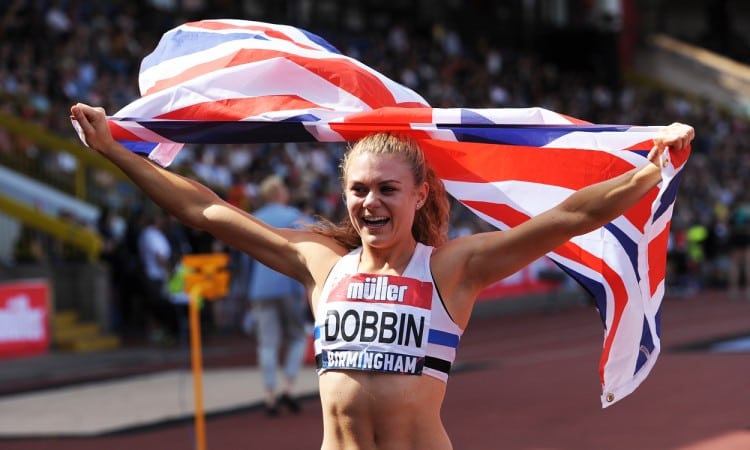 Perhaps the biggest name of the championships, Laura Muir, saw her 800m victory clouded in controversy when rival athletes complained about her surprise entry into the two-lap race.

The Scottish runner followed Adelle Tracey through the bell before unleashing a tremendous final 300m to win conclusively in 2:01.22 from 2017 winner Shelayna Oskan-Clarke followed by Tracey, Alexandra Bell and Lynsey Sharp. But not everyone was happy about Muir’s last-minute inclusion and after hearing about the disgruntlement several national newspapers focused their reports heavily on the spat.

On her race, Muir said: “I’m really happy because the strength in depth we have in the women’s 800m is so strong.”

Elsewhere on the track, Anyika Onuora clocked 51.95 in the 400m to hold off the fast-finishing Laviai Nielsen by four hundredths of a second.

The 400m hurdles saw Meghan Beesley cruise to 400m hurdles gold in 55.73 ahead of Kirsten McAslan, who clocked a PB and European Championships qualifier of 56.48.

Rosie Clarke similarly made light work of the barriers in her way as she enjoyed a runaway victory in the 3000m steeplechase. The 26-year-old clocked 9:45.84 to win gold by 23 seconds from Iona Lake.

The 1500m also saw a strong performance by Laura Weightman as she clocked 4:08.80 to hold off Jemma Reekie. “I just wanted to sit in and wait as long as I could and nail the top two, which was the main aim to get a place for the European Championships,” said Weightman. “I felt good on the last lap so I just sort of moved and I trusted my kick on the final 50m that I would come through.”

Speed was of the essence in the longest running event of the day, the 5000m, when Steph Twell kept her cool during a pedestrian early pace before unleashing a 60-second final lap to see off Melissa Courtney and Eilish McColgan in 16:07.25.

Amelia Strickler sprang a surprise in the shot as she threw 17.22m to beat the two favourites, Sophie McKinna and Rachel Wallader. Strickler is returning from a calf tear that ruined her Commonwealth Games build-up, too, so was delighted to win the British title.

Strickler said: “It feels absolutely amazing after the really rough year I have had.”

In the discus, Jade Lally took an impressive seventh title as she threw a European qualifier of 56.81m in only her second competition of the summer.

Laura Whittingham took the women’s javelin with 55.55m as she beat runner-up Emma Hamplett by six metres and Bethan Rees claimed bronze with 48.30m, while heptathletes Niamh Emerson and Katarina Johnson-Thompson also competed as they threw 43.95m and 39.98m respectively.

On the warm weather that lasted over the two-day event, Davies said: “This track is hot on a cool day so by the end it was like it was melting your shoes and I thought my feet were going to burn off!”

» See the July 5 edition of AW magazine for full coverage from Birmingham, while a day two men’s events report can be found here