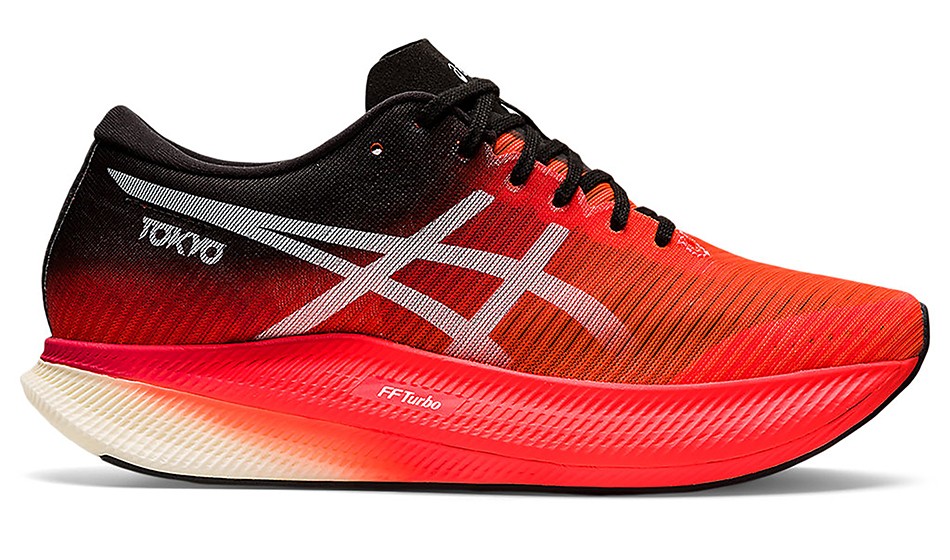 Beth Potter’s record-breaking 5km run this spring thrust this shoe into the spotlight, even before it was officially launched. The Metaspeed Sky was eagerly anticipated and considered by many to be a leading contender in the “super shoe” race. Having now tried this model for ourselves, we can indeed confirm it feels really quite special.

One of a collection of shoes to be launched over the coming months featuring carbon plate technology, ASICS have tailored the Sky towards athletes who increase their stride length as their pace increases.

The next model to be launched will be the Metaspeed Edge, which will suit runners who increase their cadence to increase speed. The differences between the shoes will be in the stack height of the cushioning, as well as the shape and positioning of the carbon plate.

The Sky has a deep cushioning stack (approx. 33mm in the heel dropping 5mm into the forefoot) yet remains very light at around 190g. The soft, cushioned feel is somewhat “bouncy”, although it remained surprisingly stable once up to full speed. It’s certainly a shoe for race day, with its overall geometry and carbon plate really taking effect once you settle into a suitably quick stride.

There’s plenty of outsole in the forefoot which provides good traction and improves durability, although we’d have liked to have seen a little more coverage in the heel area to prevent early signs of wear.

The upper is a single layer engineered mesh design. This keeps the weight down, is highly breathable and has a sock-like fit.

The Metaspeed Sky is certainly a very strong contender in the battle for road racing supremacy and one which will no doubt help to set more records in the coming months.

ICYMI, Eilish McColgan goes No.3 on the UK all-time rankings for 10km at the Great Manchester Run as Marc Scott wins the men's title. https://athleticsweekly.com/event-reports/eilish-mccolgan-and-marc-scott-victorious-at-great-manchester-run-1039949988/