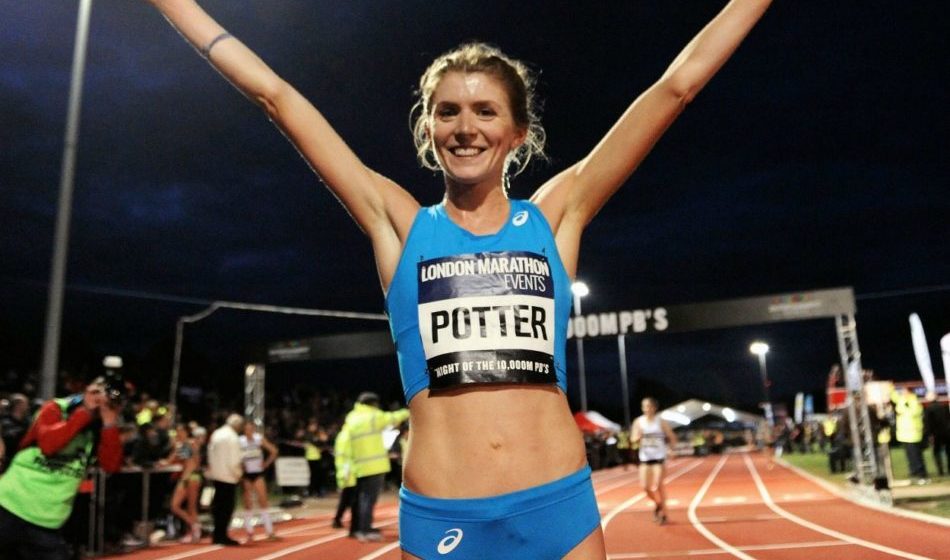 Triathlon specialist clocks huge PB of 14:41 at Podium 5km event in Lancashire but it is unlikely to be ratified as a world record

On a bizarre, confusing and controversial night in Barrowford, Lancashire, Beth Potter appeared to set a women’s world record of 14:41 at the Podium 5km.

Running in a mixed race on Saturday (April 3) and taking advantage of cool, still conditions on a flat course and wearing new Asics Metaspeed Sky shoes, the 29-year-old triathlete beat Beatrice Chepkoech’s official world record of 14:43 by what appeared to be a couple of seconds and sliced 10 seconds off Paula Radcliffe’s British record of 14:51.

One thing is certain, Potter ran the race of her life to smash her previous road 5km best of 15:24, which was set at the same Podium 5km event in August.

As the UK 10,000m champion on the track in 2017, she has great running pedigree too and athletics was her No.1 sport until she began to focus on triathlon in recent years. Potter also ran 10,000m in the Rio Olympics but switched to triathlon partly due to struggling to find support and sponsorship as a runner.

Clearly in great form, she won the Super League Triathlon Arena Games event at London’s Aquatics Centre last weekend too. Arriving in Barrowford with such fine fitness it looked certain with a lap to go that she was going to become only the third Briton to smash the 15-minute barrier for 5km on the roads after Radcliffe and Liz McColgan, but no one expected her to run quicker than the official world record as well.

When she crossed the line, though, the confusion began. Firstly the event has a licence from both Run Britain and the Association of Running Clubs (ARC). UK Athletics only recognise races that are licensed via Run Britain, with events sanctioned by ARC never appearing on the official rankings website Power of 10 for example.

Organiser Chris Barnes appears to have covered his event pretty comprehensively, though, by getting a permit from both bodies.

When it comes to world records, the global governing body will require that a number of factors were satisfied. As well as the obvious element of course accuracy – of which the Podium 5km has an excellent reputation incidentally – were anti-doping officers there, for example? Or the required number of qualified officials to sign-off the paper work?

World Athletics rules also contain stringent demands with regards measuring and re-measuring an event before the races unfold, the minimum and maximum size of laps and the potential elevation fall from start to finish.

AW understands the event will not have met these criteria and therefore Potter’s time will go down as the fastest women’s time in history in a 5km road race but will not be ratified as an official world record.

Then there is the confusing issue of 5km world records generally. The 5km road event has only been recognised as an official world record by World Athletics since January 2018. Prior to this the governing body did not recognise world records for 5km on the road and described them as ‘unofficial world bests’.

The quickest women’s 5km on record, for example, is thought to be Joyciline Jepkosgei’s with 14:32 during a 10km in Prague in 2017.

Siffan Hassan set the first official women’s world record with 14:44 in a women-only race in Monaco in February 2019 but 12 months later, in February this year and also in Monaco, Chepkoech ran 14:43 in a mixed gender race.

The 5km world records so far seem somewhat cursed too. When Chepkoech set her mark in Monaco two months ago, the cameras focused on second-placed Meraf Bahta for much of the way, believing she was the leader, with Chepkoech’s world record only announced belatedly after a delay.

The news of Potter’s possible record-breaking run could be similar, too, with neither World Athletics or British Athletics immediately posting any news about the performance on their social media channels. Naturally, social media is also awash with comments about her new shoes and the difference they might have made to her performance.

Potter aside, the overall quickest time of the night came from Tom Mortimer as he narrowly beat Phil Sesemann in 13:39 with Andrew Heyes third and Jonny Brownlee fourth as the top 10 broke the 14-minute barrier.

Completing a surreal day for road racing, this relatively small event had attracted betting interest from gambling giants William Hill, who opened a book on the men’s race and made Sesemann 10/11 favourite with Mortimer 9/2 second favourite.

Usually only major track and field championships and big road races like London Marathon attract official betting odds. But William Hill decided to create some odds for the Podium 5km event after seeing that the race organiser Barnes had put some fake odds on social media in the lead-up to the event merely for fun.

What odds might there have been on a world record, though?

Full results from the Podium 5km can be found here.