Tamberi turns on the style in Zurich 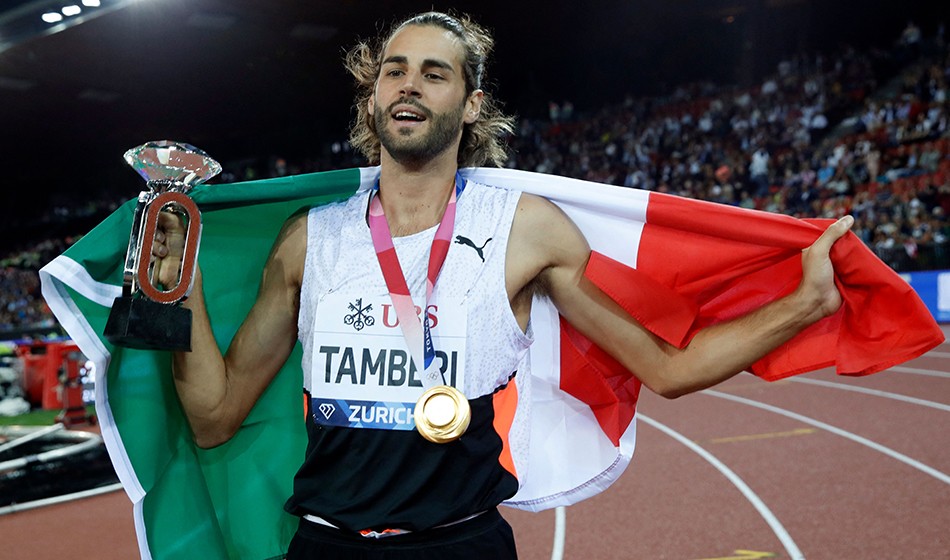 High jumper is among the top men’s performers on day two of the Diamond League finals as Mondo Duplantis, Timothy Cheruiyot and Fred Kerley also shine

With winners rewarded with $30,000, a Diamond trophy and a wild card entry into next year’s World Championships in Oregon, there was plenty at stake on the second day of the Diamond League finals in Zurich. But there was also a relaxed end-of-season atmosphere to the meeting as around 22,000 fans in the Letzigrund Stadium enjoyed the action.

It was an evening made for showmen and they do not come more flamboyant than Gianmarco Tamberi, the Italian high jumper, who shared gold in Tokyo with Mutaz Essa Barshim but here, in the absence of the Qatari athlete, took victory with 2.34m.

The crowd roared as he soared over the bar at his second attempt. In second, Andriy Protsenko of Ukraine jumped 2.30pm with third-placed Ilya Ivanyuk of Russia clearing the same height.

“I did not have fun competing without fans,” said Tamberi. “High jump is not that much fun without the fans. But this was amazing and I would compete even 50 times even if I am tired if we had the crowds like this. Zurich is the best.”

Timothy Cheruiyot gained revenge on Jakob Ingebrigtsen following his defeat in the Olympic 1500m final with a brilliant victory here in Zurich in 3:31.37 to the Norwegian’s 3:31.45.

After pacemaker Eric Sowinski led through 800m in 1:51.07, Stewart McSweyn soon took up the pace followed by Ingebrigtsen although Cheruiyot, who had sat off the early speed a little, moved up at the bell and led through 1200m in 2:49.33.

Around the final bend Ingebrigtsen was poised on Cheruiyot’s shoulder and tried to power past the Kenyan in the final 100m, but Cheruiyot found enough strength to hold him off as Ingebrigtsen dipped in vain for the finish line. 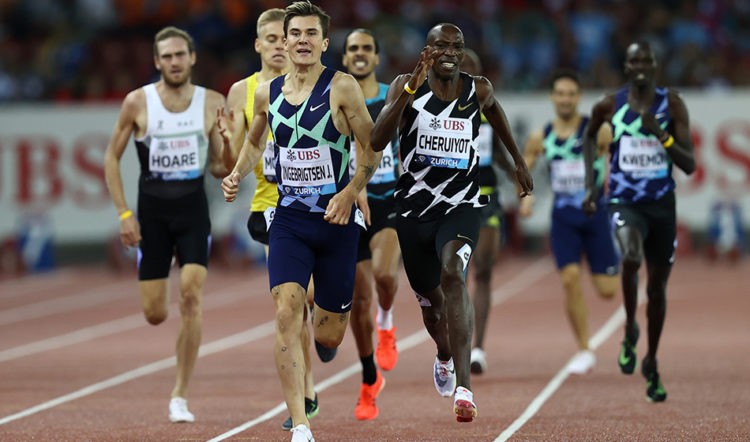 Cheruiyot said: “I was having many challenges in Tokyo, so now I am getting better. My hamstring is getting better and I am prepared for next season.

“My goal is that I know I need to defend my world title at next year’s championships. That is my target now, but I need to work out because I know Jakob is going to continue to get better.”

While Norway could not celebrate a Diamond League victory in the 1500m, they could in the men’s 400m hurdles.

Karsten Warholm set off in his usual aggressive fashion and led into the home straight from Alison Dos Santos of Brazil and Kyron McMaster of the British Virgin Islands. Unlike Tokyo, there was no world record but Warholm maintained his form for a 47.35 win as Dos Santos clocked 47.81 and McMaster 48.24 as Chris McAlister of Britain ran 49.73 in seventh.

Mondo Duplantis was in supreme form again as he won the pole vault with 6.06m from Sam Kendricks and Timur Morganov, who both cleared 5.93m.

Several minutes after the international broadcast feed ended, the Olympic champion had a crack at a world record height of 6.19m, too, with many leading athletes like Warholm and shot putter Ryan Crouser clapping him in unison during his attempts. However it was not to be for the Swedish star as he bowed out with a mere victory and no record.

“The main goal today was just to win that Diamond as I have not done it yet,” Duplantis said. “And I am really happy with the way that I jumped.

“I would have loved to break the record and I really felt like I have it in me this season so I think I am going to look back at the season and I am not going to have too many complaints.

“Anytime I am able to jump six metres, I cannot complain. Mission accomplished.”

The men’s sprints have been overshadowed by the women’s 100m and 200m in 2021 but the Diamond League finals still produced some sizzling times. American Fred Kerley ran 9.87 (0.4) to beat Olympic 200m champion Andre De Grasse of Canada by two hundredths of a second in the 100m with Ronnie Baker third in 9.91 and Trayvon Bromell fourth in 9.96.

On a night of close finishes, the top two men in the 110m hurdles could not be separated on the clock. Devon Allen of the United States and Ronald Levy of Jamaica were both given 13.06 (0.6) but the photo finish judges gave the verdict to Allen as the Olympic champion Hansle Parchment was third with 13.17.

There was another close finish in the 400m as Michael Cherry pipped Kirani James by one hundredth of a second. In a dramatic finish the American dived at the finish line to clock 44.41 to beat the Grenada sprinter. 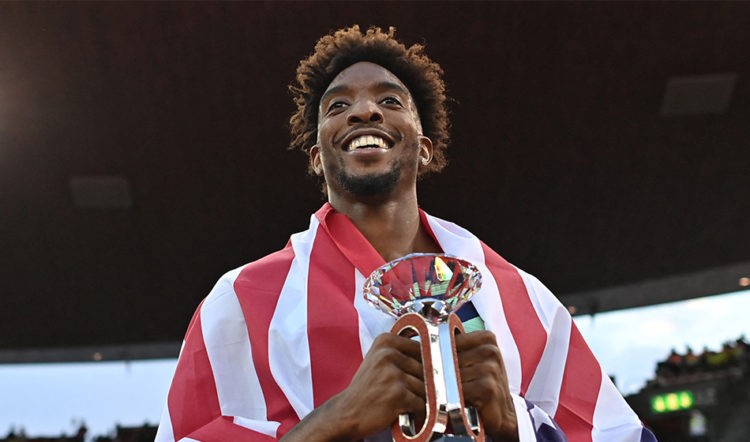 In the men’s throws, Daniel Stahl took the discus with 66.49m while there was a German one-two in the javelin as Johannes Vetter threw 89.11m to beat Julian Weber’s 87.03m.

In the triple jump, Pedro Pablo Pichardo continued his fine form as he won easily with 17.70m (0.8). The Portuguese athlete won by half a metre from Hugues Fabrice Zango of Burundi.

Olympic one-two Emmanuel Korir and Ferguson Rotich repeated their result from Tokyo as they clocked 1:44.56 and 1:44.96 respectively here ahead of American Clayton Murphy as Britain’s Elliot Giles was fifth in 1:45.25.

Earlier in the night in the non-Diamond League events, Efe Okoro won the 400m hurdles B race in a PB of 49.34 to go No.2 on the UK rankings for 2021 behind Chris McAlister.