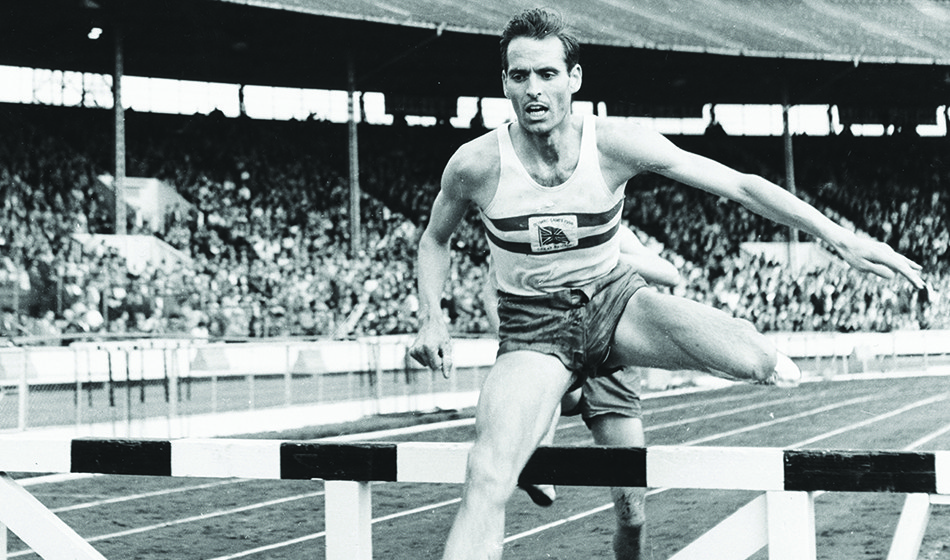 Olympic steeplechaser first featured in AW in 1946 and still appears in our results today aged 91. But few are aware of his remarkable background

Eric Shirley’s name first appeared in the pages of AW in February 1946, when the magazine was just three months old. Aged 16, he won the Middlesex youths’ cross-country title in Cranford and, amazingly, his results are still being published today as an athlete in the over-90 age group.

“I do remember it distinctly,” he says, casting his mind back to his teenage triumph three-quarters of a century ago. “It’s one of the races I remember above all else because my club Wigmore Harriers also won the team title that day.”

Shirley went on to compete in the 3000m steeplechase at the 1956 Olympics in Melbourne and 1960 Games in Rome. He finished eighth in Melbourne and exited in the heats in Rome, but he also won three AAA titles with his best time of 8:47.6 run on the cinders of the White City in London in 1955.

Yet that is only half the story.

Shirley endured a bleak childhood before eventually making a success of himself. As he reflects, someone with his background ended up in the army or prison. But instead he became one of the best endurance athletes of the 1950s and aged 91 he is still going strong after having out-lived most of his old track rivals.

Shirley was born into a workhouse in Epsom on April 3, 1929, to a 19-year-old single domestic servant. Almost immediately, he was given away with no formal adoption to a middle-aged Irishwoman before being sent at the age of nine to live with the woman’s childless sister in a damp and miserable shack near Abbeyleix in Ireland.

There was no gas, electricity, running water or toilet facilities and, even now, he finds it difficult to talk about. “It was very, very painful,” recalls Shirley. “But I must give myself some praise for having the guts to pull myself out of the gutter, which is where I was.”

Shirley’s son, who is also called Eric and a former high performance centre manager at Lee Valley, says: “There were no social services. He was sent from pillar to post. His background is brutal.”

Shirley Jnr has visited where his father grew up in Ireland and says of the shed that he slept in: “You wouldn’t keep your garden tools in it, let alone a human being. It really was Third World. As my father has got older, more has been revealed and it’s never good listening.”

Despite this, Shirley does not stop smiling during our interview and on an upbeat note reflects: “Life has been a rollercoaster but it’s good now. Everyone has their ups and downs.”

After half a dozen traumatic years in Ireland, Shirley returned to London aged 15 to stay with the Irishwoman who had originally looked after him. He had no formal education or money but simply a burning desire to make friends and lose the Irish accent he had acquired because, at the time, it was a handicap when it came to finding a job.

In search of company, he joined Wigmore Harriers (now known as North London AC) on Hampstead Heath and off barely any training won the Middlesex cross-country title, leading to that first appearance in AW.

Why did he choose athletics? “I had to seek company,” he remembers. “There was a club nearby and I thought I’d join it – it was as simple as that. I also wanted to make my mark at something. I knew I wasn’t going to be a doctor or a scientist. So I thought that athletics might be for me and I was determined to be good at it. As it turned out I was fairly good at it and because of my background that gave me some pride and self respect.”

After a two-year break from athletics to do National Service in the Bedfordshire & Hertfordshire Regiment, Shirley got back running in 1950 and, after training mainly on Hampstead Heath, he won the Middlesex senior cross-country crown in 1953.

Showing good speed at shorter distances, he was advised to try the 3000m steeplechase and in 1954 became the first Englishman to break nine minutes. That same year another famous barrier was broken – the four-minute mile at Oxford University’s Iffley Road track. Oxbridge students such as Roger Bannister dominated British athletics at the time, but Shirley did not have much in common with them due to his working-class upbringing. He was a real-life Alf Tupper, although instead of eating fish and chips in the north of England he had grown up with potatoes and cabbage in Ireland.

When called up for his first international match, for example – for Great Britain versus France in Bordeaux – Shirley was told by team manager Jack Crump that he had to wear a blazer to travel. The problem, though, was that he could not afford one. So Crump promptly sent him to his tailor in Ealing where he was given a blazer. He won the race, too. 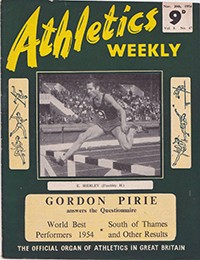 Going from strength to strength, Shirley beat world record-holder Jerzy Chromik of Poland and most of the world’s leading steeplechasers at the White City in 1955. The following year he won the first of his AAA titles, but glory eluded him in Melbourne.

Arriving a couple of days before his competition, he won his heat easily but jetlag then hit him hard for the final as he finished 16 seconds behind the winner, Chris Brasher, who had been out in Australia for several weeks acclimatising.

Imperfect preparation was also an issue four years later at the Rome Olympics. Along with Gordon Pirie and others, British runners were denied permission to acclimatise because it was seen as gaining an advantage and in the Italian capital Shirley faded to 10th in his heat.

Despite turning 91 this year, Shirley has been itching to compete. Last year he won the 200m, 400m, 800m and discus at the British Masters Championships. He has run the Bushy parkrun in recent years in just outside half an hour and has become a regular at the annual Olympians’ Mile at the Westminster Mile event, too, although the latter was one of the first events to be called off this year due to coronavirus.

“It’s been very frustrating,” he says of 2020. “The trouble is that if you don’t have anything to look forward to then it’s difficult to have the motivation to train and that applies to everybody, including our senior internationals. You have to have a target. But I try to keep going.”

How has his training gone lately? “Spasmodically,” he replies, “and it’s getting more difficult as the years roll by.”

In self-deprecating manner, he says: “I now just waddle around. I am not too enamoured with the pictures that have appeared of me recently. I just wonder who this old man is these days.”

But he adds with a wry smile: “Vanity keeps you going. You have to have vanity and pride!” 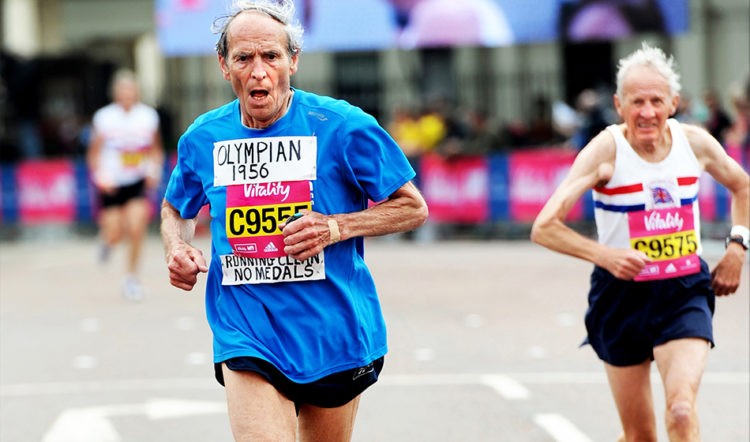 Shirley has the ability to surprise as well. When I ask him what his finest moments were on the track, he admits: “Athletics was never a number one in my life. The priority in my life was my family and staying in work and earning a living. Athletics then was not what it is now where you can sit at home all day and be paid for it as a career. Back then it was a hobby.”

Given his immense longevity, what are his secrets? He cites a love of the sport, his competitive nature, being a clean athlete, training consistently and never neglecting speedwork. “Also, my frugal lifestyle,” he adds, explaining that these habits are a remnant from his childhood. Even now, he tells me, he struggles to eat a large meal.

Shirley has witnessed big changes over the years. These include the growth of women’s athletics and he believes male and female world records will one day be similar. “Women are tough!” he says. “The day will come when there will be a par between men and women. No question about that in my mind. You only have to look at horse racing. But it won’t happen in your lifetime or mine.”

Not short of some feisty views, he believes access to athletics tracks should be free to use. “The tracks are empty today,” he says. “In my day there was no charge, you could just turn up and run – and the tracks were full.”

In addition, he says more leading middle-distance runners should give the steeplechase a go and well-known international athletes should “give more back” to the sport by racing in domestic events and training alongside club athletes.

One of Britain’s finest endurance athletes, Shirley’s performances have stood the test of time. More remarkably, he is still racing into his 90s.

He was dealt a poor hand from birth and had plenty of barriers in life long before he encountered the wooden hurdles that he eventually faced on the track. To overcome such disadvantages at an early age and to rise to the status of Olympian is a phenomenal feat.

He is not finished yet, either. “Who knows when the pandemic will stop?” he says. “But the problem now is that youngsters of 90 will be coming into my events and I’ll be competing against younger people. They will be fit and strong, so I’ll have to be in top form to win my age group!”

Clearly the competition continues to drive him. But what is the main thing that gets him out the door most days to train?

“Habit,” he replies without hesitation. “It’s lovely to be able to run. It’s exhilarating. To be able to do it. That’s the thing. I feel sympathy for the people who can’t do it as they are missing so much.” 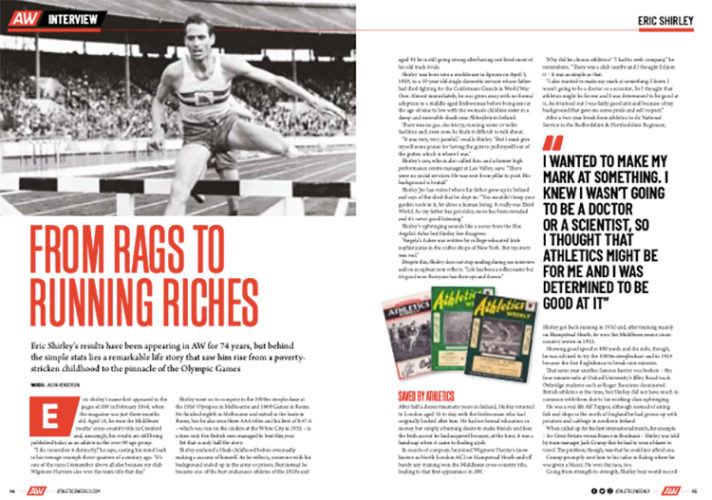