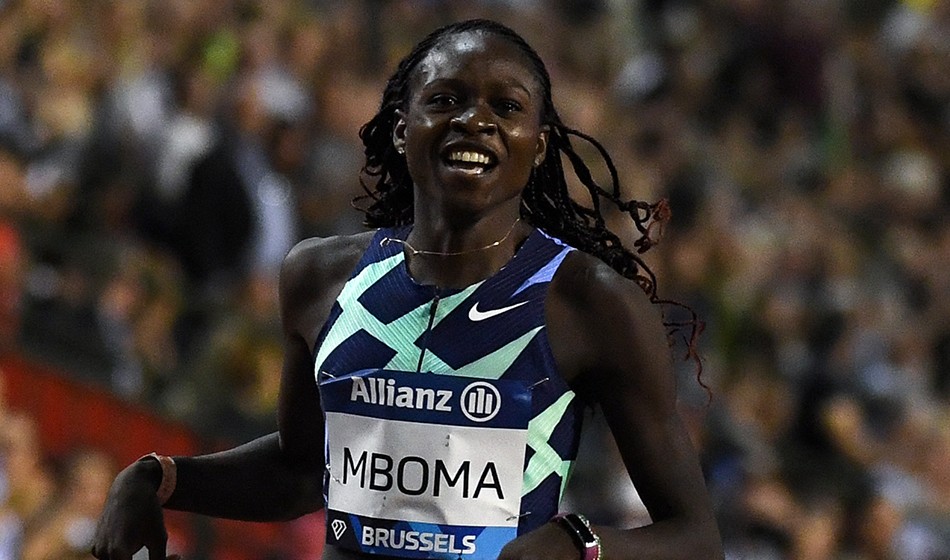 The Wanda Diamond League in Brussels on Friday (Sept 3) saw some great endurance races though it was the women’s 200m won by Christine Mboma which was the best quality event.

A few months ago you would have got long odds that the only one of the top four in this women’s 200m who made the Tokyo half lap final was promising junior 400m runner Christine Nboma.

The Namibian, who started the season with a 25.05 PB and went into Tokyo with a 22.67 PB, was a superb second in Japan in a world junior record of 21.81 and followed that up with a world under-20 title in Nairobi in 21.84 and she was too strong for her opposition in her Diamond League debut in the Belgian capital.

Only fourth into the straight, none of her rivals could cope with her powerful last 50 metres and she won by a metre with another 21.84.

Mboma, who had to step down to 200m due to World Athletics’ rules relating to naturally high testosterone levels in women, said: “It was my first Diamond League experience and to be able to win in such a strong field is great.

“It has been a very tough and busy season with the Olympics and the World Junior Championships, but I’m still in good shape. I ran almost a personal best today, so that pleases me. I still have one race to go in Zurich .”

Second was Olympic 100m bronze medallist Shericka Jackson, who exited in the heats in Japan at this event after foolishly easing off prematurely when clearly having an excellent medal chance. She ran far more sensibly here and her 21.95 gave her a similar margin over world champion Dina Asher-Smith.

The Briton ran an excellent bend and held her form well and, after missing the event in Japan, the time was an encouraging season’s best of 22.04 which was her third fastest time ever and only beaten by her world and European wins in Doha and Berlin.

She said: “I’m so happy with my race! I ran a season’s best and had a good feeling. It felt so good to be here and to be able to run this fast.

“I worked so hard after my injury to return and feel strong again. I really love to run here in Brussels. I still have a few races to go so I hope I can improve myself and feel good. The relaxed feeling is back so I’m very happy with that.”

Sha’Carri Richardson was absent in Tokyo due to her recreational drug suspension and the American showed better form than she did at the Pre Classic after the Olympics with a 22.45 clocking which just about held off the challenge of Olympic finalist and world under-20 runner-up Beatrice Maslingi’s 22.50.

Britain’s best event of the night though was the women’s 800m where they took two of the top three places.

The opening lap from pacer Noelle Barigo was a little too fast in 56.99 and Natoya Goule took the pace up with 300m to go but the pace had clearly dropped as the Jamaican led through 600m in 1:28.2 with all eight remaining runners well inside 1:29 and closely bunched.

As they hit the straight Goule found a good acceleration but still seemed vulnerable to Olympic silver medallist Keely Hodgkinson, who looked strong right on her shoulder.

Curiously, Hodgkinson drifted out into lane three in the straight as Goule held a tight lane in lane one and the Briton fell a few feet short with a 1:58.16 to Goule’s determined 1:58.09 which can almost certainly be put down to the longer distance run on the second lap.

It was still the Briton’s third fastest time though after her British record of 1:55.88 in Tokyo and 1:57.51 in Stockholm. 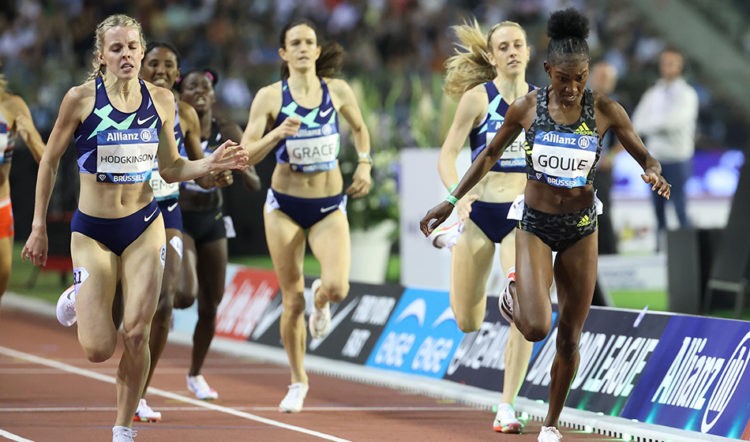 Goule said: “I’m just so excited and happy to win my first Diamond League race. I have a lot of respect for Keely. She’s so good and humble, a very good athlete and still so young. So I’m very happy I could still sprint and take the win.”

Hodgkinson said: “I really wanted that win today. I came really close, but Natoya is class.

“This season was a whole new experience. I am not used to this. But is has been a dream. To achieve all these amazing things is unbelievable.”

Jemma Reekie maintained her consistent form which briefly saw her as World Athletics top ranking two-lap athlete post Olympics with a third place in 1:58.77 – her fifth sub-1:59 of the year.

A few years ago Francine Niyonsaba would have looked to have run the 800m but now she is showing her future is in the longer distances. She was in action in the 5000m – an event she was disqualified from in the Olympic heats – and she showed what might have been as she continued her great post-Olympic form.

The slow pace woke up a little on the penultimate lap as Obiri ran a 68.29 and then pushed hard. Down the back straight Niyonsaba looked like she might be losing her recent winning streak as she was back to fourth.

She was still fourth as she hit the straight but she was quickly past Margaret Kipkemboi and in third and then ran past Obiri. It took a little more effort to pass 14:14.09 performer Ejgayehu Taye but she sprinted by as she completed a 59-final circuit and 2:43 last kilometre.

She said: “I enjoyed every second of it and the national record is the cherry on top. I still do not know if I like the long distance more than the 800m, but I love challenges.”

Eilish McColgan looked comfortable until the acceleration into the bell and she was easily first European in 14:31.26 in seventh to miss her British record by just over two seconds as she ran a last lap of 64 seconds well clear of Germany’s Konstanze Klosterhalfen’s 14:35.88.

European athletes fared better in the 100m hurdles as Netherlands’ Olympic fifth placer Nadine Visser had her greatest outdoor win to date as she pipped Tobi Amusan with a strong second half as both were timed in 12.69.

Megan Tapper took third in 12.77 just ahead of Cindy Sember with the Briton showing good form with a 12.79 in fourth.

More predictable was a European win in the high jump which saw three athletes clear two metres. Yaroslava Mahuchikh, a disappointing third in Tokyo, was certainly not favourite when she only cleared 1.95m at the third attempt. She only got over two metres at the second attempt while Olympic champion Mariya Lasitskene maintained her perfect record over her six heights up to that point.

However when the bar went up to 2.02m, Mahuchikh got over at the first attempt. Lasitskene moved the bar up to 2.04m but that was beyond her but she did beat Olympic silver medallist Nicola McDermott on countback as the Australian was over two metres again. 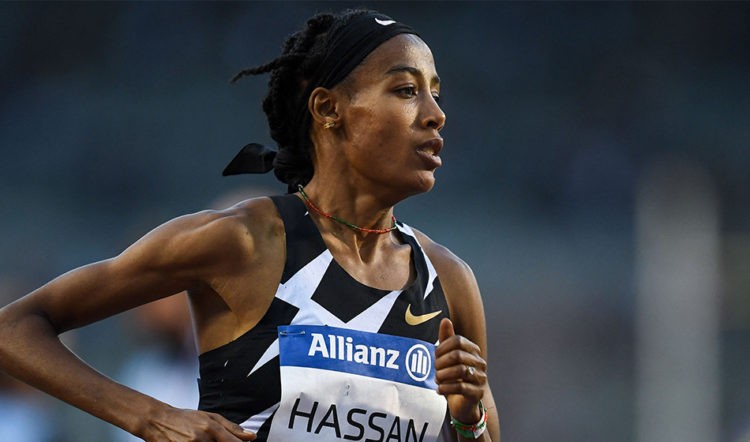 Sifan Hassan took 11 seconds off the world-leading time and two seconds off Faith Kipyegon’s meeting record in the mile.

For an athlete who had run six races in nine days in Tokyo and looked tired in the Pre Classic 5000m, she kept her form well to win in 4:14.74. It was the fifth fastest time in history and gives the Dutch athlete three of those top five times.

Hassan said: “After Tokyo I was so tired so I just wanted to run the short distance. My goal was to run fast here tonight and that is what I did. It is a beautiful time.”

Ethiopian Axumawit Embaye won the battle for second in 4:21.08 while Linden Hall set an Oceania record in third of 4:21.38 with the next four led by Marta Perez setting PBs.

Mondo Duplantis was another Olympic champion in form but not quite world record-breaking form. The Swedish pole vaulter cleared a meet record of 6.05m to beat Chris Nilsen of the United States (5.85m) but went on to fail attempts at a world record of 6.19m. 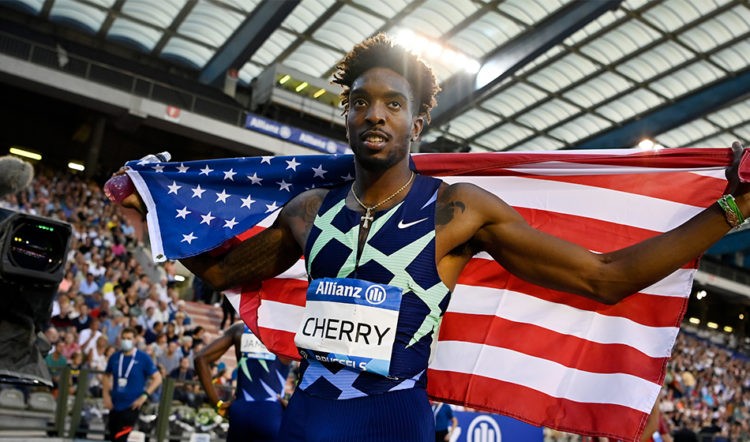 Stewart McSweyn’s fine season continued with a win in the men’s 1500m as he clocked 3:33.20 ahead of fellow Australian Oliver Hoare (3:33.79). Spain’s Mohamed Katir had led into the home straight but faded to seventh.

Jakob Ingebrigtsen was missing from the metric mile and fellow Norwegian Karsten Warholm had pulled out of the 400m hurdles. This allowed Alison dos Santos to enjoy victory in 48.23 ahead of Kyron McMaster.