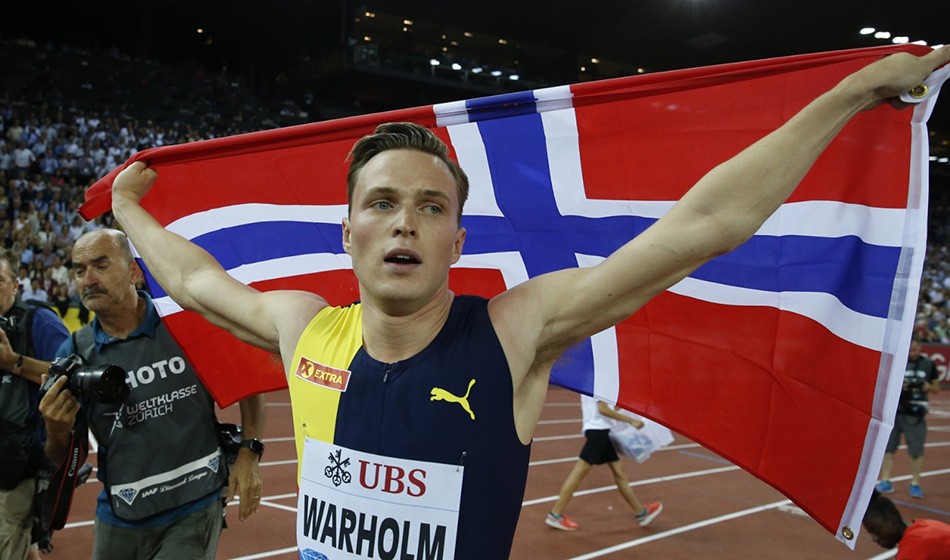 Norwegian goes to No.2 on world 400m hurdles all-time list as 16 Diamond League champions are crowned at Weltklasse meet

The world 400m hurdles all-time list was rewritten on Thursday evening in Zurich as a thrilling night of IAAF Diamond League finals action came to a close with an historic men’s 400m hurdles clash.

The head-to-head between Karsten Warholm and Rai Benjamin didn’t disappoint as in an incredible battle the pair pushed each other to second and third respectively on the global all-time rankings, both dipping inside 47 seconds – not surprisingly the first time two athletes have ever done so in one race.

World champion Warholm threw his right arm out to help propel him over the line, clocking 46.92 to become the No.2 in history behind Kevin Young with 46.78 from 1992, while Benjamin’s 46.98 improves on his previous best of 47.02 as he remained equal third on the all-time list but with a lifetime best 0.04 quicker.

“It was crazy,” said Warholm, whose previous European record was 47.12.

“I knew that I would do a good time but this race and with this new PB, it’s just amazing and still the best will come.

“In a way, I’d like to say goodbye and see you next season but it’s the World Champs, the biggest thing this year.

“This race was so close, it could have gone both ways. I push him (Benjamin) and he pushes me. It’s amazing.”

More than a second and a half behind the top two, Kyron McMaster was third in 48.58, with Yasmani Copello fourth in 48.58.

THAT WAS ABSOLUTELY INCREDIBLE.

There was no such head-to-head battle in the women’s race as 20-year-old Sydney McLaughlin secured a big win, clocking 52.85 to lead a US top three. Behind her, Shamier Little was second in 53.86 and world record-holder Dalilah Muhammad third in 54.13.

McLaughlin’s time is the second-fastest this year behind Muhammad’s record 52.20.

There are reports that a request for an Olympic schedule change to allow for a women’s 200m and 400m double in Tokyo is under review and should it be accepted, Shaunae Miller-Uibo would surely be favourite to do the double.

Another superb run saw the Olympic 400m champion power down the home straight and clock a Bahamian and Diamond League record of 21.74 to take the 200m title ahead of Britain’s triple European champion Dina Asher-Smith, who got a strong start and finished second in a season’s best and UK lead of 22.08.

“That’s the fastest I’ve ever run going into a major championships so it bodes well for the Worlds.”@dinaashersmith speaks with @stuartweir after her 22.08 for second in this evening’s @WeltklasseZH 200m. Report ➡️ https://t.co/be12YPyIwI #ZurichDL pic.twitter.com/wsH8G5eBqk

Noah Lyles also continued his winning ways, getting the 100m title in 9.98 after his 200m Paris win.

Xie Zhenye was second in 10.04 and Yohan Blake third, as Justin Gatlin was fourth and Brits Zharnel Hughes and Adam Gemili sixth and seventh, both clocking 10.15.

An exciting 800m saw another US victory as Donavan Brazier blazed down the home straight to overpower an unsurprisingly tiring Nijel Amos. 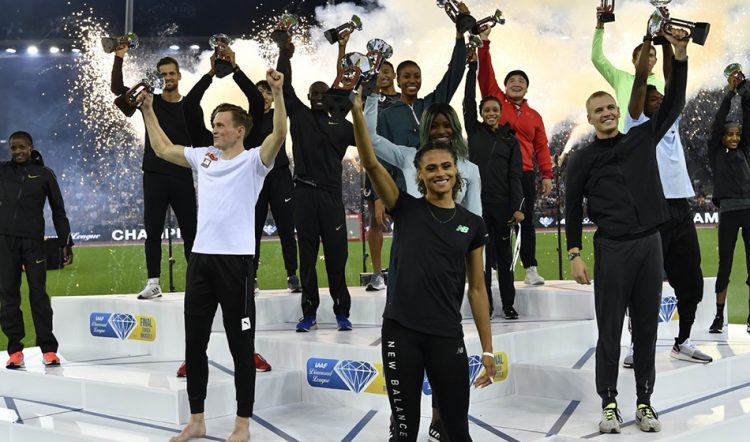 World cross country champion Joshua Cheptegei solo ran his way to victory in the last men’s Diamond League 5000m, running a PB of 12:57.41 and holding off Hagos Gebrhiwet with 12:58.15. British champion Andrew Butchart was 11th in 13:24.46.

World indoor champion Juan Miguel Echevarría leapt out to 8.65m in the very first round of the long jump and didn’t need to record anything else to take a big win ahead of Ruswahl Samaai and Tajay Gayle, both with 8.20m

Shanieka Ricketts won the triple jump trophy thanks to her PB of 14.93m to beat Yulimar Rojas with 14.74m, while Sam Kendricks cleared 5.93m to win the pole vault ahead of Mondo Duplantis with 5.83m.

There was a dominant victory by world silver medallist Salwa Eid Naser in the first Diamond League track event of the evening. She clocked 50.24 to win the 400m and retain her trophy, with Shakima Wimbley almost a second back in 51.21 for the runner-up spot. British champion Laviai Nielsen finished fifth in 51.70.

Beatrice Chepkoech also retained her title, winning the 3000m steeplechase in 9:01.71 and leading a Kenyan top four. Gesa-Felicitas Krause ran a German record of 9:07.51 in fifth, while world champion Emma Coburn was sixth in 9:10.01.

Another impressive run by Sifan Hassan saw her power away in the closing stages to clock 3:57.08 and win the 1500m as multiple global gold medallist Genzebe Dibaba faded to fourth.

Konstanze Klosterhalfen was second in 3:59.02, while Gabriela DeBues-Stafford – who is a training partner of British record-holder Laura Muir – placed third in a Canadian record of 3:59.59.

Gong Lijiao won the shot put with a world lead and meeting record throw of 20.31m. Andriy Protsenko cleared 2.32m to win the high jump, with reigning world champion Mutaz Essa Barshim clearing a best of 2.20m as he continues his comeback after injury, while Lyu Huihui took the women’s javelin title with a throw of 66.88m and Magnus Kirt the men’s with 89.13m.