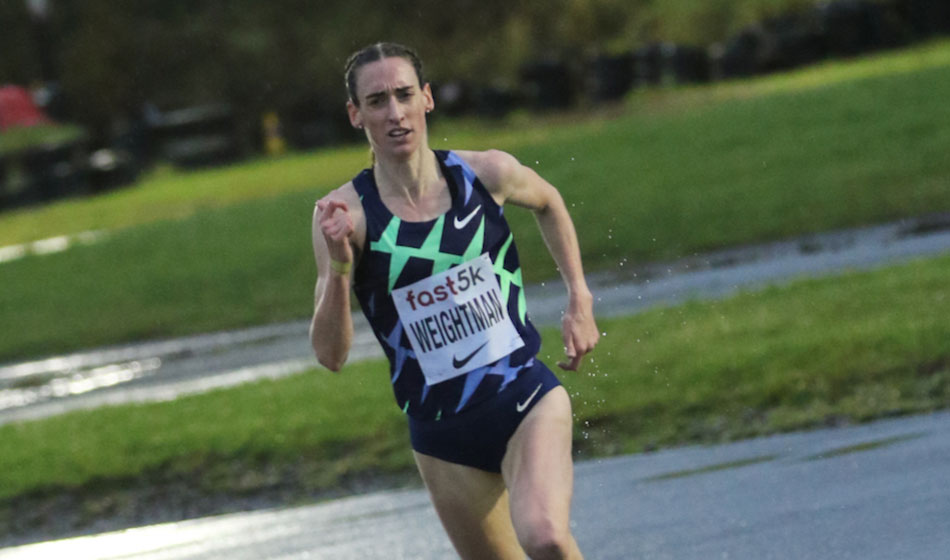 Laura Weightman admits that contesting the 5000m at the world championships for the first time last year was an “eye-opening” experience.

A Commonwealth bronze medallist over the distance in 2018, the 29-year-old is still a relative newcomer to the event and realised in Doha just how much work there was to be done.

Ready to get to stuck into the task at hand, she was forced to bide her time in 2020 but this disrupted season has brought success, served a healthy dose of self-confidence and also left the Morpeth Harrier feeling better equipped to take on the world’s finest.

Weightman’s work during lockdown paid off as she moved to second on the UK all-time lists when opening her season with third place and a time of 14:35.44 at the Diamond League in Monaco in August.

That she was able to mix it so well with a field which included world champion Hellen Obiri was precisely the sort of boost and indication of performance improvement which had been needed.

To begin with, the cancellation of events in 2020 was a source of concern and frustration.

Taking a longer-term view has proved to be not just important, but beneficial.

“Coming off the back of Doha really strong, my first world championships over 5000m, I really wanted to take that momentum forward into 2020,” says Weightman, who finished seventh in the Khalifa Stadium.

“But, at the same time, I’m very new to the event so I’ve had to take the positive view of another year of experiencing more 5000m training, experiencing more world class 3000m and 5000m races – that’s only going to benefit me in the long run.

“Hopefully I can take the momentum and be in a stronger position – to not be as afraid of the 5000m going into next year because in Doha it was a massively eye-opening experience for me, being flat out from the start, racing some of the best in the world and not really being able to be competitive in that setting.

“I think this year has shown that, another year stronger, I can get a little bit closer to the best in the world. Hopefully next year I can be even closer and more competitive.”

A change in mindset and the ability to be adapt has helped greatly.

“When we realised the Olympics weren’t going ahead and it was touch and go whether we’d have a track season we just went back to a bigger winter base,” she adds. “We did some time trials in training – over 8km, 5km and two miles – just to give me that competition element because I am definitely motivated by competition.

“We sadly weren’t on the track for about three months so we did a lot of volume on the road and the grass. I thank that probably only made me stronger.

“We had to back off in some areas because we had to be careful not to overdo the miles and get too carried away because you didn’t have that medical support if something went wrong.

“But, come June time, when Monaco was being confirmed as going ahead, we said ‘right, that’s kind of like your world championships for this year so let’s got all in on that one. If that’s the only race you get let’s make it count’.

“At that point, when you’ve had two to three months in lockdown, that was a massive motivator to keep going and not give up on the work I’d put in.

“It was about adapting, re-evaluating those goals and thinking about what we wanted to get out of this year.”

Weightman has managed to get plenty. Not only has her longer distance performance improved – she finished her season by winning the fast5k earlier this week in 15:10, a time which places her third on the UK all-time 5km standings – but she also got incredibly close to her 3000m PB of 8:26.07, not to mention taking her 1500m best down to 4:00.09 and becoming British champion in the event.

Weightman still has unfinished business with a discipline over which she has competed at two Olympics and won two European bronze and one Commonwealth silver medal, but she is enjoying the change in focus towards 5000m.

“I’ve nearly achieved everything I want to in my 1500m career,” says the Steve Cram-coached athlete, who will be on 10,000m pacing duties in Hengelo on October 10. “In Berlin this year, had I got that 0.1 of a second off that PB and got that sub-4 it would have massively ticked that box but I’ve achieved so much in that event and 5000m is an event I’m really excited to explore.

“That’s not something I thought I would have said two or three years ago but it’s definitely an event I feel like I’ve got potential in.

“I didn’t want to make that move too soon but I think it’s the perfect stage in my career where I can up my training that little bit more and really explore that endurance potential that myself and Steve believe I have.

“I think that, in the last couple of years, my performances have shown that I’m slowly tapping into that. But I’m still going to be running some 1500m races because I’m determined to run that 3:58/3:59 one day.”