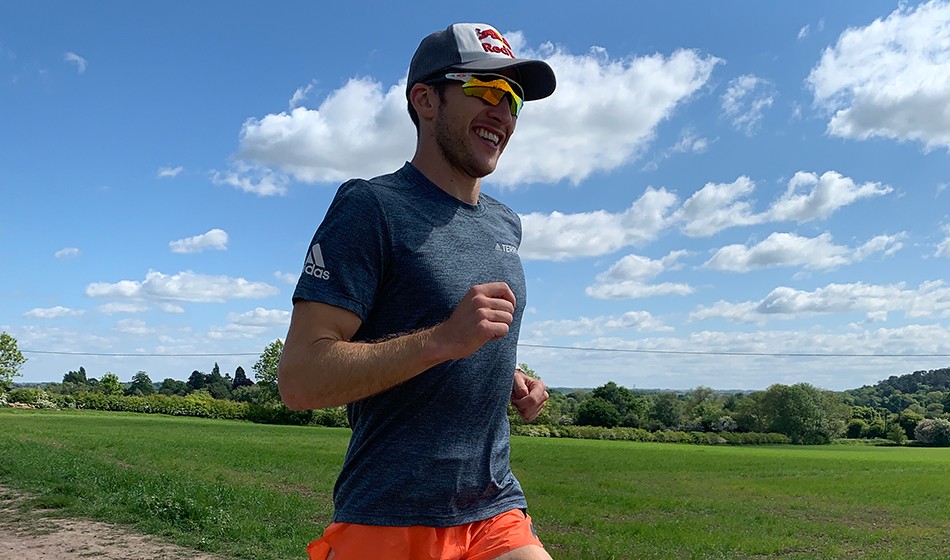 From trails to the treadmill, it is now an Olympic target which is helping to keep the British ultra runner on track during lockdown

Tom Evans appreciates that his route into marathon running is not a particularly conventional one. His is an athletic journey which was born from a bet and has since involved miles upon miles and countless climbs, some treacherous trails, a bit of track and recently lots of treadmill.

“I stepped in at stupid ultra marathons and now I’m dabbling back down,” smiles the former British Army captain.

They say variety is the spice of life and that certainly rings true for Evans. The 28-year-old has excelled over all types of terrain and distance since signing up for the 2017 Marathon des Sables following that fateful wager with his friends, going on to finish third in the gruelling six-day, 251km race across the Sahara desert.

The following year he won the 101km CCC, which is part of the Ultra-Trail du Mont-Blanc race series, and claimed bronze at the Trail World Championships in Spain.

Then there was his third-place finish at last year’s Western States – his 100-mile debut – before he formed part of Britain’s gold medal-winning senior men’s team at the European Cross Country Championships in Lisbon.

On to 2020 and Evans started the year with a course record-breaking win at the 102km Tarawera Ultramarathon in New Zealand and followed that up with third at the UK Inter-Counties Cross Country Championships.

Then the coronavirus crisis hit. 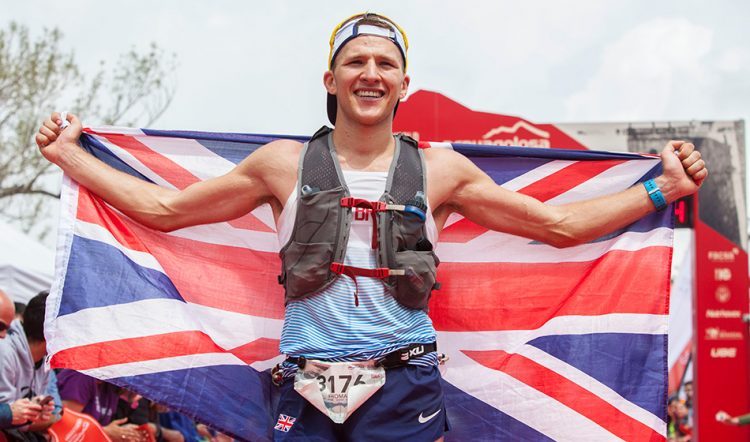 One of his goals for this summer was to do an ‘FKT’ – fastest known time – for the Three Peaks Challenge, taking on the highest mountains in Scotland, England and Wales. When the pandemic stopped Evans from doing it for real, he took to the treadmill and aced that, too, climbing and descending the equivalent elevation gain and distance of Ben Nevis, Scafell Pike and Snowdon during one continuous four-and-a-half hour effort.

With all of his races through to September either cancelled or postponed and with lockdown limiting the type of training he has been able to do, Evans switched his focus.

Driven by goals and challenges, but mindful of staying safe, he turned his attention to the road. And not just any road. Ultimately, it could lead him to the Olympics.

Now based in Loughborough with his professional triathlete girlfriend Sophie Coldwell, their dogs and a new brood of chickens, Evans recently changed coaching set-up from Allison Benton and the AB Training Group in East Sussex to Andy Hobdell and a more local training group which includes Irish Olympian Kevin Seaward.

“It was so great to have Allison and the group and there’s no way that I would have done what I have done now without their support,” explains Evans, who now lives a mile from the track and just 350m from trails. “It was a really hard choice but I’m really looking forward to working with Andy into the future and seeing what we can achieve together.

“It’s really nice to have a group environment, when we get back to that. To be able to do sessions with people will be great and to train with people who have achieved the things that I am aspiring to do. I remember watching the Rio marathon on TV and seeing Kev there and thinking: ‘one day, what if?’ Now, to be able to train and see what it takes is incredibly motivating and inspiring for me.”

His target now is next year’s Virgin Money London Marathon, which currently looks set to host the British trial for the postponed Olympic Games marathon.

On the ambition of racing for a GB team place, Evans says: “I would definitely be lying if I said that it hadn’t crossed my mind.

“Where I am now, I’m really looking forward to just getting into training and seeing what happens. I have got no idea if actually my niche is the 100km distance. I have done well at 100km and I have done well at 10km and cross country but I’ve never done well in between that. So, who knows? Marathon may be the sweet spot, but I guess I won’t know until I have tried it.”

Under the original selection policy released for this year’s Games, the top two finishers at the trial would be guaranteed selection, provided they had also achieved the qualifying standard of 2:11:30.

“If London does turn into a trial race then that’s what happens and if it’s a really miserable, rainy, windy, cold day, actually my experiences on the trails will probably help for something like that,” adds Evans. “Or if it’s a really hot day, it’s kind of the same. But if it’s perfect running conditions and you’ve got guys who are going out much faster, then maybe not. But a race is a race. It has crossed my mind. It’s not the sole reason that I’m doing it but I am certainly thinking about it going into training sessions.

“It’s interesting,” he continues. “If you take three current British marathoners, for example Callum Hawkins, Mo Farah and Jonny Mellor, historically they have come up from shorter distances, a bit of cross country, lots of time on the track and road and then into marathons. Whereas I stepped in at stupid ultra marathons and now I’m dabbling back down.

“So I’ll spend the next 10 months in a marathon set-up before London, hopefully run a half-marathon at the end of this year and get set up nicely for going into 2021. Then I will look to race London Marathon next year and see what happens from there.

“It’s quite nice for me to not have the pressure going into races like this where people, they don’t look down on you being an ultra runner, but they will be like: ‘oh I thought ultra runners were slow’ and it’s nice to be like: ‘well, running is running’, it doesn’t really matter what pace you run for 100km, if you can mix it in there, that’s great.”

Lockdown has seen Evans take on more cross training than normal as he looks to keep things “ticking over”.

“It is more bringing it back down to basics and not taking any unnecessary risks,” he explains. “On a personal level, it’s just not worth it, and then on a national level – a lot of the places that I’ll run, you’ll think afterwards: ‘oh that was probably a little bit risky’ and at the moment it’s just not worth it. If you were to go over on your ankle in places and you need support and treatment, firstly you can’t get it and secondly, I wouldn’t want to get it and you wouldn’t want to be a burden on the NHS or anything.

“It has been reducing the risk, peeling back the training and instead of training at 95-100%, training at 90-95% and just really enjoying it.”

Evans admits that something slightly less enjoyable was his Three Peaks Challenge, although it proved to be a very valuable experience.

Not wanting the training and research he had done prior to lockdown to go to waste, he started plotting a treadmill version of the feat.

For Ben Nevis, that meant 7.82km at 13.5% incline for the ascent, while Scafell Pike required 4.5km at 20% incline. The Snowdon section saw him take on 5.5km at 13.5% incline and the descents for each involved the same distances at 0%. 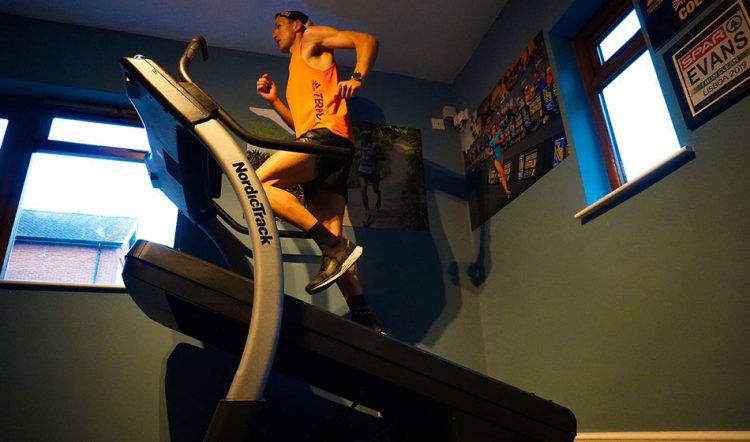 “I had worked out the distance and the average gradient of the three climbs and programmed them manually into the treadmill,” Evans explains. “I did a bit of a live stream and basically I wanted to show people that, yes, goals and plans and things will have changed this year but actually you’ve got to make the most of the situation and if that means you’ve got to think slightly outside the box, then brilliant.

“So many people have done so many amazing things, doing marathons in their back gardens and climbing Everest on their stairs, which is incredible. For me, it was a performance thing. It was trying to replicate race day so I didn’t forget how things felt.

“A lot of people have asked whether I think it was physically more or less difficult (than doing the real thing),” he adds. “Less difficult because you’re running on a lovely flat surface on a treadmill and it could be a little bit cooler and you’re not running at night at all and it’s pretty controllable but then actually, there’s about 200 miles of driving between each of the mountains. If you’re driving yourself then yes it’s pretty hard, but actually if you’ve got a campervan and you’re lying down in the back then you’ve probably got three hours of rest in between each one where you can get some good food and nutrition and get ready for the next stage.

“I went from one to the next one straight away so physically it was tough but mentally was the really challenging thing. Normally, when I am trail running and I’m in the mountains, when things get tough I’ll implement different measures to stay motivated and stay focused. That could be trying to distract myself and look around and see the beautiful scenery. But when you’re on the treadmill, there’s not too much to look at. My speakers also cut out so I ended up not having music for three-and-a-half hours of it so that was pretty miserable.”

Evans opted for a minimalist nutritional approach. “I had 60g of carbohydrate and 80mg of caffeine for four-and-half hours and that was it,” he explains.

“It was really interesting seeing what happened during the challenge. During it, it didn’t affect me too much. Yes, by the end I was pretty hungry and that’s where the caffeine really kicks in. For me, having that Red Bull, it gives you that sugar boost but it also gives you that caffeine boost so you have that energy, focus, motivation and determination to keep going.

“For me I found the recovery was much slower just because my body was on empty by the end of it.”

With marathons in mind, there were lessons learned that he can take with him on to the road.

“It was interesting. Wouldn’t recommend it, not very fun, but a good test,” says Evans.

“I wanted to go in with a minimal fuelling strategy. It’s kind of the same with running a marathon – if you miss an aid station or you miss water or your gel then you’ve kind of got to deal with it.

“I wanted to see what my body and my mind would do on a minimalist strategy during the run itself.”

As he begins the next chapter of his running journey, it remains to be seen what else Evans’ mind and body are capable of.