Sasha Zhoya: “I want to be one of the greatest of all-time in the hurdles” 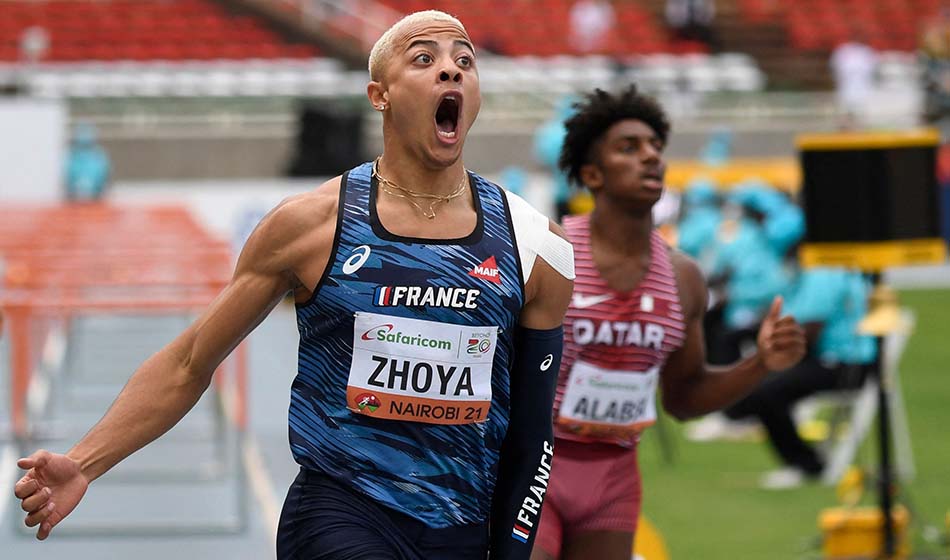 World U20 110m and 60m hurdles record-holder on idolising Usain Bolt, his background in contemporary dance and ballet and ambitions to be one of the great sprint hurdlers

Last month Sasha Zhoya set a world junior record in the 110m hurdles (99cm) with 12.72 to win gold at the World Under-20 Championships in Nairobi, Kenya.

During the championships, the 19-year-old Frenchman bettered Wilhem Belocian’s seven-year-old world under-20 record of 12.99 in both the semi-finals and the final, going sub-13 for the first time in his career.

He now holds four out of the top seven times – including the top two – on the all-time list and hasn’t just won but cantered to race victories.

If you hadn’t heard of Zhoya, you may have now. 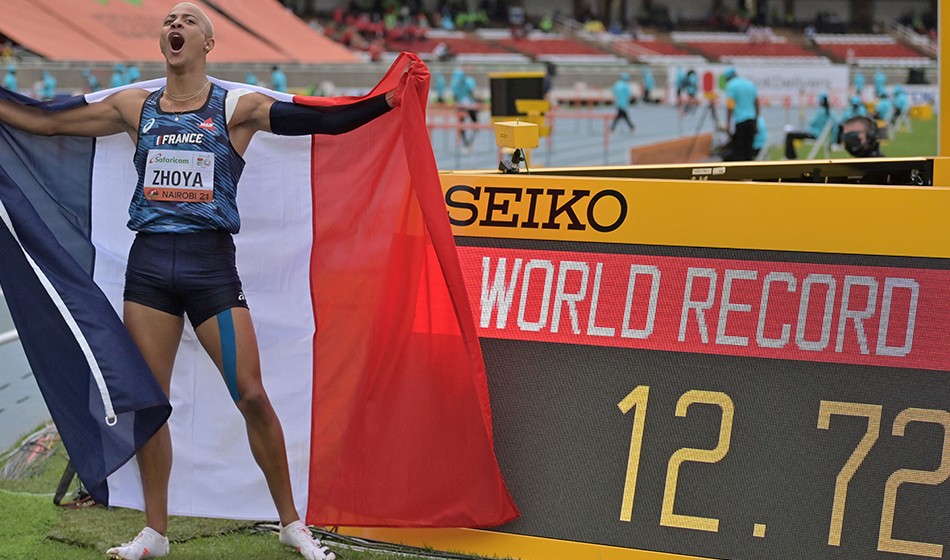 “I wasn’t expecting a time [12.72] like that,” he tells AW. “I thought I could go quicker than my semi-final but on the day of the final I had a lot of pain in my hip flexors to the point where I couldn’t even get my trail leg around.

“On the track I couldn’t even do two hurdles so I wasn’t feeling my best form before the start. During my race I had the Jamaican [Vashaun Vascianna] on my right and I could feel his presence so I knew I had to run fast, body pain or no body pain, I had to get this medal.”

His 12.72 is actually quicker than the 110m hurdles world record of 12.80, which was set by Aries Merritt in 2012, but junior hurdles are seven centimetres smaller than the senior ones (99cm to 106cm). So what can Zhoya do at senior level?

“For now, I’m happy with what I’ve done but we’ve seen a lot of people who have done well in the junior ranks who haven’t made it to the next level,” Zhoya says. “If I can put my name in the senior books and do well at a major championships then I can look back on what I did as a junior in the regard that was progression to my full career.

“I’ve engraved the stone but I want more and I want to be one of the greatest of all-time in the hurdles. I had the big dog Grant Holloway message me and I was absolutely stoked about that and he’ll probably break the world record. That was dope but then the messages from fans were cool, having that following behind you.”

Zhoya was born in Perth, Australia, to a French mother and a Zimbabwean father meaning he has a triple nationality. His mother, Catherine, was a former international skier and father, Yonah, a musician, with both sports and performing arts an instrumental part of the hurdler’s childhood. Most of the upbringing he had was down to his mother with his father based in Africa.

Growing up, he had the flexibility to choose what nationality he wanted to represent at international level. He chose France.

“It was a very hard decision,” Zhoya says. I was born and raised in Australia and there was a huge part of me that I know is very Australian but I was raised by a French mother and a lot of me was culturally a French person. The decision was made about two years ago and it was complex. I wanted to represent myself and my family and the easiest way to do that was to represent my mum because she was more forward in raising me.

“The other thing is because the European season is probably the biggest thing in track and field. Every athlete comes to the European circuit and the Diamond Leagues and being based in Paris allows me to do the competitions I want to do.

“Plus Paris 2024 is a home Games and not many athletes can say that! Just because I represent France though doesn’t me I feel any less Australian or Zimbabwean.”

From a young age Zhoya was given independence. By the age of three he could swim while bike riding, surfing, tennis, basketball and kung fu were commonplace around Perth. When he was eight, the hurdler joined Melville Little Athletics, where his mother was a coach.

Zhoya credits the move to track and field to his older sister Manashe. It’s no surprise to hear that they had a pretty big sibling rivalry.

“We had a household which was very sports focused,” he smiles. “We could do our schoolwork and as long as that was done I could have as much fun on the field. There’s always that clash between siblings but being sport driven we had competition for absolutely everything.

“It was hard as I was the younger brother so she would win a lot of the time but I remember doing a triple jump and I was more hyped I broke my sister’s record than getting a medal. I was a very hyper active kid so sports was the pathway for me to choose. My sister bringing me to my first meet was when I fell in love with track and field and I was lucky to have parents supporting me whatever I wanted to get into.” 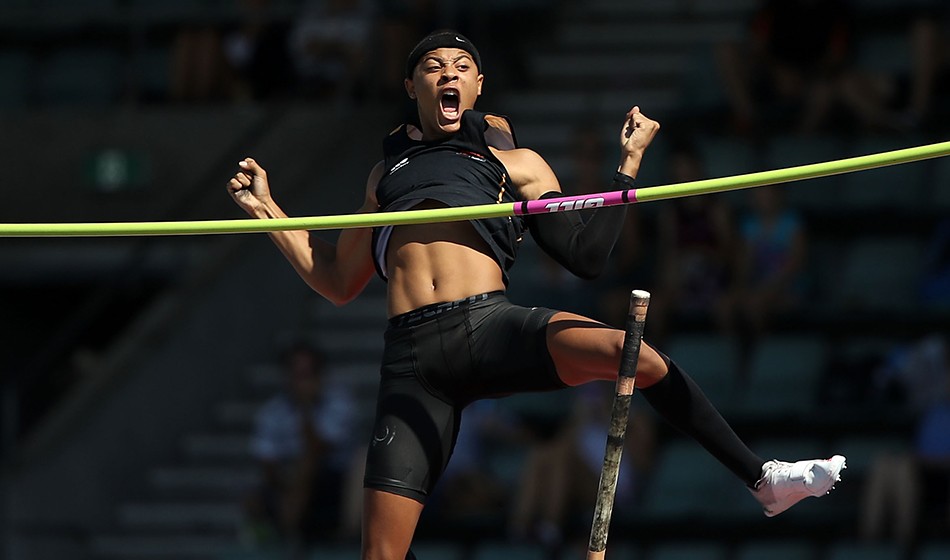 When he was 14, Zhoya joined the Australian Institute of Sport and took a love for the sprint events but also competed in the pole vault and actually has a personal best of 5.56m, which was a world under-18 best.

Performing arts is also a passion. Up until last year the 19-year-old had been studying for a diploma in contemporary dance and ballet but the time that he was spending in athletics, added to the travel between France and Australia, meant that, for now, he’s continuing it as a hobby.

“I think the arts taught me that being on a stage is quite confronting as they are 100% on you,” Zhoya explains. “Growing up in that background, I feel like it just taught me to be myself, natural and to feel comfortable when there’s an audience watching you. I feel like I do better when there are more people as they are there to see you perform and race and it just gives me a vibe.

“I was at a performing arts high school so I did five years at the college of ballet and contemporary dance and then I went to university where I studied ballet. Unfortunately, with the amount of travel I do now I had to stop that last year but I’m looking at something very similar to continue up in Paris.”

A background in performing arts has helped Zhoya have the confidence to express himself and be authentic on a global stage, just like his idol Usain Bolt. During his childhood he recalls how he only had one poster on his bedroom wall and that was a newspaper cutout of Usain Bolt. 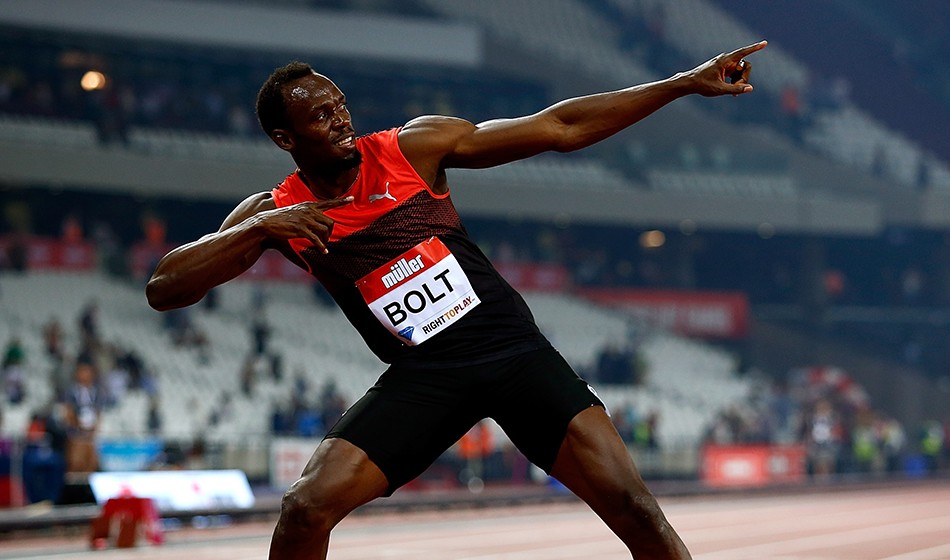 Usain Bolt at the 2016 Diamond League in London (Getty)

“I was at the 2016 Diamond League in London,” Zhoya tells AW. “Bolt being Bolt, everyone was screaming his name and there was a group of Jamaicans to my right and he would occasionally look up to them as they speak the same language.

“So I threw something out there, and the only thing I knew how to say was wagwan, and he looked up straight at me and I was thinking ‘oh shit’. I didn’t have any other words to say as I was in shock and it’s what one of the best moments of my life so far.”

Like Bolt, Zhoya is eager to show what life is like off the track. He has a Youtube channel and last year posted a vlog of himself competing. It got over 44,000 views. The kid who tried pretty much everything growing up has now found a career which could potentially see him as the face of the Paris 2024 Olympics, depending on how his senior career progresses.

With both the European and World Championships taking place in 2022, a move to senior level provides an instant opportunity to not just mix it but deliver major championship medals among the big boys. Zhoya, however, is still grounded.

“I think the first couple of meets will be a shock to me,” the 19-year-old says. “I’ll be thinking ‘damn, two years ago I was watching you on the TV and now I’m next to you’ so that’s going to be a bit of a challenge to stay focused and run my own race. But it’s a step that everyone’s made and I’m looking forward to the higher hurdles and it’s a game on.

“I’m going to be the underdog because I am the young one but age doesn’t mean a thing when you’re in the senior ranks.”