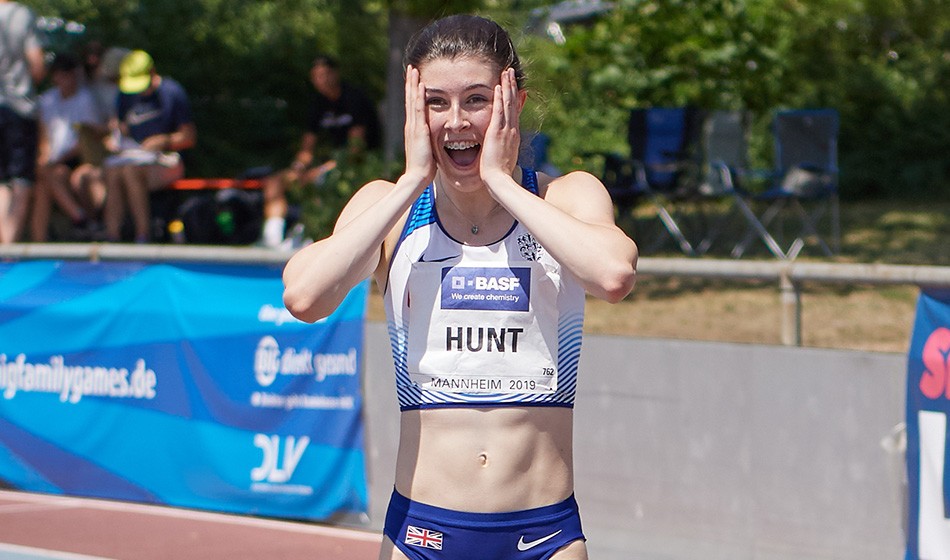 One of Amy Hunt’s main memories of a year she describes as having been “beyond my wildest dreams” is her feet feeling on fire as she blazed to a world under-18 200m record of 22.42.

It was quite some summer for the 17-year-old as after her record-breaking run in Mannheim she went on to win double gold at the European Athletics Under-20 Championships in Borås, claiming the 200m title as well as securing 4x100m success.

Her year came to a close with further victories as she was voted British female under-20 athlete of the year in the AW Readers’ Choice Awards as well as winner of the Lillian Board Memorial Award for junior female by the British Athletics Writers’ Association in London. She then swapped the pages of AW for Vogue as she was included in the fashion and lifestyle magazine’s ‘Bright Young Things’ feature, something the teenager described as “an incredibly surreal experience”.

thank you so much @BritishVogue for including me in your jan 2020 issue in the ‘Bright Young Things’ feature. an incredibly surreal experience ✨

“It has been beyond my wildest dreams, really. I never would have expected to have such an incredible year,” says the Charnwood sprinter. “It’s a massive testament to all the people who work so hard around me and work so hard behind the scenes in making me the person and the athlete that I am.

“It has been entirely unbelievable. I still really haven’t quite processed it yet. It is really still sinking in. Not even just the time, but European Juniors – I never expected to have double gold there at my age, at 17. Looking forward to next year is really exciting.”

Reflecting on her record at the Mannheim Junior Gala, which was a PB by three-quarters of a second, Hunt adds: “It was like 40 degrees out there and my overriding memory from the race is ‘oh my gosh, my feet are absolutely burning up’.

“I crossed the line and I really expected to see something like 22.9 and if I had done really well maybe a 22.8, I might have just snuck in there. Then I saw 22.4 and I just couldn’t believe it. It’s so hard to sum up. It was a huge, massive shock.”

Not only did her time improve on Candace Hill’s world under-18 best of 22.43, it also beat Dina Asher-Smith’s British under-20 record of 22.61 and matched the mark that European champion Asher-Smith ran on the same day at the Prefontaine Classic in America.

“I didn’t even quite realise the implications and how good that time actually was until afterwards and everyone was saying ‘by the way, it’s actually a world record’,” says Hunt, who is coached by Loughborough-based Joe McDonnell.

“I hadn’t even been looking at that. I didn’t even know I had broken Dina’s British junior record because I hadn’t been thinking I was going to do anything like that. I had no goals in mind, I had no idea.”

Asher-Smith went on to improve her own British senior record with 21.88 when winning world gold in Doha, with Hunt ending the year ranked second on the UK senior list behind the 24-year-old.

“That’s insane,” she says. “Dina is such a massive inspiration to me and women’s sprinting at the moment in Britain is in such a good place.

“To be second on those rankings, it’s really insane to me, because there are so many amazing girls doing really well at the moment. To be up there with them is really great.”

Hunt has another two years of racing as an under-20 athlete and her focus in 2020 will be the World Athletics Under-20 Championships in Nairobi, while she intends to take everything else in her speedy stride.

“We’re just going to see what happens,” says the English literature, chemistry and music A-level student, who plays the cello to grade 7 standard and had performed in two concerts during the week of our interview. “There are a lot of different variables next year.

“I’ve got my exams. World Juniors is probably my major competition I’m going to focus on because I only get one chance to do it and it’s going to be in Kenya so a new experience for everyone involved. That’s my No.1 priority.

“Next year I’m definitely looking to run some really fast 100m races,” she adds. “Up until my 200m at Mannheim I was doing mostly 100m and then I became the 200m girl after one race! My PB going into this year, because I hadn’t done it much, was like 24.3, so I nearly took a whole two seconds off my PB in one year!