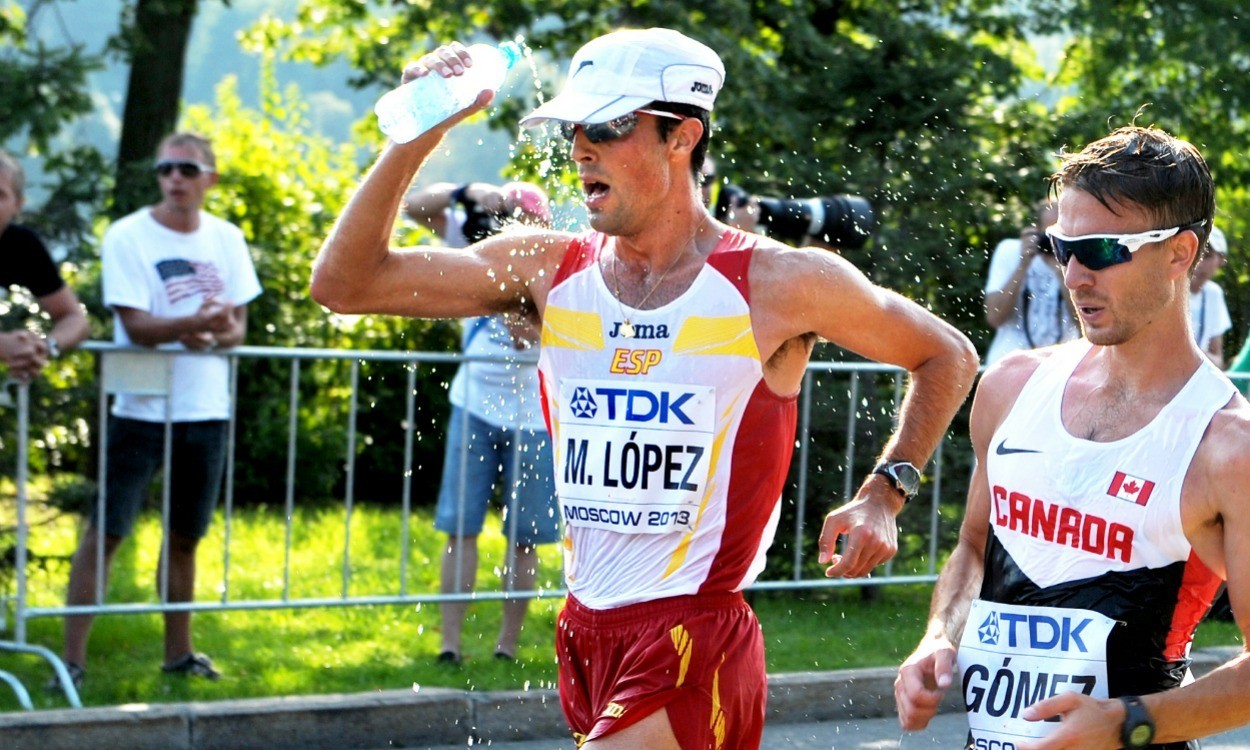 Spain’s Miguel Ángel López became the third gold medallist of the European Championships in Zurich after the closest ever finish in the history of the 20km race walk at these championships.

Just two seconds separated the top four, with López – pictured above at the slightly warmer World Championships in 2013 where he claimed bronze – clocking 1:19:44 to take the title ahead of Russians Aleksandr Ivanov and Denis Strelkov who crossed the line in 1:19:45 and 1:19:46 respectively, both personal best times. Ruslan Dmytrenko of Ukraine followed in fourth with 1:19:46.

In wet conditions, López’s final surge proved vital as he won by just a second for the smallest margin of victory at the European Champs to add the senior title to his European under-23 one from 2009.

“To become the European champion, that is very important achievement for me and it boosts my self-confidence. Before the competition my plan was to fight for the medals but only in the last kilometres did I start to feel that the victory was possible,” said López, adding how his plan is to focus on this distance up to the 2016 Olympic Games in Rio before turning his attention to the 50km event.

With 1:23:17, Britain’s Tom Bosworth clocked his third quickest ever time for 12th to secure the best result by a British male at the European Championships in 32 years.

“Today was great, support was awesome and I’m pleased but I won’t be fully happy till I’m first in Europe,” the 24-year-old tweeted. “Stepping stone, plenty more to come!”

Over on the track and all three British athletes in both the women’s 800m heats and men’s 110m hurdles heats safely progressed, while their team-mate Eilidh Child won her race in the first round of the 400m hurdles.

Alison Leonard went quickest in the two-lap event, her 2:01.47 marginally faster than Lynsey Sharp’s 2:01.55 to win a later heat. Jessica Judd also booked her semi-final spot with 2:02.30 for third in her race.

French record-holder Pascal Martinot-Lagarde, British champion Will Sharman and Russia’s defending champion Sergey Shubenkov all ran the equal fastest time in the first round of the 110m hurdles with 13.29, as Sharman’s fellow Britons Lawrence Clarke and Andy Turner join him in the semi finals. Clarke grabbed one of the automatic qualifying spots while Turner, who had earlier confirmed that he will be retiring at the end of this season, secured a spot as a fastest loser.

Britain’s Chris Baker cleared 2.23m in the wet conditions to secure his spot in the high jump final alongside the likes of Ukraine’s world champion Bohdan Bondarenko and Russia’s Olympic champion Ivan Ukhov. Hammer favourites Betty Heidler of Germany and Poland’s Anita Wlodarczyk were among those to progress, though a best of 62.93m wasn’t enough to see Britain’s Sophie Hitchon through to the final.

In the decathlon, Germany’s Arthur Abele, who had sat top after three events but then slipped to third at the end of the first day, moved up one place after six events following a championship best performance in the 110m hurdles. His 13.55 was the quickest any athlete has clocked for this event as a part of the decathlon at the European Championships and claimed him 1033 points.

His team-mate Kai Kazmirek still led the rankings at that stage though with 5460 points to Abele’s 5343, while 2008 Olympic silver medallist Andrei Krauchanka of Belarus was just behind with 5312.

A best of 43.25m in the discus wasn’t enough to keep Abele in the top three, though, and he slipped to fifth, Krauchanka moving to second and the third German athlete Rico Freimuth, who won the discus with 48.81m, taking the third place position after seven events. With 5511 points at that stage Britain’s Ashley Bryant, who won Commonwealth silver just two weeks ago, sat 20th but was later one of four athletes to fail to start the pole vault competition.