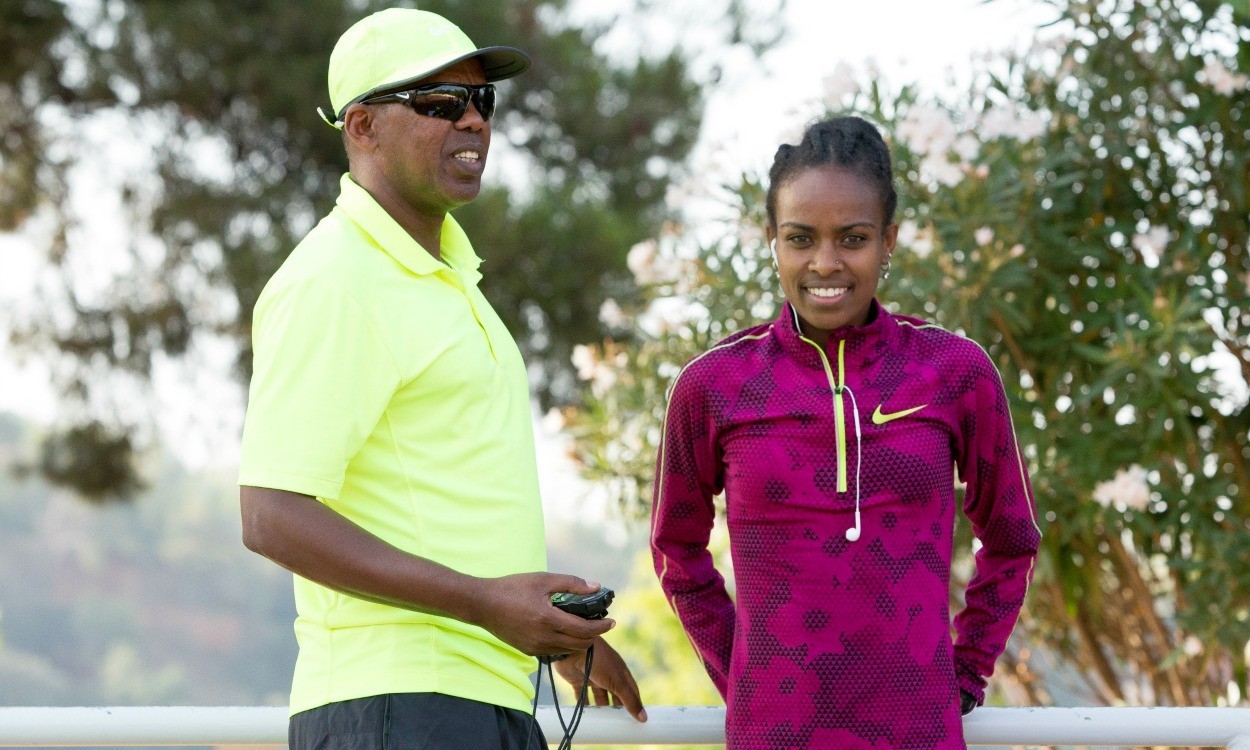 With Genzebe Dibaba clocking an astonishing 1500m world record of 3:50.07 last year, her coach, Jama Aden, tells Cathal Dennehy how she did it and claims the Ethiopian can run far quicker

Much has been written about Genzebe Dibaba’s historic season in 2015, but less is known about the man who masterminded the Ethiopian’s journey into the record books, coach Jama Aden.

A former elite miler from Somalia, the 53-year-old Aden has been the world’s most successful middle-distance coach in recent years, having coached Dibaba, Taoufik Makhloufi, Ayanleh Souleiman and Abubaker Kaki to championship success.

Before taking up a coaching position in Qatar in 2010, Aden was based in Sheffield for 17 years, coaching local 800m athlete Mukhtar Mohammed, among others. Aden was also joint-coach to Abdi Bile, the Somalian miler who was a long-time rival to many of Britain’s best and who took 1500m gold at the 1987 World Championships in Rome.

However, it is his association with Dibaba for which he has become renowned. “I don’t have words to express his contribution in my running career,” Dibaba said in Beijing when Athletics Weekly asked about Aden. “He has such a big impact. I broke five world records since working with him.”

“I don’t have words to express his contribution in my running career. He has such a big impact. I broke five world records since working with him” – Dibaba on Aden

In a discussion which offers an unprecedented insight into her performances, Aden speaks to Cathal Dennehy about how he transformed Dibaba’s training, why he believes she can run 3:47 for 1500m, and why he thinks doping accusations levelled at her are borne out of jealousy.

The below is just a taster of what Aden had to say. To read the full six-page interview, check out the January 28 edition of Athletics Weekly magazine, which is also available to download digitally here.

When did you begin working with Genzebe Dibaba?

It was in 2012. Her sister, Tirunesh, told me they were looking for a coach for her. Genzebe won the World Indoor Championships before, but outdoors she hadn’t done much, so I said let me study how she races and trains. In October 2012 we met, and we started [working together] in November.

How did you amend her training in that first year?

It was very hard to explain to her at the start, so I used a translator. Now she speaks good English but she is very shy. I was trying to see what works, but now I’ve found out she needs the mileage – to keep slim and also because she has natural speed, so I don’t think she needs any coach to give her a lot of speed.

What was the recovery?

People often say when an athlete breaks a world record they must be doping; can people have faith that Genzebe is a clean athlete?

I’m sure a lot of people question it, because the record she broke was by the Chinese, and everybody says they were doing this or that; everybody can have their opinion, but many people say to me “this girl must be on something”, but I say come and watch. I say she works hard and people then say: ‘how can she recover?’ but the first year she was doing three track sessions very hard each week and she couldn’t recover, so this year I come up with a new idea and we changed things.

We’re learning each year, but people can say what they want and people in track and field will listen to the stories. It’s sad. One athlete will act like he’s the only clean guy in the world, one coach will say he’s the only clean coach and killing the others he’s supposed to be helping.

When people have success and you attack them, I don’t think it’s fair. If they say 3:50 is hard, well, she can go faster, so they can say again what they want to say. I 100% believe she can go a lot faster.

Do you believe it’s still possible to break world records as a clean athlete?

» For more from this interview with Jama Aden, check out the January 28 edition of Athletics Weekly magazine, which is also available to download digitally here. Make sure you never miss an issue of AW again by taking out a subscription – print subscriptions can be ordered here, while digital subscriptions are available here