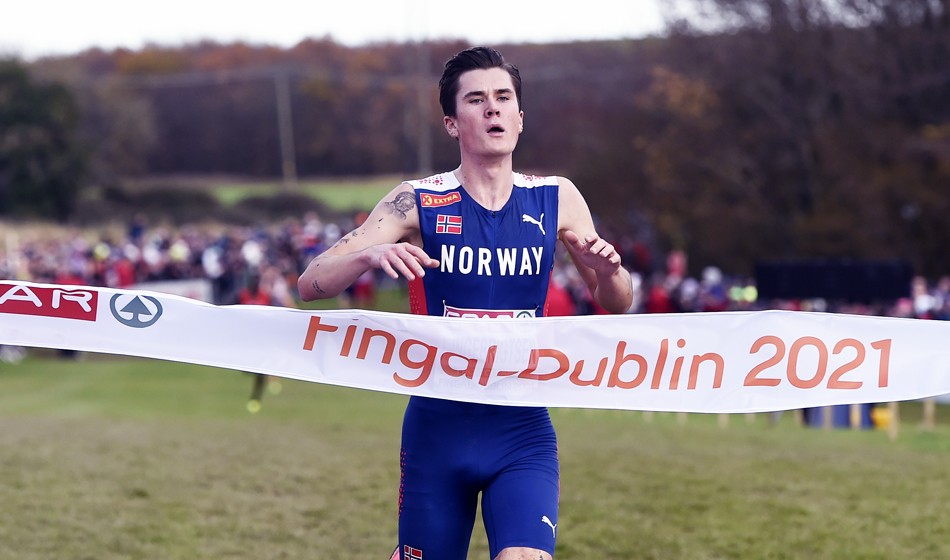 For athletics fans the European Cross Country Championships always represents a pre-Christmas highlight but there was a real festive treat hiding behind the 12th day of the advent calendar this year.

The 27th edition of this showpiece proved to be one of the very best in its history as the superb venue at the Sport Ireland Campus on the outskirts of Dublin, the sizeable crowds and the top class racing on show all combined to produce a day to remember.

Norway took the individual honours in the final two events on the schedule – the senior men’s and women’s races – thanks to Olympic 1500m champion Jakob Ingebrigtsen and Karoline Bjerkeli Grøvdal, but it was Great Britain who finished top of the medals table after striking gold five times. There were champions to celebrate in the form of Megan Keith and Charles Hicks, while the men’s under-20, senior women and mixed relay line-ups all finished first, too.

Jakob Ingebrigtsen says not much has changed since he won 1500m gold in Tokyo this summer. “I’ve always felt like an Olympic champion,” smiled the Norwegian superstar, and there was a familiar outcome for him when it comes to the Euro Cross as he won his fifth consecutive title by claiming senior men’s gold.

The 21-year-old won four under-20 golds from 2016-2019 and, following last year’s postponement of the championships, moved up to the senior ranks as he bypassed the under-23 category completely.

As has become tradition, he produced another command performance and had the rest of the field playing to his tune.

Ingebrigtsen doesn’t so much demolish his opponents as grind them into submission. For someone who runs so quickly, there is nothing rushed about him and he was content to bid his time before working up towards a lead group which contained defending champion Aras Kaya of Turkey, Frenchman Jimmy Gressier and Italian Yeman Crippa.

With Crippa stepping off due to what looked like a stitch and Gressier unable to keep pace, it came down to a duel between Ingebrigtsen and Kaya, with the pair going toe to toe as they entered the final 1500m lap.

It was the younger athlete who simply glided away over the increasingly sticky turf, though, as he covered the 10,000m course in 30:15, enjoying a winning margin of 14 seconds. The 2019 under-23 champion Gressier hung on for third in 30:34.

Liverpool trials winner Jack Rowe was the first Briton over the line, in 18th, closely followed by Andy Butchart and Jamie Crowe in 23rd and 24th respectively. There would be no team prize for the 2019 champions, as France took gold, Spain silver and Norway bronze.

“It felt really good, but I have to admit 10km is not the best distance for me,” said Ingebrigtsen, who completed a year in which he also took European Indoor gold over 1500m and 3000m. “At the same time we do a lot similar training to these sort of races, but you are always thinking worst case scenario. There is a lot of mud here, it is a tough race, a long race with a lot of good competitors this year. I felt like I ran with a pretty good feeling throughout. The crowd was crazy and they really helped us.”

There was a similarly impressive performance from Karoline Bjerkeli Grøvdal, who had been locked in battle for much of the race with German Konstanze Klosterhalfen and Sweden’s Meraf Bahta. However, she saw off her foes impressively and took European Cross gold for the second time in her career, having won the under-20 race the last time Dublin staged these championships 12 years ago.

Grøvdal won by 10 seconds from Bahta over the 8000m race in 26:34, while German Alina Reh moved through for bronze and Jess Judd just missed out on an individual medal but led the British team to gold with fourth place in 27:01.

“I have won so many bronze and silver medals at European level – both on the track and in cross country – so for me to take the gold today means a lot,” said the 31-year-old Grøvdal. “I am so happy for having been able to do that. It was a really tough and strong field, with so many good athletes on the starting line, so it is extra special to win gold. It was not only until the last lap that I realised that I would be able to take the win. Dublin has been good to me.” 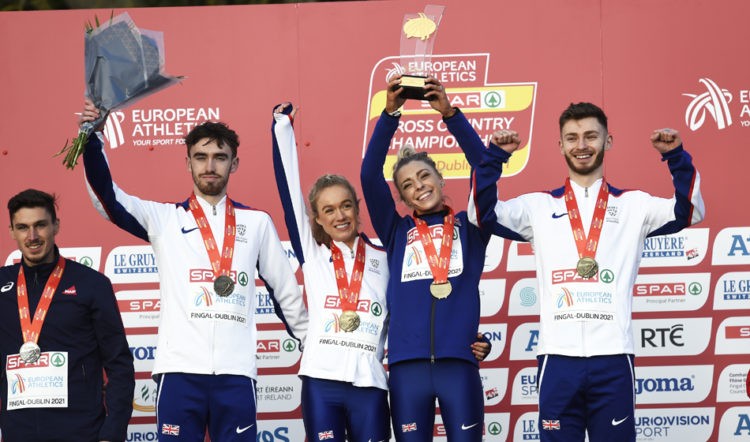 Since the event’s introduction into the programme in 2017, Great Britain have won all but one of the mixed 4x1500m relay contests at the European Cross Country Championships. Alex Bell has been on the team for three of those races and it was here where she made a stunning impact.

The plan had been for Hannah Nuttall on leg one and Luke Duffy on leg two to keep the team in contention before Olympic 800m finalist Bell would “do some damage” and that is exactly how the race played out.

Duffy handed over to Bell in seventh place but, by the time of the final handover, she had flown to the front and placed Ben West at the head of affairs. He got the job done as the team clocked 18:01 to win by four seconds from France, with Belgium a close third.

“I am so happy for this team, to win gold is a great achievement for this young squad,’ said Bell. “Everyone played their part in making this happen today so I’m very proud of them.” 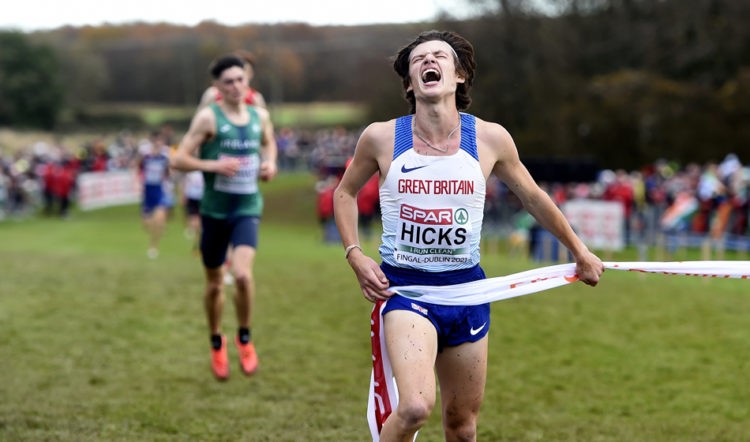 Hicks hunts down gold as Battocletti scores a hat-trick

When Charles Hicks last raced at the European Cross Country Championships, his fifth-place finish led Britain to team gold in the under-20 event two years ago. Much has happened in the interim for the US-based athlete, however, and his impressive 2021 continued as he managed to roll with the punches to win individual gold in the men’s under-23 race.

The Stanford University student, Britain’s fastest ever teenager over 10,000m, was second at last month’s NCAA Div 1 West Regionals cross country and had appeared to be control as he moved ahead of home favourite Darragh McElhinney at the halfway mark of the 8000m contest.

The Irishman fought back, however, and the two were locked in battle entering the final lap. Again, Hicks looked the likely winner but an injection of pace from Luxembourg’s Ruben Querinjean changed everything and it became a flat out charge for the line.

The Briton held his nerve, however, and ultimately there first in 24:29, four seconds ahead of McElhinney, while Querinjean was a further three seconds back.

Ireland were still able to celebrate team gold, however, while Britain took silver and France bronze.

“It is an unbelievable feeling,” said Hicks. “I am beyond amazed. I’m incredibly proud of myself, my coaches and my team-mates, and my team-mates in Stanford. We’ve put a lot of work in the last couple of years to get here.

“It was such a hard-fought race and I think that contributes to this amazing feeling. There wasn’t a single metre there where I wasn’t fighting. To win means the world to me.” 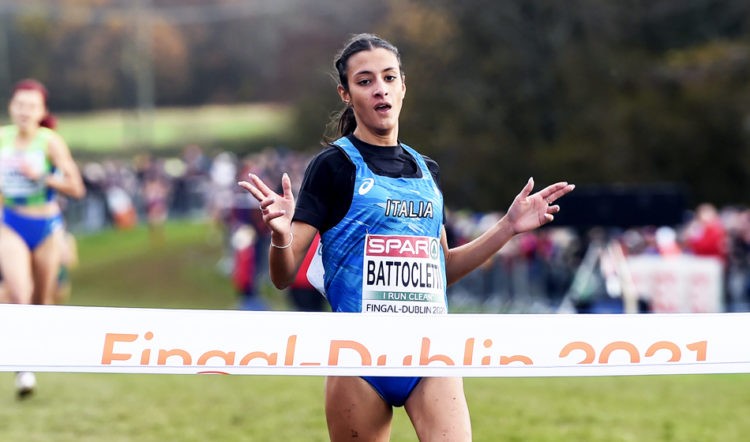 In the women’s under-23 race, Italian Nadia Battocletti won her third successive European Cross gold, following up her under-20 wins in 2018 and 2019 with another victory.

Britain’s Amelia Quirk made the early running before she was joined by Slovenia’s Klara Lukan, with Ireland’s Sarah Healy also in the mix. However, Frenchwoman Manon Trapp hit the front at the bell before Battocletti moved up from fourth and into a lead she would not relinquish.

Italy’s European under-23 5000m champion held off Lukan and the fast-finishing Portuguese Mariana Machado to win the 6000m race by four seconds in 20:32.

It gave Italy team gold ahead of France, while Britain took team bronze after a ninth place finish for Izzy Fry, with Quirk 12th and Cari Hughes 16th. 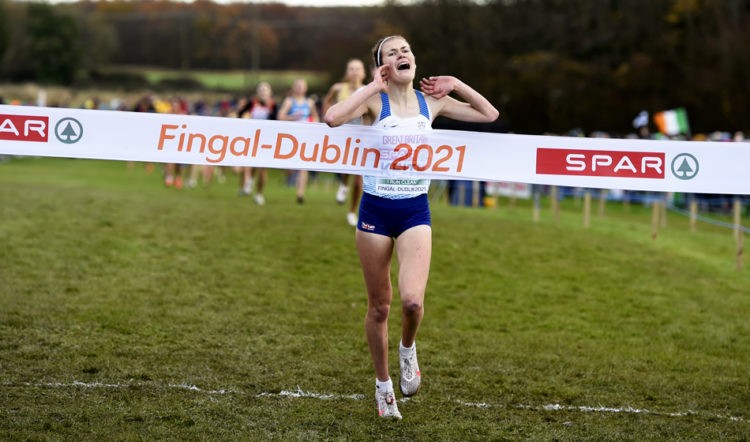 There is much excitement building around the potential of Megan Keith and you could understand why after the brilliant performance which brought her women’s under-20 gold in Dublin.

After the lead kept changing hands between the Briton and German Emma Heckel, an uphill charge on the final lap from Keith proved decisive and the Liverpool trials winner held on to first place, coming home over the 4000m course in 13:41 to win by three seconds from Norway’s Ingeborg Østgård. Heckel had to settle for third place in 13:46.

“I feel incredible – I am in shock,” said Keith, who was third in the British Junior Athlete of the Year category in the 2021 AW Readers’ Choice Awards. “I don’t know what has just happened. I am really happy.

“I am from Scotland, so I am used to with the hills. I knew this would play in my favour, so I tried to capitalise on that. My crazy dream was to be on a path that I might be in the mix for a medal, but didn’t think I could win the whole thing. It is mental!”

“It was amazing when I crossed the line. I don’t think I’ve ever run so quickly to a finish line in my life. Now was the time to do it!”

Jakob Ingebrigtsen had enjoyed a monopoly over the men’s under-20 event, but with the Norwegian moving into the senior ranks there was the opportunity for a new champion to be crowned.

Given the nature of the performance he produced, plus the fact he is just 17, this year’s champion Axel Vang Christensen suggested there could be another dominant force emerging among the junior ranks.

The Dane, silver medallist in the 3000m steeplechase at the European Under-20 Championships this year, led from start to finish and spent the duration of the race building the size of his lead, coming home in 17:53, with a 25-second winning margin over Norway’s Abdullahi Dahir Rabi over the 6000m course. Denmark’s Joel Ibler Lillesø won bronze, a further three seconds back in 18:21.

Will Barnicoat (ninth), Hamish Armitt (tenth) and Henry McLuckie (15th) secured the team gold for Britain ahead of Ireland and Israel.