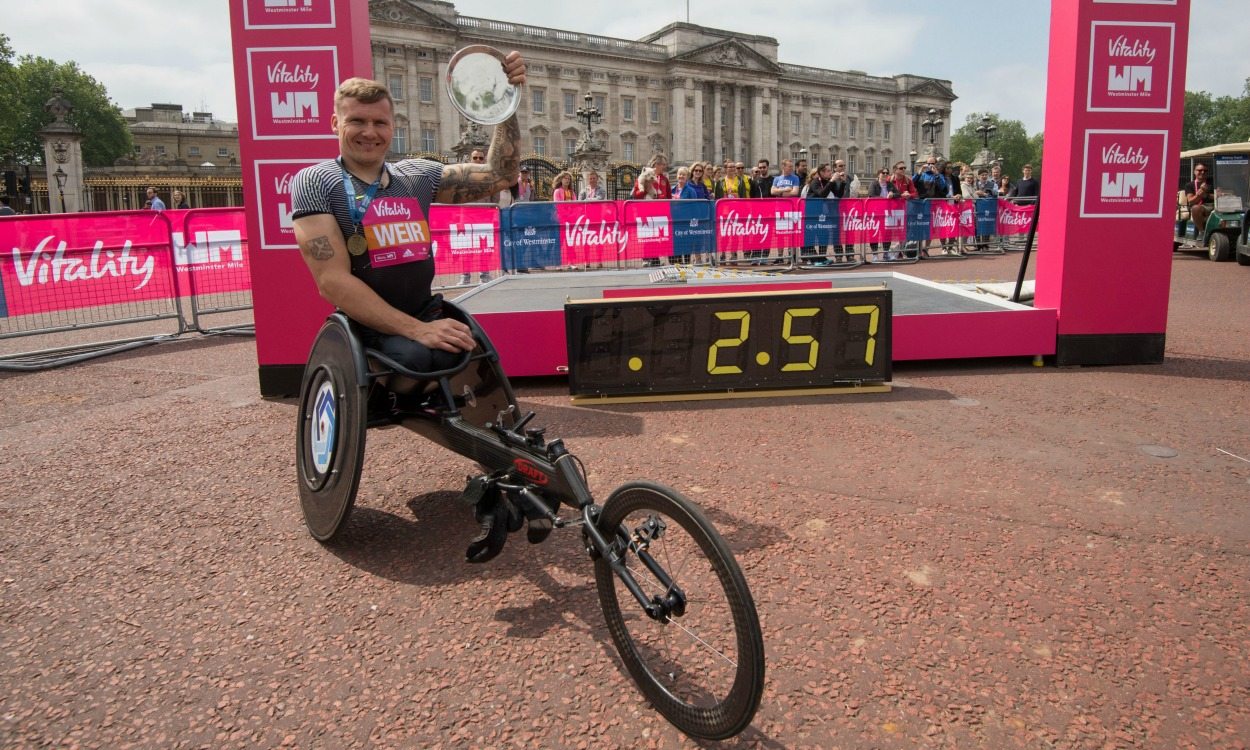 David Weir has made history by becoming the first wheelchair racer to complete a mile in under three minutes.

The six-time London Marathon winner enjoyed warm weather and dry roads as he flew around the Vitality Westminster Mile course that skirts St James’s Park in the heart of Westminster to cross the finish line in front of Buckingham Palace, clocking 2:57 to smash his former world best time of 3:03.

“I’ve always said I could do it,” said Weir, who described his victory over South African rival Ernst van Dyk as a “perfect race”.

“I knew it was possible and training has gone really well,” continued Weir, who passed halfway in 1:28. “The team behind me have been telling me to get it right. I knew I had to get off to a quick start and that Ernst would chase hard. I knew from last year that my start let me down.

“I was more relaxed down Birdcage Walk, but I was still pushing at 22 miles an hour and that’s not bad,” he added.

The British Championship men’s mile was a thrilling race. In-form 5000m runner Andrew Butchart kicked clear 400m out and looked the likely winner. However, Nick Goolab caught him on the line. Many thought the Scot had held on but the judges decided that Goolab had edged it with both given a course record 4:01.

Tom Marshall was a close third in 4:02 with Olympic steeplechase prospect Rob Mullett showing good speed with 4:03 in third.

The women’s race was more straightforward and Sarah McDonald’s strong second half gave her a clear win in 4:38. Josephine Moultrie and Adelle Tracey, who had won over 800m the previous night in Watford, shared a time of 4:40 in second and third.

The under-20 races weren’t as well supported and they were won by Scott Halsted in 4:16 and Holly Parker in 5:03, while the under-20 wheelchair races were won by Craig Boardman in 4:13 and Jessica Fletcher in 6:48.