Asbel Kiprop among winners at the Great North CityGames 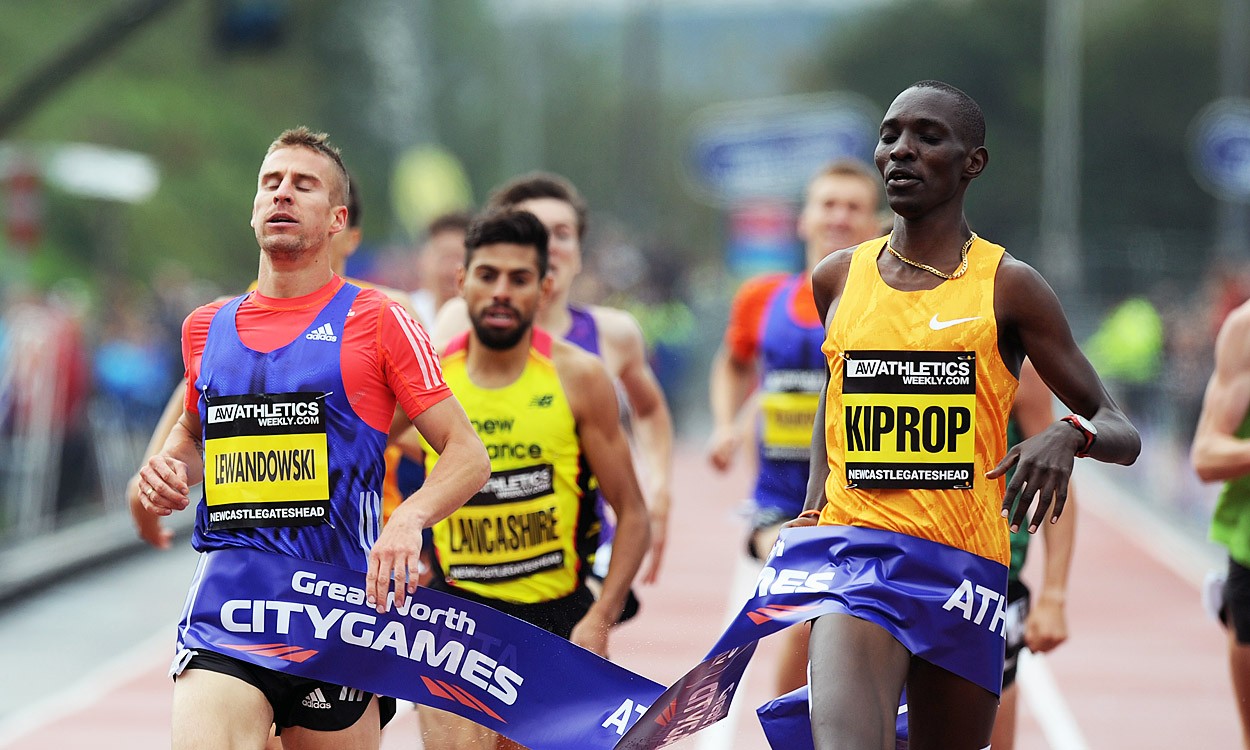 Asbel Kiprop was among the athletes following up their World Championships successes by ending their seasons at the Great North CityGames, held in wet conditions around the Newcastle-Gateshead quayside on Saturday.

On the day that the meeting’s organisers announced plans for a Great World CityGames international tour, the meeting proved to be a great showcase for the street athletics concept which new IAAF president Seb Coe has said should play a bigger part in the future of the sport.

Kiprop does not have the best record in Great Run events – particularly in the Great CityGames,  but the world champion did just enough to win here.

The 2008 Olympic 1500m champion and clear world No.1 for the distance was content as usual to let others take the pace and looked relaxed as Britain’s Tom Lancashire and Poland’s Marcin Lewandowski led him for most of the finishing straight. That followed a fifth and second respectively for Kiprop in the past two years in this event. But as Lancashire dropped back to third, Kiprop took the race with a dip finish in 4:07.73.

Lancashire clocked 4:08.52 as he followed up a good fourth in Brussels on Friday night to continue his good late-season form.

World championship finalist Mike Rodgers won the 100m comfortably in 10.11 into a slight headwind of 0.2m/sec, the American finishing twelve hundredths in front of Britain’s CJ Ujah. Kim Collins was third with 10.29, two hundredths ahead of James Dasaolu.

Jamaica’s Nickel Ashmeade reached the semi-final of the 100m and the final of the 200m at the World Championships so it was no surprise to see him take victory at a distance halfway in between. The time of 14.63 was among the fastest ever – albeit with a following wind of 3.6m/sec which was illegal for record purposes.

World and European 60m champion Richard Kilty, who is planning to move up to 200m next summer, was just outdipped with 14.64 – under the British record of 14.87 seconds – while Dan Talbot was third with 14.79.

Mark English prevailed in the rarely run 500m, made stranger for the sprinters in the field by being mainly on the road.

English, who reached the semi-final of the World Championships 800m, is used to novel events, though, as he has run two 600m this season, including one the previous weekend in Amsterdam. American Erik Sowinski was second in 60.74 ahead of Britain’s Conrad Williams.

Britain’s Beijing 400m finalist Rabah Yousif found the extra distance tough, though, as he crossed the line sixth in 61.38.

One of the star attractions of the meeting was missing after world champion Greg Rutherford pulled out on the day of the event having injured himself in training the night before, so the long jump was a low-key affair, won by South Africa’s Rushwal Samaai with 7.97m. Britain’s other Beijing representative, Dan Bramble, was second with a wind-assisted 7.93m and legal best of 7.68m.

Shane Brathwaite of Barbados took the opening race, the 110m hurdles. He clocked 13.48 as Britain’s Lawrence Clarke outdipped Kevin Craddock for second with 13.64.

Jonnie Peacock honed his preparations for the IPC World Championships in Doha next month by beating arch rival Richard Browne by exactly a quarter of a second in 11.11 in the Paralympic 100m. It was a below-par time for the Paralympic champion, but it came less than 24 hours after winning at the Brussels Diamond League in 10.99.

» Full results can be found here, while a report of the women’s events is here. Check out the September 17 edition of Athletics Weekly magazine for much more in-depth coverage