All go for Amber Anning 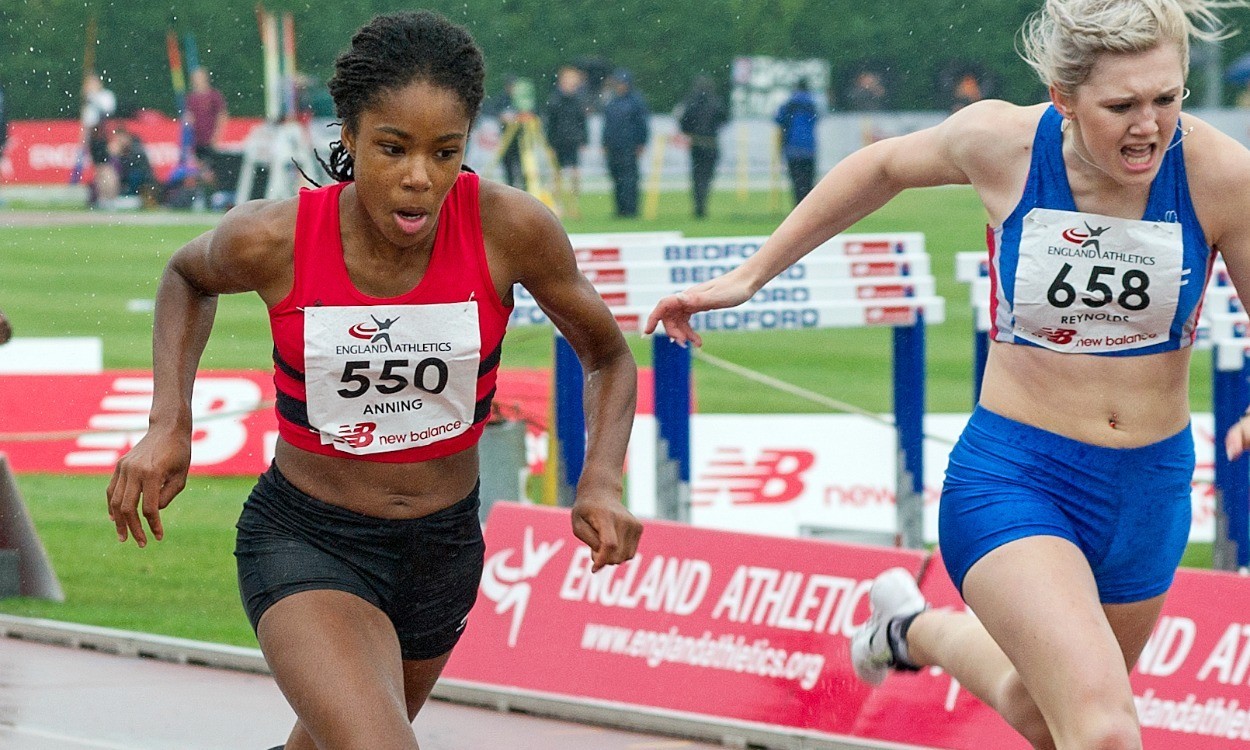 Among multi-talented Amber Anning’s latest achievements on a growing list of athletics accolades is setting a UK under-15 record and European age-14 best when winning the 300m up an age group at the England Athletics Under-17 Championships.

Also the holder of the UK age-14 best mark in the triple jump, the talented 15-year-old and her coach intend to continue with a multi-discipline training programme with the view to Amber’s long-term development.

Reflecting on her 2015 season, in which she broke Dina Asher-Smith’s UK under-15 300m record and claimed English Schools gold, she says: “I really didn’t expect to win the under-17 title. My goal had been to run sub-40 and make the final. My mum and Steve (King, her coach) said I could go sub-39 in the right conditions, but I wasn’t convinced. I was so shocked when I realised I had won and then saw the time, especially as the weather was so awful.

“The English Schools was a very special moment for me. I had wanted to win more than anything and running my first sub-25 at such a prestigious event meant so much to me as I realised all the hard work in training was starting to pay off.”

This year, the athlete who could technically run for any one of three countries – Britain, Australia or Jamaica, the latter due to where her grandparents are from – is setting herself the target of winning the English Schools under-17 300m title, breaking 12m in the triple jump and improving her 200m and 300m times. She is also looking forward to trying her first heptathlon and getting used to using starting blocks.

In the longer term, she wants to represent Great Britain at a senior championships, but first has her sights set on qualifying for World and Commonwealth Youth Games.

“The English Schools was a very special moment for me. I had wanted to win more than anything”

But with her talents extending beyond the sprints to an 11.65m triple jump PB – a UK age-14 record – and a 3252 pentathlon score, in addition to being in the Sussex under-16 county netball academy and reaching the national finals with her club earlier this year, which discipline does Amber like most?

“I love everything, but if I have to choose, I prefer sprints, especially the 200m and 300m. I do also really enjoy the triple jump because it’s different and requires so much strength and technique work. In the future, I see myself moving towards the 400m and hopefully still doing the triple jump too,” she says.

As if that wasn’t enough, until two years ago she swam competitively, which she feels really helped her endurance. At the time, she was still running cross country and went on to win four Brighton Mini Mile titles, still holding the under-11 record.

This multi-sport background perhaps stems from Amber’s early years in Australia. The family moved to the Sunshine Coast when she was five and she was encouraged to do athletics, cross country and swimming.

“I loved running and I really liked winning medals and standing on a podium!” she says. However, Amber also feels the swimming taught her some valuable lessons. “I didn’t swim enough to be very competitive, but I enjoyed it and learned how to lose regularly,” she adds.

She does throws training on Sundays with Judy Oakes and the three-time Commonwealth champion’s former coach, Mike Winch.

“I love everything, but if I have to choose, I prefer sprints, especially the 200m and 300m”

Speaking of her coach, she says: “Steve is the most positive person on the planet. I have been with him for nearly two years now and the technique changes he has made have been significant. I initially did a half-an-hour session with Judy for shot in July before the Southern pentathlon and I threw 1.5 metres further than before.”

King adds: “Amber fits very well into a strong senior group and it is often easy to forget how young she is. Amber has always been physically gifted so the priority since we have been working together has been on smoothing out her techniques and getting her ready physically and mentally for the bigger meetings.”

You can find further performance stats on Amber on Power of 10 here.