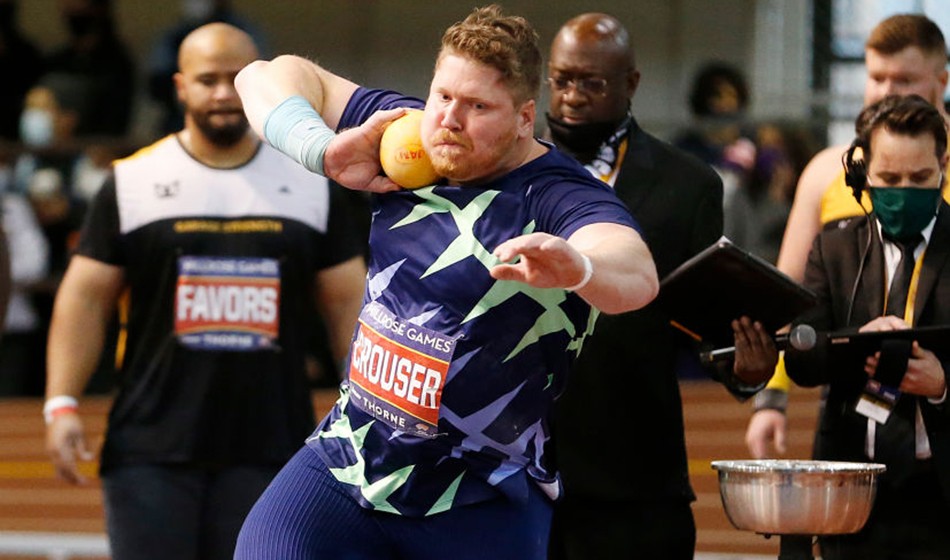 Ryan Crouser seemingly produces the biggest shot put throw in history, only for the mark to be scrapped due to a measuring malfunction

An exciting 114th Millrose Games in New York City featuring brilliant Wanamaker Mile races, a thrilling men’s 3000m and a super-close showdown between the world’s fastest men in the 60m was overshadowed by a technical cock-up in the men’s shot put.

Ryan Crouser appeared to have added 56cm to his world indoor record and 1cm to his outdoor world record with a massive 23.38m in the second round of his competition. But shortly after the meeting concluded it turned out the measuring system had malfunctioned.

Alfonz Juck, an athlete manager and media man, was one of the first to alert the athletics world when he tweeted: “Celebration ends, it was laser malfunction during shot put at @MillroseGames no WR and no other PBs. The actual mark was not 23.38 but 22.45. Informs agent Paul Doyle who is on site.”

Confusion reigned with no official news from the organisers and with the original result continuing to sit on the event website. But Crouser soon spoke to journalists at the venue and later said on social media: “There has been a lot of discrepancy regarding the competition. To clear that up, the mark was reported as 23.38m but there was a fault in the measuring system. The actual distance was 22.50m but it is an unofficial distance as it was measured after the comp.

USA Track & Field later clarified: “Officials found that the measuring device that was originally correctly located and calibrated, was discovered to be improperly positioned during the competition. As a result, all of the throws in the men’s shot put competition have been nullified.”

The incident will be embarrassing for the organisers of this World Indoor Tour Gold meeting but the event was still full of sparkling performances. 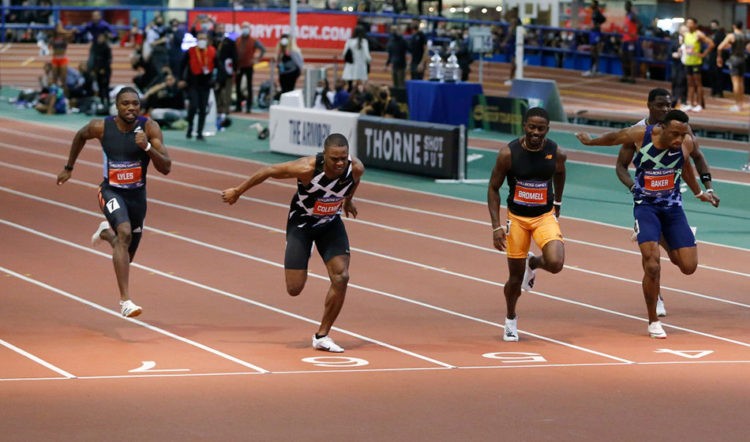 The men’s 60m saw the return of Christian Coleman following his 18-month ban for whereabouts failures. The world indoor record-holder did not look too rusty either as he clocked 6.49 to win by one hundredth of a second from fellow American Trayvon Bromell.

Middle-distance also fans enjoyed a treat with some fine racing and fast times. An exciting men’s 3000m saw the fast-finishing Geordie Beamish pass US duo Cooper Teare and Cole Hocker on the inside in the final metres to win in a New Zealand record of 7:39.50.

Beamish was a little detached with a couple of laps left and looked out of contention at the bell but he surged powerfully down the back straight on the last lap and then snuck past Teare and Hocker on the inside in the home straight to take a dramatic win.

“I felt relaxed and realised I had a bit left,” he said. “I had the option to run the mile but I was keen to run the 3000m here and I thought it would come down to a sprint against these guys at the end. It was fun. This is why we come to Millrose – to put on a show.”

In the men’s Wanamaker Mile, Ollie Hoare proved too strong for Josh Kerr as he set an Australian record of 3:50.83 to win. Kerr did not leave the Armory venue empty handed, though, as he beat Chris O’Hare’s Scottish record with 3:52.27 and was just a quarter of a second outside Peter Elliott’s UK record from 1990.

“Josh won bronze at the Olympics and has an amazing engine and is someone I really want to race against,” said Hoare, who was also celebrating his 25th birthday. “We didn’t get many opportunities last year so it’s good to get experience running against a guy of that quality.” 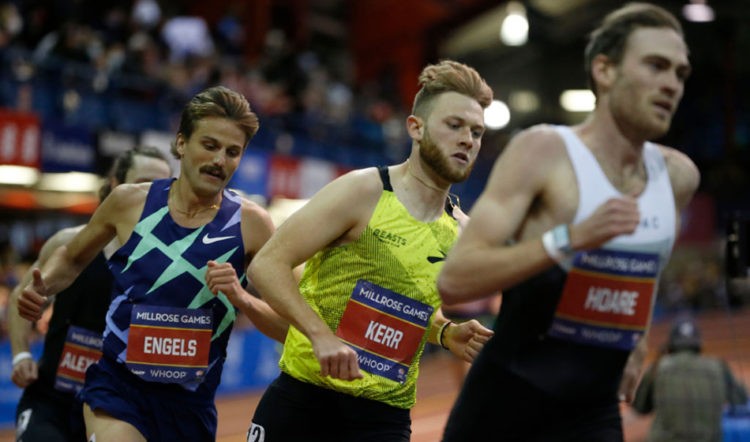 Kerr had surged into the lead in the closing stages in an attempt to run away from his rivals but could not react when Hoare counter-attacked. “The first race of the season is always going to be a bit rocky trying to figure out who you’re going to be this year.

“But I wanted to be aggressive and push and I knew a move would present itself. I might have pushed the moved a little early but that’s with hindsight. I gave it my all and second place was my best result today.”

The women’s Wanamaker Mile was no less intriguing as Elle Purrier St Pierre of the US powered away to win in 4:19.30 from Josette Norris, Konstanze Klosterhalfen and Jessica Hull. Olympic 800m champion Athing Mu was in touch with the leaders until around 400m to go but fell back in the latter stages and DNF’d.

“I attacked the race with confidence and believed in all the training I’d done over the years,” said the winner, who was racing for the first time since the Olympics. “The pace felt a bit fast from the start so I didn’t feel all that good but I tried to stay consistent with my pace and not let anybody get by me.” 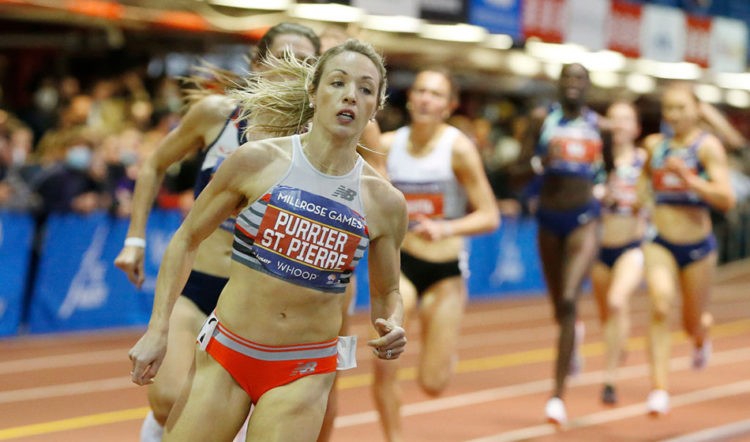 It was a good day for the On team as Monson, Hoare and Beamish were all wearing their new spikes.