US road records fall in Houston 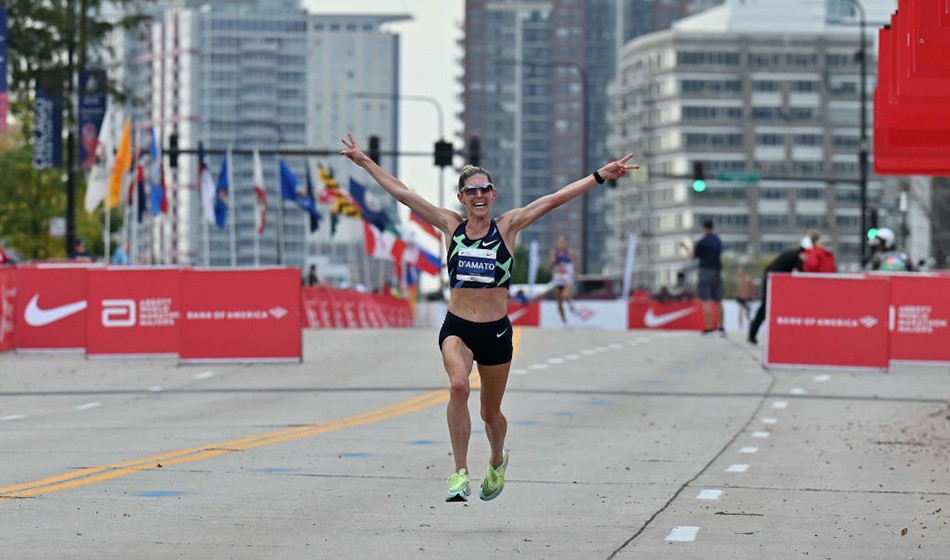 Houston has the nickname ‘Space City’ and the city lived up to its reputation on Sunday (Jan 16) when its marathon and half-marathon saw some stratospheric performances.

Keira D’Amato ran an American record of 2:19:12 in the Chevron Houston Marathon, while Sara Hall set a US record of 67:15 in the Aramco Houston Half-Marathon almost 15 years to the day after her husband, Ryan, set a US men’s half-marathon record in the same city.

It was a great day for British runners, too, with Jess Judd going No.4 on the UK all-time rankings for the half-marathon with 67:52 on her debut at the distance. In the marathon, Alice Wright and Luke Caldwell completed their first-ever marathons in an impressive 2:29:08 and 2:11:33 respectively.

D’Amato broke Deena Kastor’s American record of 2:19:36 which was set in the London Marathon in 2006. The 37-year-old’s progression has been far from standard either. She did not run from 2009-2016 and then returned as a fun runner initially, although her performances improved to the extent that she clocked 2:22:56 at the Marathon Project event in Arizona in 2020.

On Sunday D’Amato found herself going toe-to-toe with three-time Houston Marathon winner Biruktayit Eshetu Degefa of Ethiopia but by halfway (69:40) D’Amato had cut loose and, helped by pacemaker Calum Neff, maintained her pace in the second half.

Wright finished runner-up with USA’s Maggie Montoya clocking the same time of 2:29:08 in third, whereas Emily Kearney of Wirral AC ran 2:34:28 on her marathon debut.

From Worcestershire originally, Wright was a fine teenage runner in the UK but overshadowed by Judd in many national events. However in recent years she has been based in the US as part of a Hoka-sponsored squad and made a few aborted attempts at a marathon debut before finally coming good in Houston.

As for the winner, D’Amato said: “I’ve had a very unique running career and my running has evolved throughout my life. I have experienced high school running and college running, I tried post-collegiate running a little bit and got injured. Then I quit running for a while and came in as a hobby jogger, a recreational runner, and somehow I got this second opportunity.

“It had been wild. I just can’t believe I’m sitting here as the American record-holder in the marathon.”

D’Amato added: “With the pacers, we went out at American record pace and I really believed in my heart and in my legs, in my soul and in my brain, that I was capable of breaking the American record. It never really felt that good, but I just tried to hang in there.”

This is how Keira D'Amato set a US marathon record of 2:19:12 at the Houston Marathon 🇺🇸

This was the 50th staging of the Houston Marathon and during that time the Brits have made their mark with Veronique Marot winning the women’s title three times, while Charlie Spedding and Colin Moore won the men’s race in the 1980s and 1990s.

Ethiopia has dominated the event hugely in recent years, though, with the last 14 women’s winners prior to 2022 being from that country, whereas Ethiopians have won 11 of the last 14 men’s titles too.

But on Sunday James Ngandu of Kenya won the men’s race in 2:11:03 on his marathon debut after making his break with a little over a mile to go to beat Bahrain’s Abdi Abdo by seven seconds.

In seventh, Caldwell was just outside the World Championships qualifying standard of 2:11:30 but made a fine first attempt at the distance.

The half-marathon was also full of eye-catching performances with the women’s winner, Vicoty Chepngeno of Kenya, setting a North American all-comers’ record as she went No.11 on the world all-time rankings with 65:03.

Hall, 38, finished runner-up and in doing so took 10 seconds off Molly Huddle’s American record, which was also set in Houston in 2018. With her husband Ryan Hall also running a US men’s record of 59:43 in Houston in 2007, it’s clear the course and conditions are ideal for fast times.

Another record for @SaraHall3 after clocking 1:07:15 at @HoustonMarathon and breaking the US and area women's half marathon record of @MollyHuddle from 2018 🇺🇸

Hall did this 15 years after husband @ryanhall3 set the men's half marathon record on the same course 🤯 pic.twitter.com/JdUx3UELWe

“I thought it would be really special to do it today, with it being 15 years since Ryan set the record here,” said Hall. “That day changed our lives forever. It launched his career and our lives were never the same after that day. Fifteen years later, to be able to do that, it also shows the story of our careers.

“For him, he just knocked it out of the park from the beginning and then for me it has taken 15 years of grinding and persevering to get to this point.”

Dominique Scott of South Africa ran a PB of 67:32 with American Fiona O’Keeffe fourth in 67:42. Then came Judd who, like Wright is also sponsored by Hoka, with a performance that means the only Brits who have run quicker over 13.1 miles are Paula Radcliffe, Liz and Eilish McColgan.

The men’s half-marathon was won by Ethiopia’s Milkesa Mengesha in 60:24. The 2019 world junior cross-country champion is only 21 and he surged away from John Korir of Kenya in the closing stages.