Su Bingtian and Reece Prescod show their pace in Birmingham 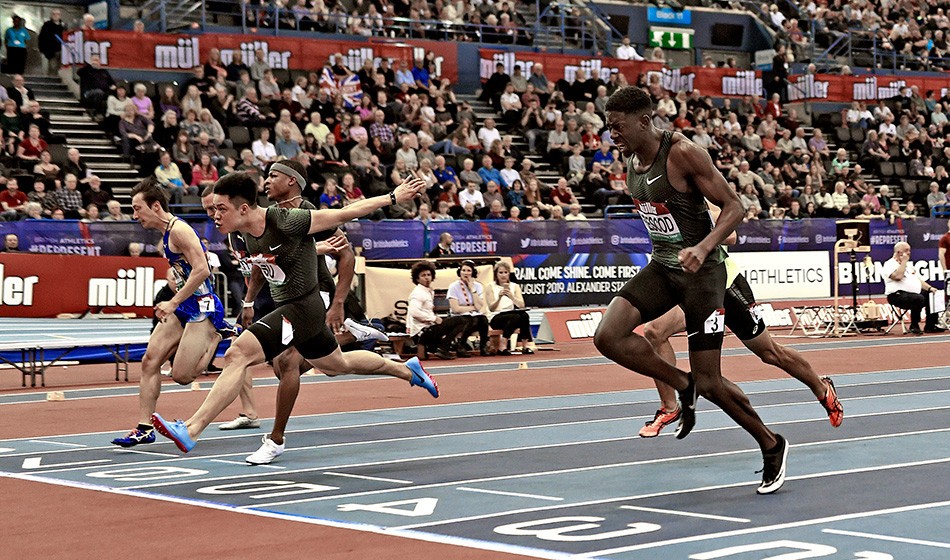 Chinese sprinter and the British No.1 impress in the men’s 60m at the Müller Indoor Grand Prix

Su Bingtian’s 60m victory over British sprinter Reece Prescod was one of the highlights of the Muller Indoor Grand Prix in Birmingham. Yet much of the post-race talk focused on the fact the host nation is unlikely to have anyone in the blue riband men’s sprint at the European Indoor Championships in Glasgow next week.

Asian 60m and 100m record-holder Bingtian sped to 6.47 ahead of Prescod’s 6.53. The runner-up’s mark equalled his PB and is easily the quickest by a Briton this year, but both Prescod and CJ Ujah – the only Brits who have beaten the 6.60 qualifying standard – are skipping Glasgow to focus on the outdoor season instead.

In third, Mike Rodgers of the United States clocked 6.54. Takuya Kawakami, in fourth, set a Japanese record of 6.54, while Richard Kilty – the former world and European indoor champion – was fifth in 6.64.

With the GB team being named on Sunday, Kilty feels his championship pedigree gives him a strong case to be chosen, though. He has also run well inside the European Athletics standard of 6.78.

“My message to selectors is that I am a championship performer who has never been beaten in a major championship,” said Kilty, who is returning to form following Achilles injury. “Hopefully they have some faith in me. It would mean the world to me to stand on the line after the year and a half I have had.”

As for Prescod, he said: “I think this will silence the people who are trying to put me down about my start. I have had a good winter, I have put the hard work in on the track, and I have put a better series together. I would still like to take another tenth off and get into the 6.4s, but I will go back and work on that with my team. I am really happy with that, to be honest.”

The penultimate meeting of this season’s IAAF World Indoor Tour – with the final in Dusseldorf on Wednesday (Feb 20) – saw a 1500m world record from Samuel Tefera of Ethiopia, whereas in the field another world indoor champion from 2018, Juan Miguel Echevarria of Cuba, won the long jump with 8.21m as Tajay Gayle of Jamaica was runner-up with 8.10m.

Naoto Tobe of Japan continued his good form in the build-up to his home Olympics next year when he won the high jump with 2.29m.

Jarret Eaton ran 7.51 to beat fellow American Freddie Crittenden by two hundredths of a second in the 60m hurdles. British champion David King won one of the two heats but finished sixth in the final in 7.68.

The 400m saw Nathan Strother run 46.45 to beat Luka Janezic and there was drama in the home straight as the athletes nearly fell in the final metres when they made contact as the American passed the Slovenian sprinter.

A tangle at the start of the 800m did result in athletes hitting the track. Guy Learmonth and Cornelius Tuwei were worst affected as they fell on the second bend and did not finish the race, while Marcin Lewandowski was also impeded.

In the melee, Joseph Deng surged clear to win in an Australian record of 1:47.27 from Jamie Webb’s 1:47.51, while Joseph Reid was third in a PB of 1:47.83 – the two Brits pretty much booking their places on the team for Glasgow.