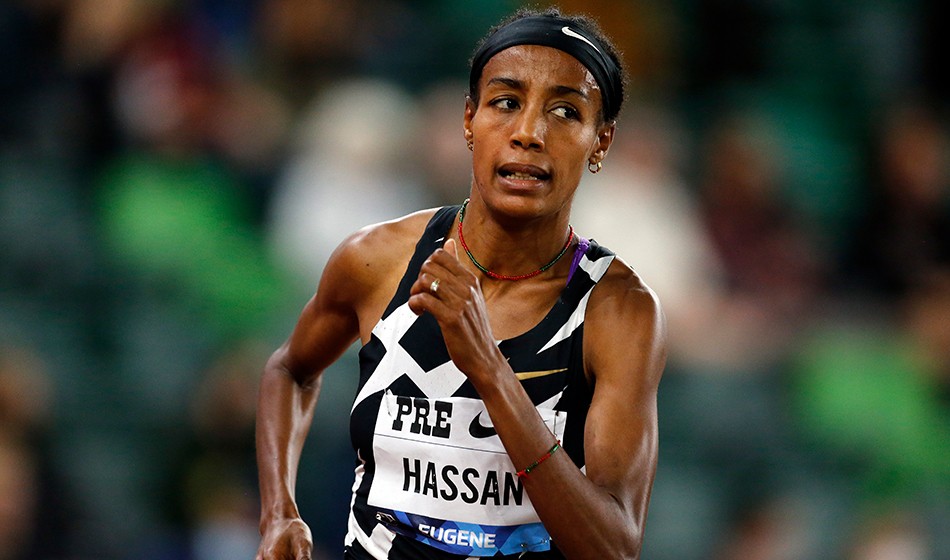 Not surprisingly looking a little fatigued from her Olympic exertions in Tokyo, Sifan Hassan’s crack at the world 5000m record of 14:06.62 at ‘Distance Night’ on Friday (Aug 20) at the Prefontaine Classic in Eugene, Oregon, faltered in the latter stages as she faded to run 14:27.89.

The Dutch runner won 5000m and 10,000m titles plus 1500m bronze at the Games earlier this month and in the early stages on Eugene she followed pacemakers Kate van Buskirk and Beatrice Chebet through 3000m in 8:30.54.

At this point Hassan was on track to beat Letesenbet Gidey’s world record set in Valencia 14 months ago but after running 2:50/kilometre pace for the first 3000m, she slowed with a 2:59 fourth kilometre, at which point she lost contact with the pacing lights and the record hopes looked increasingly bleak.

Hassan battled through the final stages but fell well outside her goal, although she won the race by 15 seconds from Ethiopian duo Senbere Teferi and Fantu Worku.

All the hype surrounded Hassan’s race but instead it was Francine Niyonsaba who produced the most eye-catching performance of the night when she ran the second fastest time in history over the rarely run two miles distance.

The race was billed as a world record attempt by Ethiopia’s Gidey on Meseret Defar’s 8:58.58 mark. But Niyonsaba powered past Gidey into the lead with 650m to go before going on to win easily in 9:00.75 as Gidey wound up six seconds behind and Olympic 5000m silver medallist Hellen Obiri was third.

As an 800m runner Niyonsaba won the world indoor titles in 2016 and 2018 and finished runner-up in the 2016 Olympics and 2017 World Championships behind Caster Semenya.

However she was forced to move up in distance due to the new rules relating to testosterone levels and at the Tokyo Games she placed fifth in the 10,000m final in 30:41.93.

Judging by her form in Eugene, she would have been a factor at 5000m in Tokyo as well but after seemingly making the Olympic final in that event she was disqualified for a lane infringement in her heat. 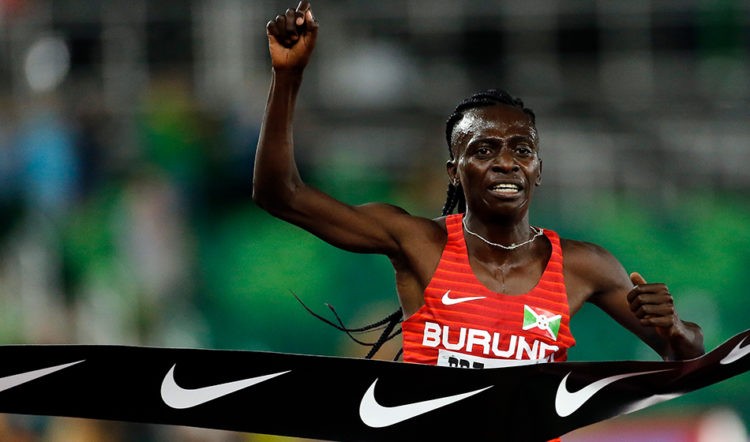 Elsewhere in Eugene, Craig Engels gave a Steve Ovett-style wave to the crowd as he passed the leader Charles Philibert-Thiboutot with 100m to go in the men’s international mile.

The celebration proved premature, though, as Geordie Beamish of New Zealand, who was a distant eighth with 300m to go and fifth with 200m to go, produced an inspired final 100m to take victory in 3:54.86.

The Bowerman Mile featuring Olympic champion Jakob Ingebrigtsen is among the races in the main Diamond League programme at the same Pre Classic meeting on Saturday.

The event also features a women’s 100m showdown between multiple Olympic champion Elaine Thompson-Herah and Sha’Carri Richardson, who was forced the miss the Games due to a cannabis positive.

You can read more about the meeting in our preview here and for UK viewers it is on BBC red button from 9pm.