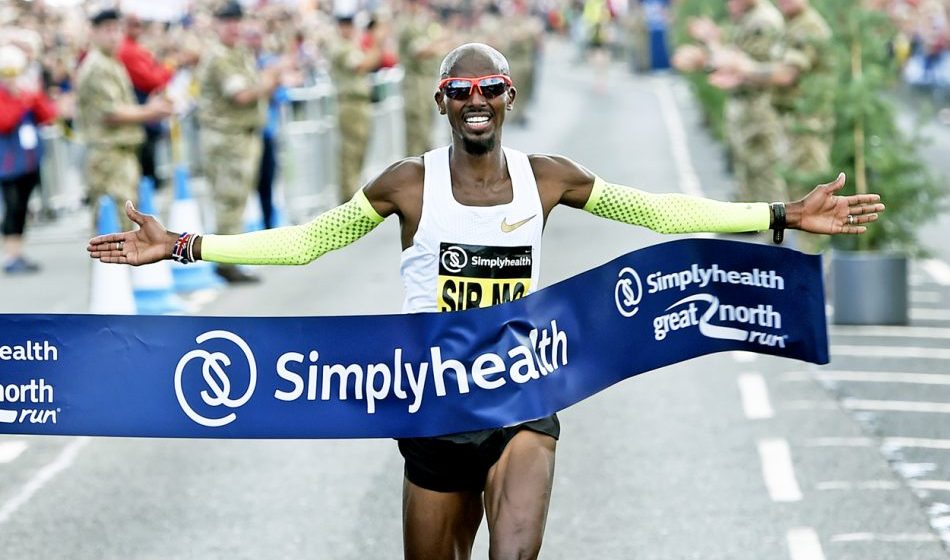 Forcing the pace relentlessly for 13.1 miles, Mo Farah looked like a man on a mission as he took his fifth Simplyhealth Great North Run title on Sunday.

The 35-year-old was using the race as a springboard to the Chicago Marathon on October 7 and judging by his 59:26 victory on Tyneside he looks poised to improve his British record of 2:06:21 for 26.2 miles.

“I really wanted to test myself, see how I am and ask questions of myself,” he said. “I’d come all way from US, so I didn’t want to go easy.”

Farah was beaten in his first Great North Run in 2013 by Kenenisa Bekele after a tremendous clash with Bekele and Haile Gebrselassie. Five years later, with several more global track titles and road racing experience under his belt, he looked supremely confident as he strode away from Jake Robertson of New Zealand 10 miles into the race.

“That one was tough,” said Robertson. “Not only with the heat but the way the race was run. It was fast and slow – with surges throughout the race. It was one of the hardest ways to run 59 minutes.”

Robertson added: “I wasn’t looking to break 60. I was looking to win the race. But I was facing a legend and once again he proved why. I didn’t challenge him like the way I wanted but I’ll take lessons from it and into my next marathon in Toronto.”

Abdi also put Farah’s fierce front-running performance into perspective when he said at the post-race press conference: “He is really in shape. From the start he was pushing so hard. I stayed with him for eight miles and then had to run at my own pace. It’s an honour for me to sit next to the king and to train with him.”

The venue of Farah’s marathon next month is nicknamed the Windy City. Given this, it was appropriate that he should get used to it with some gusty weather on Tyneside as he passed 10 miles in 45:14 with yet another mile in the 4:20-30 range.

Sweeping down on to a sun-drenched South Shields seafront for the final mile, Farah had dropped Robertson and stretched away with his PB of 59:22 a target. Roared on by a huge crowd, he just missed his UK record but still sent a strong message to his rivals ahead of Chicago.

“Usually I run the Great North Run at the end of the track season but this time it’s partway through a marathon preparation and I’m on the up. Training’s gone well in Flagstaff in the last six weeks and my aim now is to stay injury free and focused.”

Behind the top three, Americans Scott Fauble and Ryan Vail placed fourth and fifth in 62:18 and 62:19. Hiroyuki Yamamoto of Japan was next in 62:49, with Daniel Wanjiru of Kenya – the 2017 London Marathon winner – seventh in 63:40 after having paid the price for going with Farah’s early pace.

For British endurance fans this was a Mo show in more than one way. The second Briton home was Mo Aadan – a 28-year-old from Thames Valley Harriers who clocked 63:59 in ninth as he was followed home by fellow Brits Andy Vernon (the AFD runner clocking 65:04), Matt Sharp (a former triathlete from Team Spy who ran 66:44), Dominic Shaw (a local sports journalist from New Marske Harriers who clocked 67:11) and Jonny Mellor (68:01).

Like Farah, Aadan was born in Somalia and moved to the UK at an early age. Based in the White City area of London, he went to altitude in Kenya before this race but missed some training due to an illness and now hopes to improve his 62:34 PB – set when finishing 36th for Britain at the IAAF World Half Marathon Championships in Valencia in March – when he races in the Commonwealth Half Marathon Championships in Cardiff next month.

Aadan has trained with Farah in the past and says he has always been his role model. It is no coincidence, he adds, that he began to take running seriously in 2011-2012 – when Farah began winning global titles. One day he hopes to follow his hero into the marathon, too.

One man who has won more titles at the Great North Run than Farah, though, is David Weir and the wheelchair racer took his seventh victory over 13.1 miles on Tyneside.

The 39-year-old put in a powerhouse performance as he built an early lead of over a minute over runner-up JohnBoy Smith before going on to clock a course record of 41:16.

It bodes well ahead of his forthcoming marathons in Berlin next weekend and New York City in November.