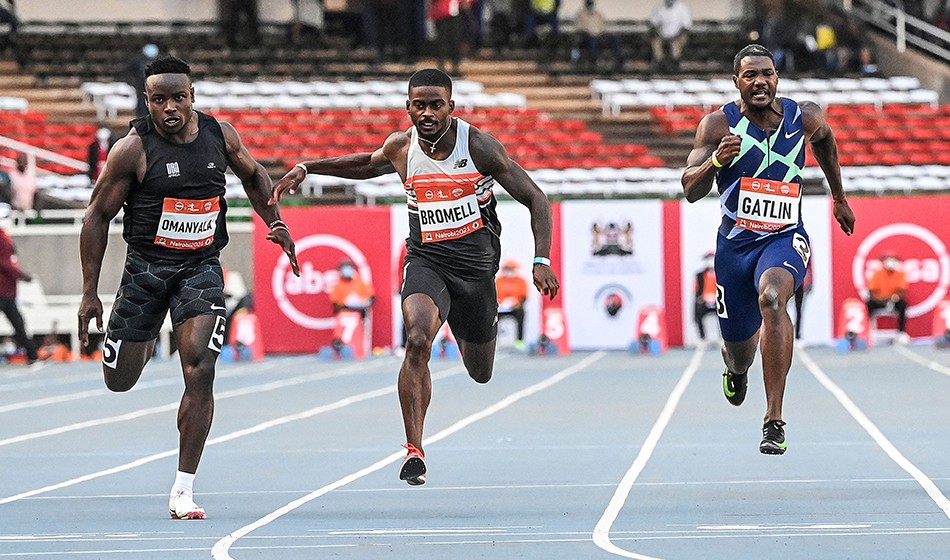 Sprinters go No.6 and No.8 on world all-time rankings at Kip Keino Classic at altitude venue in Nairobi

Trayvon Bromell went equal No.6 all-time on the men’s 100m all-time world rankings and Ferdinand Omanyala went No.8 with a breakthrough performance and African record of 9.77 as he finished runner-up to the American on Saturday (Sept 18) in Kenya.

Neither athlete reached the Olympic final in Tokyo but have clearly hit great late season form, while they will also have been assisted by an altitude of more than 1600m (5300ft) at this Continental Tour Gold event.

Benefiting from the thin air and a following wind of 1.2m/sec, Bromell improved his PB by one hundredth of a second to clock a world-leading mark for 2021. Only Usain Bolt, Tyson Gay, Yohan Blake, Asafa Powell and Justin Gatlin have run quicker.

Remarkably, Omanyala began this year with a PB of merely 10.32 but the Kenyan is now No.8 all-time as he leapfrogged the likes of Maurice Greene, reigning Olympic champion Lamont Marcell Jacobs and Carl Lewis on the all-time lists.

“I may not have grabbed the gold in Tokyo but where I come from, I’ve already won,” Bromell posted on social media. “I pray that I can continue to show you all that no matter what you go through, no one on this earth can control your fate.”

Elsewhere there were a number of host nation victories. These included world under-20 bronze medallist Noah Kibet beating older rivals to take the men’s 800m in 1:44.97, while Vincent Keter took the men’s 1500m with 3:35.99.

There was no home win in the men’s 3000m steeplechase, though, as Olympic champion Soufiane El Bakkali out-sprinted Abraham Kibiwot in 8:21.20.

Everything you need to know about this weekend's Liverpool Cross Challenge and British trials for the Euro Cross. https://athleticsweekly.com/event-news/jess-warner-judd-and-marc-scott-lead-liverpool-line-ups-1039963031/