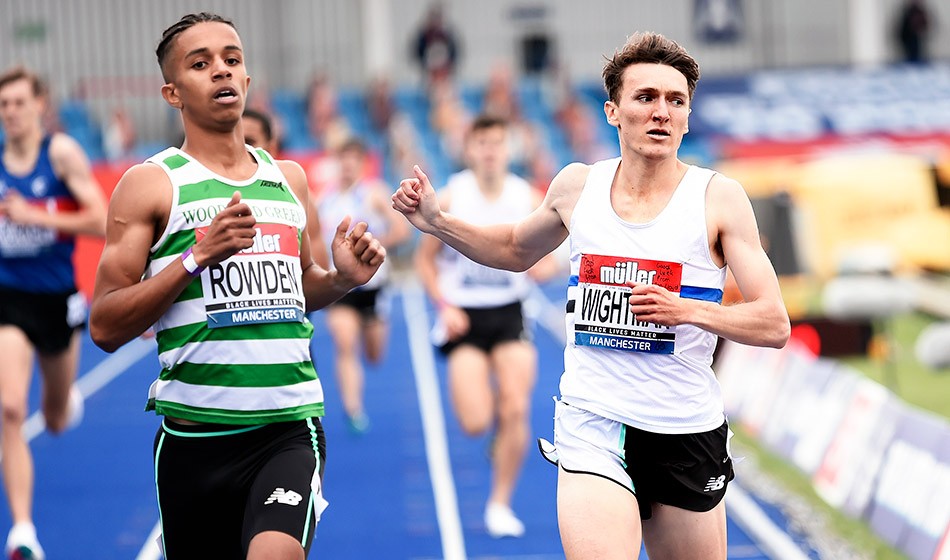 Youngster continues his comeback with impressive two-lap win, while Keely Hodgkinson and Aimee Pratt also make their mark in Manchester

Daniel Rowden underlined his athletic talent and continued what has been a remarkable return to fitness by winning 800m gold during an eventful second day of the Müller British Championships at the Manchester Regional Arena.

The 22-year-old, who had surgery in April of last year due to issues with his celiac artery which had seen him regularly suffering from stomach pains, was in form after his recent win in Gothenburg and, back on home turf, he impressively overtook Jake Wightman to hit the line first in a stadium record of 1:45.94.

Scotland’s Commonwealth and European 1500m bronze medallist had to settle for silver in 1:46.26, while a personal best of 1:47.94 from Yusuf Bizimana won bronze.

The battle between Wightman and Rowden had been expected to be a close one – Rowden having clocked a PB of 1:44.74 in that win in Sweden while Wightman had moved to second on the UK all-time list for 1500m when running 3:29.47 at the Diamond League meeting in Monaco.

The pre-race prediction proved to be just right. When it came to the British Championships final in Manchester, the elder of the two athletes had come off the final bend in the lead before ultimately being overhauled by the fastest winning time at these championships since Curtis Robb’s 1:45.16 in 1992.

“This has been very special,” said Rowden, the 2017 European U23 silver medallist. “I am very happy after a difficult year with surgery in April 2019 so it has been a tough road back. It sorted me out but it took a while to get back going again.

“To take the British title for the first time is incredible. When I saw Jake I just remembered my coach saying stay relaxed and keep my form and go when I’m ready to go and give it everything.”

He added: “The strength in depth at 800m in the UK is amazing. Next year’s champs will be crazy but I will do my best.”

The last 5 days in hospital have been pretty tough. For years I’ve suffered with stomach pains when training but never had any answers. But thanks to the medical support at British Athletics I was diagnosed with MALS and a damaged celiac artery, and was advised to have surgery. I’d been training hard and dreaming of winning the European U23s and making the final of the world champs so this has been a hard pill to swallow. The recovery time will run well into this season, but I am hopeful that I’ll come back and get even fitter and stronger for 2020. To all the people that have been there for me over the last little while. Thank you 🙏🏽 Onwards and upwards 👊🏽

The strength on the women’s side is formidable and, with the likes of Laura Muir and Jemma Reekie absent, teenager Keely Hodgkinson took a great opportunity to show her skills when she commandingly strode to victory over the two-lap distance.

Ellie Baker had opted to push the pace on the closing lap but the former European U20 bronze medallist eased past with around 300m to go and never looked back, kicking away to win in 2:03.24. Isabelle Boffey came through for silver in 2:04.73, while Baker clocked 2:04.80.

“Lockdown was really hard getting through the training, but it has really paid off,” said 18-year-old Hodgkinson, the British indoor record-holder. “It was a messy race – I found myself boxed in, found a way out and I’m really pleased with how it went.

“I’m hoping that I managed to keep strong and focused. I’ve learnt a lot from watching others and hope to continue to progress from this.”

Another athlete who has had injury struggles to overcome is George Mills, however he was able to add the outdoor 1500m British title to the indoor gold he won in Glasgow earlier this year.

World championships finalist Neil Gourley looked to be the one to beat in Manchester and had led into the closing stages but Mills won what proved to be a tactical battle as he clocked 3:51.39. Gourley was second in 3:51.54 and Josh Lay third in 3:51.60.

In the women’s 1500m, which was the final race of the championships, Laura Weightman continued her impressive season when she claimed a clear 1500m win in 4:09.76 for her fifth national title. The newly-crowned 5000m champion Jess Judd was second in 4:12.35 and Katie Snowden third in 4:14.00.

There were impressive performances in the steeplechase events, too, with Aimee Pratt admitting that she will target the British record before the season is out after lowering her world lead by almost four seconds in a time of 9:30.73, which was not only a personal best but a championship and stadium record.

She added: “It feels a bit false to get a world lead with the Americans and Kenyans unable to travel but I’ll take it!

“I am maturing as an athlete and I think I am only scratching the surface of what I am capable of and I really think I can get better. I have another race next week and I will target the British record (Barbara Parker’s 9:24.24 from 2012). It should be a good field to test me.”

Phil Norman was the victor in the men’s event, also in a stadium record time, as a run of 8:32.51 secured him his first British title in the discipline. Mark Pearce was second and Dan Jarvis third in personal bests of 8:33.61 and 8:39.70 respectively.

Marc Scott has been dominant on the roads this summer and the British 5km record-holder was similarly convincing on the track as he controlled the men’s 5000m final to win in a stadium record of 13:32.98. 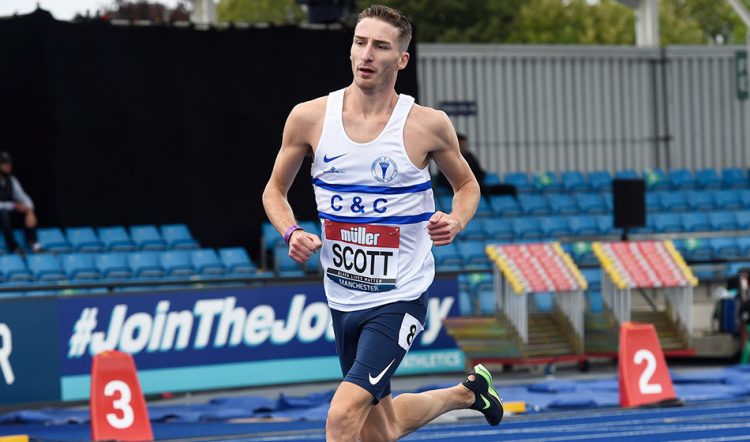 The 5000m race walk events got the day’s action going, with Gemma Bridge winning the women’s contest in a personal best of 22:51.15. Silver went to defending champion Bethan Davies in a season’s best 23:46.04, while Jasmine Nicholls’ PB of 24:52.89 won her the bronze.