Jake Wightman storms to UK No.2 all-time in Monaco 1500m 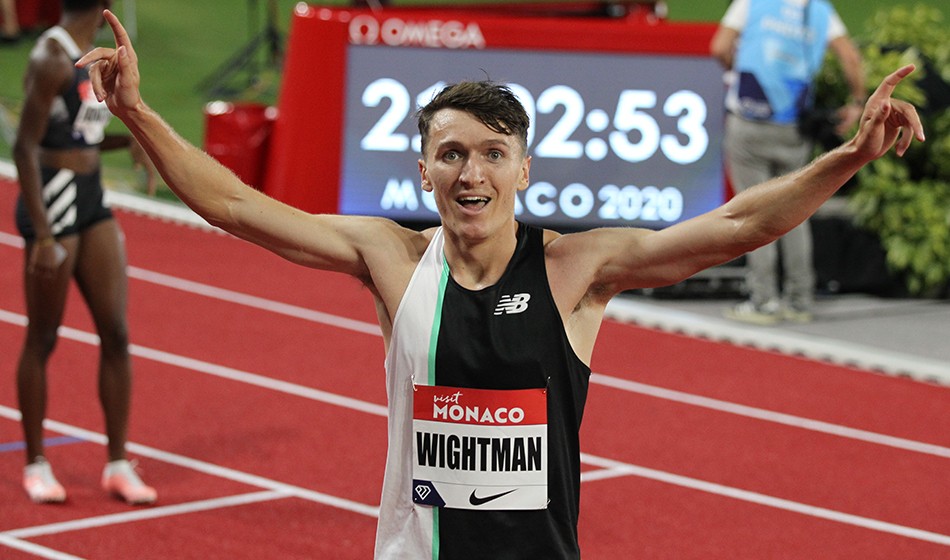 European and Commonwealth medallist runs 3:29.47, with only Mo Farah having gone faster among Brits, while Jakob Ingebrigtsen breaks European record

Despite telling AW that he had been training more like an 800m runner than a 1500m athlete over lockdown, Jake Wightman further proved his prowess at the longer distance by taking more than two seconds off his PB to move to second on the British all-time list at the Monaco Diamond League.

Finishing third in a race won by Kenya’s world champion Timothy Cheruiyot in 3:28.45 ahead of Norway’s teenage star Jakob Ingebrigtsen who broke the European record with his time of 3:28.68, Wightman clocked 3:29.47, with only Mo Farah having gone faster among Brits.

Wightman’s time in Monaco sees him move ahead of Steve Cram, who was commentating on the race, as well as other British middle-distance greats such as Seb Coe and Steve Ovett on the UK all-time list.

Charlie Da’Vall Grice, who is fifth on the British rankings with his 3:30.62 PB set in Monaco last year, finished eighth this time in 3:34.63.

READ MORE: Speed is of the essence for Jake Wightman

“I think whenever you come to Monaco you know you’ve got a chance to run quick, so I wanted to run a PB, under 3:31,” said the Scot. “To go under 3:30 is what a lot of 1500m runners want to do in their career so for me to tick it off today is a big milestone.

“I knew I was fit and I felt that there was nothing to lose, I may as well go for it, and it paid off.”

Wightman’s aim over the coming years is to mix racing both the 800m and 1500m on the major stage and now his attention turns back to the two-lap event.

“I’ve got the British Championships coming up but I’ll maybe try and get into Stockholm to race an 800m,” he said. “That’s my one and only 1500m this season. I’ll try and race some 800m and get quicker over that now.”

After holding off Ingebrigtsen and coming close to his PB of 3:28.41 set in Monaco in 2018, Cheruiyot said: “The first lap was hard so I tried to close on the last lap because Jakob was coming fast.

“After training so long on my own, it is really good to finally see a stadium with fans, it’s amazing.”

Click here for further coverage of the Diamond League action in Monaco, which included a world 5000m record by Uganda’s Joshua Cheptegei, and here for an interview with British 1000m record-breaker Laura Muir.

Here you’ll find an interview with Laura Weightman, whose 14:35.44 5000m puts her second behind only Paula Radcliffe on the British all-time list.