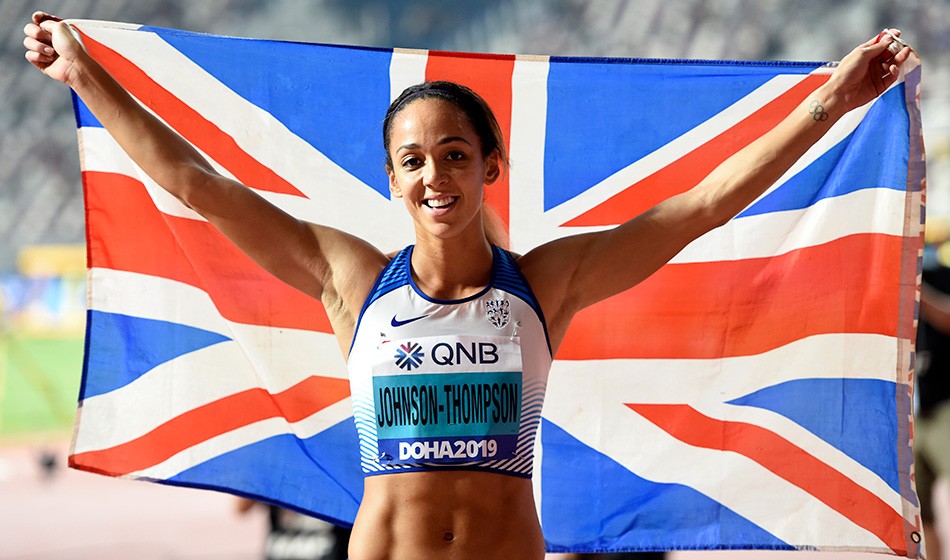 Barely 24 hours after Dina Asher-Smith had scorched her way around the Khalifa Stadium track to 200m victory, the multi-skilled Katarina Johnson-Thompson produced the finest heptathlon performance of her career to score a British record of 6981 points which put her sixth on the all-time lists and vanquished the defending champion Nafissatou Thiam.

For a long time now, the 26-year-old has lived with the pressure of being the successor to Jessica Ennis-Hill. There have been recent highs such as Commonwealth, world indoor and European indoor titles, but there have also been crushing – and high-profile – disappointments.

It is to her great credit that those have been learned from and overcome. Now, after breaking the three-time world and 2012 Olympic champion’s national mark, it’s official – Britain has a new heptathlon hero.

The tone was set on day one when big personal bests in the 100m hurdles and shot put had put Johnson-Thompson in control as the competition resumed with the long jump only minutes after the British national anthem had finished playing for Asher-Smith’s medal ceremony.

Perhaps she was watching her team-mate ascend to the top step of the podium in the corner of the stadium closely, or perhaps the scene provided inspiration of a more subliminal kind, but Johnson-Thompson’s competitive instincts kicked in quickly as she set about trying to grow the 96-point advantage over the Belgian Olympic and European champion with which she had begun day two.

Thiam started her chase with a modest jump of 6.25m, starting her leap from a long way behind the board, while the leader opened up at 6.32m – an effort with which she looked rather non-plussed. The expression would change after the following round, however.

Thiam could only manage a second-round 6.35m before she found herself being put under real pressure by her rival. Johnson-Thompson’s reply saw her soar out to 6.77m, the furthest she has ever leapt in a heptathlon.

Thiam mustered 6.40m in response (again, she landed a long way behind the take-off board) and, though she fouled her final jump, Johnson-Thompson had already inflicted substantial damage, her lead widening to 226 points on a total of 5233, with Thiam on 5017 and American Kendell Williams third with 4792.

The job was not done yet, however, particularly given the fact that the next event, the javelin, is traditionally one in which the Belgian holds a sizeable advantage thanks to her personal best of 59.32m.

It remained to be seen how much she might be affected by a persistent elbow injury, though, and also whether or not Johnson-Thompson could rise to the challenge once again.

The world and European indoor pentathlon champion opened with an encouraging 42.21m, while a frustrated Thiam deliberately fouled her first effort after it landed around the same distance.

With her opponent looking uncomfortable, Johnson-Thompson again chose the perfect moment to strike as she sent her second-round effort out to 43.93m which represented a personal best of 1.01m.

Thiam went further second time around, reaching 48.04m, but that was where her javelin competition ended after she opted not to take a third throw and was seen icing her injured joint in the immediate aftermath. Johnson-Thompson threw 40.55m to complete her series as the gold medal was all but placed in her grasp.

Thoughts began to turn towards not if she might win the title, but rather by how much. With six events gone, and only the 800m – in which she has a best time eight seconds quicker than the Belgian – remaining, the chance of a record-breaking victory presented itself.

Hitting the front not long before she took the bell in 1:03.14, every sinew was strained in the pursuit of history and a closing 200m of 31.38 gave her the personal best, the points tally and the title she so craved.

“These whole two days have been so fast and because it has been at night, it’s actually felt like a dream,” she said. “Doing it under the lights and everything was unbelievable. I can’t believe this is the result. I have had so many attempts at this result so to perform on this stage makes me so happy.”