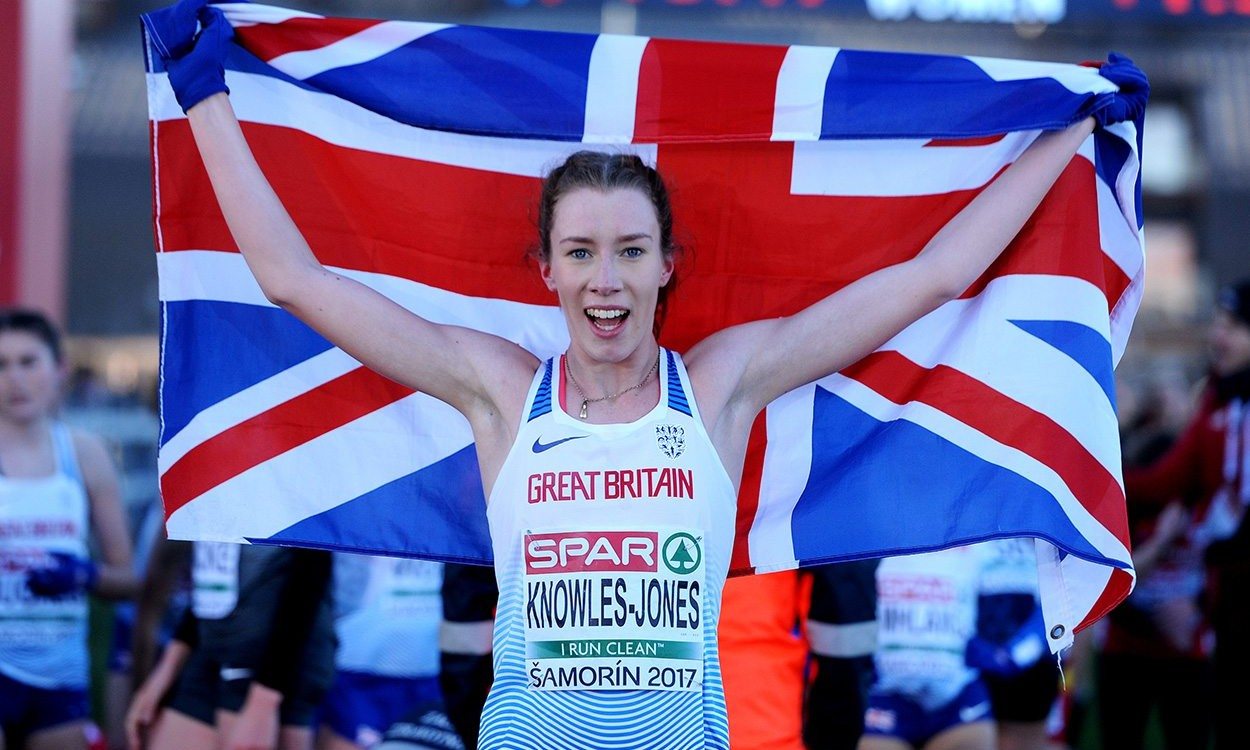 Harriet Knowles-Jones after her under-20 win

Success in Samorin for women’s and relay teams, while Harriet
Knowles-Jones wins and Andrew Butchart and Jessica Judd take bronze

Great Britain and Northern Ireland enjoyed another medal-laden Spar European Cross Country Championships, finishing top of the table after a day of success in Samorin, Slovakia.

There were five gold medals in all on a day when the sun came out but the temperatures very much stayed down at the impressive X-Bionic Sphere venue.

Every British women’s line-up emerged victorious in the team standings, there was a win in the inaugural mixed relay event and Harriet Knowles-Jones got the day off to a winning start in the women’s under-20 race.

Andrew Butchart also produced a fine performance in taking individual senior men’s bronze, while Jessica Judd landed under-23 women’s bronze and there were also team bronze medals for the senior and under-23 men’s line-ups.

British women get that winning feeling

As expected the individual senior titles went to Turkey, with African-born athletes winning both men’s and women’s events.

With the first three from each nation counting towards the team standings, rather than the top four of previous years, Charlotte Taylor was first Briton home in sixth, followed by team captain Emelia Gorecka in eighth and Gemma Steel ninth. Steph Twell was 10th, Lily Partridge 15th and Elle Vernon 48th.

“I am so proud of everyone,” said Gorecka. “I take the role of captain, which I enjoy, very seriously. All the girls were pumped up beforehand and it’s such a nice team atmosphere.

“I am so glad to be able to get here and finish top 10 on such a challenging course. If you said to me three months ago that I would have made these championships, let alone come top eight, I wouldn’t have believed you.” 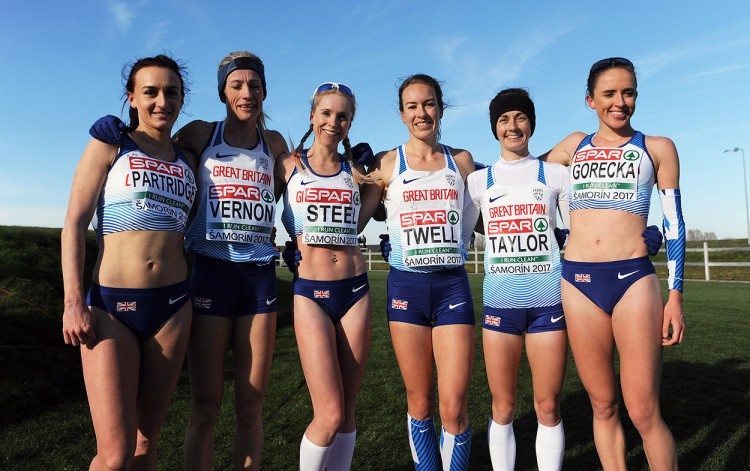 In the senior men’s event, Butchart’s bronze was reward for taking the fight to the opposition.

It was he and Dewi Griffiths who set off at pace, the Welshman making the early running before Butchart edged to the front with Spain’s Adel Mechaal in close attendance. With trials winner Ben Connor also running well, Britain had occupied three of the top four slots in the race, before Griffiths’ hamstring seized up and he could not continue.

As the race began to splinter, Butchart held on to the lead but Mechaal would not budge and Turkey’s Kaan Kigen Ozbilen worked his way up.

The Spaniard and Ozbilen began to build a gap at the head of affairs and ultimately it was the man who was born in Kenya but qualifies under the controversial residency rules who sprinted clear to take gold over the 10.18km in 29:45. Butchart held on for third in 30:00, with Mechaal clocking 29:54.

“It was very different to last year,” said Butchart, part of the gold medal-winning men’s team in Sardinia 12 months ago. “With the weather being so cold this year, training had to be different but out on the racecourse it went perfectly. It went exactly how I wanted it to go and I was confident from the start, knowing I was in reasonable shape.

“The last lap was frustrating, once they were gone they were gone and on this sort of course there is no way of catching them. I wish I could have stayed with them but I lost a bit of concentration and that’s all it takes. I’m happy with the bronze medal and hopefully there will be many more to come.”

Harriet says goodbye to the junior ranks in style

Britain’s only individual gold medallist came in the form of Knowles-Jones, whose under-20 women’s race got an action-packed day under way.

This was the Warrington athlete’s final event as a junior athlete and she could not have bowed out in better fashion, adding to the European silver and bronze medals she already had to her name.

For Knowles-Jones in particular it was a day to remember.

“My mum was crying as I crossed the line, as I was almost crying, it’s an amazing feeling,” said the team trials winner, whose mother Jayne (nee Spark) is a former British 1500m champion and competed for Britain at the 1994 World Cross Country Championships. “I was chuffed for her to see it, she comes out to pretty much every race.

“It’s been such a mad season, and I have been really nervous about this as it’s my last chance to get that gold as a junior so I can’t believe I did it. It means so much to me and it’s brilliant for the whole team to win the team gold too. It just makes for the perfect day.

“I’ve completed the set (of medals) so I can’t ask for any more.”

Norway’s Jakob Ingebrigtsen took gold again in the men’s under-20 event, producing a controlled and emphatic finish to clock 18:39 and defeat Ramazon Barbaros of Turkey (18:41) and Louis Gilavert of France (18:45) over 6.28km.

Matt Willis was the best-placed Briton in 14th as the team finished in 6th postion overall.

Under-23 teams in the medals

There was no individual gold but, in the under-23 events, it was the British women’s line-up who again came out on top. The race was won by Germany’s Aline Reh in 20:22 after she denied compatriot Konstanze Klosterhalfen (20:25) a third European title, but Jess Judd ran an excellent race to clinch bronze in 20:45 on the 6.28km course.

The fact that Amy Eloise-Neale and Amy Griffiths were fourth and fifth respectively meant it was a convincing team victory for Britain.

“It was a lonely race out there, I was alone from the start and I wanted to catch the girls ahead but despite closing on every lap I couldn’t quite get to them,” said Judd, with Mhairi MacLennan, Phoebe Law and Philippa Bowden the other gold medallists. “But I held on for third which was my main aim towards the end. This race was a lot harder. Our trials were over 8km and slow and muddy so that was very different from this but I think I am in good shape and I think it showed out there.

“It was incredible to get a three, four, five finish. We didn’t expect to win the team gold and knew that the Germans would be really strong but to get team gold is amazing and I am really proud of the girls.”

Mahamed Mahamed was the best-placed Briton in the men’s under-23 race, coming 12th in a race which stayed tightly bunched for a long time before Frenchman Jimmy Gressier showed the strongest turn of speed in the closing stages to clock 24:35 in beating compatriot Hugo Hay (24:37) and Italy’s Yeman Crippa (24:42) over 8.23km.

Chris Olley, who had led at one point, coming home in 13th and Patrick Dever (16th) made sure of the team bronze for Britain, with Joe Steward, Jack Rowe and Daniel Jarvis the other medallists.

“It was tough but the main thing was that we won the medal,” said Mahamed, an individual under-20 bronze medallist in Chia last year. “On the last lap everyone took over and I struggled to keep up, so it was a learning curve.

“I haven’t found a huge difference stepping up an age group, especially having raced senior men before, but I think the biggest thing is to get that pace on the last lap and that’s what the winner had out there today, coming from behind me to win.”

Finishing on a winning note

The last event of the day was also a first, with the mixed relay a new addition to the event programme, and Britain were convincing winners.

Melissa Courtney got the team off and running, handing over to Cameron Boyek in third just behind Czech Republic and Spain. It was on the second leg where Britain established a lead they would not relinquish, with Sarah McDonald increasing the advantage on the third leg before Tom Marshall, who had been drafted in for the injured Charlie Grice earlier in the week, anchored the side home.

“It’s a fantastic event and really adds to the atmosphere, the race itself and it makes it more spectator-friendly so the fans can watch it and enjoy it,” said Marshall.

“By the time it got to Sarah I knew we had this as we were so far away ahead and the team had done a phenomenal job. The nerves had calmed down by that point.

“I wanted to win this so badly. Coming back up that home straight, there was no way I was going to let anyone past me.”