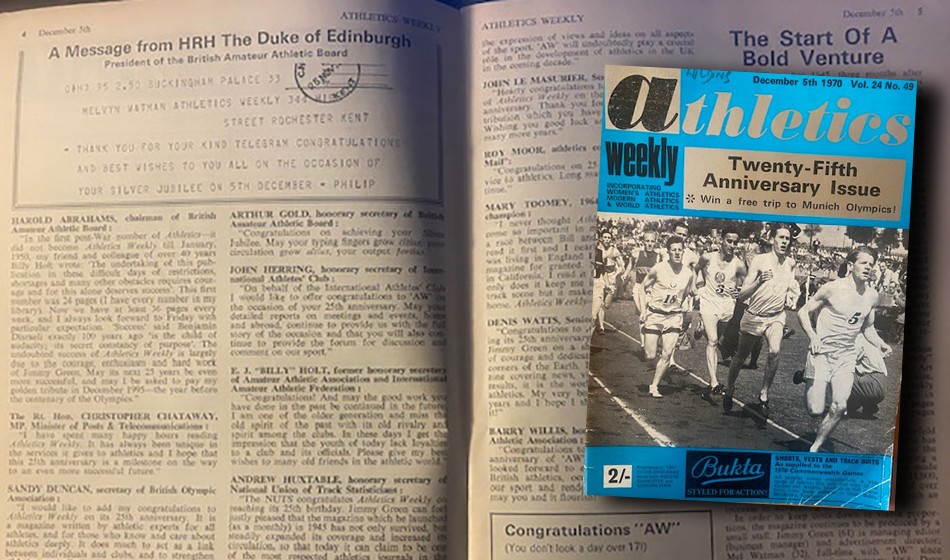 As AW celebrates its 75th anniversary, the magazine’s results guru Steve Smythe takes a look back at another milestone edition

I started getting Athletics Weekly at the end of November 1970, at the age of 12. The second magazine I ever received was the 25th anniversary issue on December 5, which probably as a schoolboy with just over a year’s athletic background, I did not fully appreciate at the time.

As it was the silver jubilee, it had a slight silvery coat and the cover shot was Chris Chataway leading Roger Bannister and Gordon Pirie – three of Britain’s greatest runners.

The third page confirmed the founding editor Jimmy Green was still managing editor, while Mel Watman was the editor and Dave Cocksedge his editorial assistant. The audited circulation was 11,330 and it had readers in 59 countries.

The fifth page included congratulatory messages with the most striking being a telegram from the HRH The Duke of Edinburgh, who was then the president of the British Amateur Athletic Board (BAAB).

Others to offer their congratulations included Chataway (then the Minister of Posts and Telecommunications) and Mary Rand (then Toomey) who said: “Now living in California, I read it from cover to cover … it keeps me in touch with the sport and I feel closer to home.”

The sixth page confirmed it was the 1143rd issue published and that at that time there had been approximately 8 million sales which at the same rate over the past 50 years means it should now be over 3000 magazines and well over 20 million sales!

Page 7 gave a list of Britain’s international match record from 1945 to 1970. Back in this period the staple diet of international athletics was the two or three-a side match in all events with around three a year in most seasons.

Hammer thrower Howard Payne with 121 points in 37 matches was the best individual scorer at one event but Susan Allday with 77 in the shot and 80 in the discus also stands out.

The most common match was against France with Britain coming out on top 11-7 but the women’s score was 12-0 in Britain’s favour.

From Page 9 to Page 16 they reprinted some articles from the first few months of 1946 including a feature by the 1924 Olympic 100m champion Harold Abrahams comparing the 1935 and 1945 world records.

It also includes a superb feature on Sydney Wooderson from the January 1946 issue.

From Page 17 to 20 there is a list of all 166 Britons who won medals or set world records and their achievements.

The centrepiece of a brilliant issue is Watman’s feature between pages 21 and 28 on London’s White City stadium whose use as Britain’s main athletics venue came to an end in 1970 with the AAA Championships. 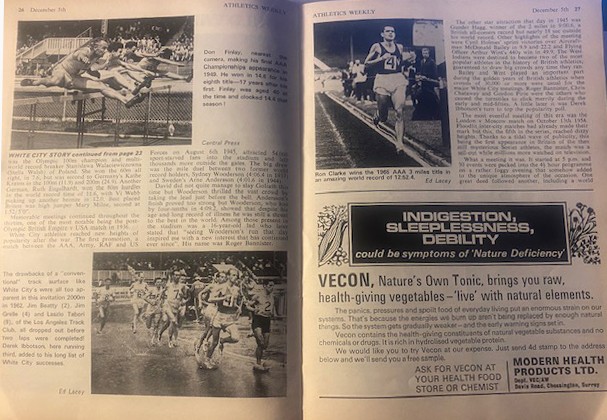 Between this article is a photo quiz with the winner promised a free trip with the AW party to the Munich Olympics!

It was a generous prize but the cost was less than you probably imagined.

An air trip going out on August 25 and staying in the Bavarian Alps before the start of the athletics and returning on September 11 was all of £78 for all travel and accommodation, while the coach trip was 51 guineas!

Such was the importance of the AAA and WAAA Championships that many events were often dominated by overseas competitors.

It sometimes meant that you might have to wait until sixth place for the first British athlete and this happened in the 1963 880 yards and 1958 triple jump.

Therefore AW listed the uncrowned British champions between 1946 and 1970. A more detailed article on this appears in the AW Clubhouse here, available to AW subscribers, together with an article on ‘my most memorable moment’ in which a number of names pick out their greatest race or performance from the previous 25 years.

Stan Eldon, who was double British champion at three and six miles in 1958, had an advert for Stan Eldon Sports in the magazine. Among the items on offer were tracksters (lightweight trousers) at two for 30 shillings (£1.50 these days), Kingswell cross country studs for 54 shillings (£2.70) and Danish nylon track suits for just over £5. Eldon later became a highly successful race organiser for the Reading Half Marathon.

Because of the vast amount of fascinating historical information, there is a relative lack of results. However, there are some that stand out.

The Gloucestershire League results show that future double Olympic steeplechaser Tony Staynings won the youth race, 16 seconds ahead of Nigel Gates, who went on to become one of Britain’s greatest ever masters and he is still setting records and winning titles among the current M65s.

The Greater Women’s League at Welwyn Garden City was won by the Commonwealth 1500m champion Rita Ridley from Margaret MacSherry (a future 1972 Olympic 800m runner under her married name of Coomber).

Road race results are also at minimum but there is a report on the Epsom 10 won by Keith Darlow from another top steeplechaser and future race organiser Ron McAndrew, with both on 49:27.

The report is by a current AW contributor Tom Pollak and in sixth place was another long-time contributor Martin Duff (50:47), one place up on top coach Bud Baldaro (50:58).

An advertisement for the Hog’s Back 9.5 mile road race – then one of Britain’s best known races – shows entry cost 4 shillings (20p). One other change – the race took place at 2.50pm on Saturday.

"My main goal is to be too fast for everybody else, which means I can do what I want and still win."

Watch our exclusive interview with Jakob Ingebrigtsen from our April issue as we sat down with the Norwegian.