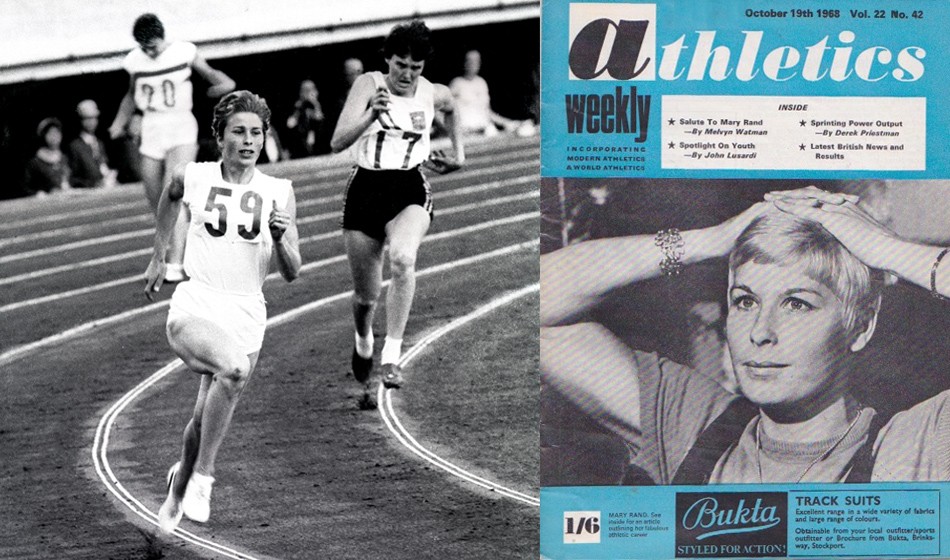 The original ‘golden girl’ of British athletics turns 80 today and Mel Watman, who was in Tokyo to report for AW on her 1964 Olympic long jump triumph, looks back on her dazzling career

High jumper Dorothy Odam (Tyler) in 1936 and hurdler Maureen Gardner (Dyson) in 1948 came so very close, but the distinction of becoming Britain’s first female Olympic athletics champion fell to Mary Rand in Tokyo in 1964. What’s more, she broke the world record in the process … and went on to win a silver medal in the pentathlon and bronze as a member of the 4x100m team!

When I interviewed her at her home in Henley-on-Thames just before the Games she told me: “The greatest thing of all would be to do a world record at the Olympics – like Herb Elliott, for instance. That would be wonderful.”

Twenty-three days later her hopes and dreams became a reality.

Born in Wells, Somerset, on February 10, 1940, Mary Bignal, as she was then, first attracted attention while a sports scholarship pupil at Millfield School.

Many successes followed, including British records and a Commonwealth long jump medal, and by the time of the 1960 Olympics she was being talked of as a possible long jump gold medallist. In Rome she led the qualifiers with a UK record 6.33m, only to wind up ninth in the final later that day with 6.01m. The gold medal went at 6.37m, the silver at 6.27m. The problem was that Rand fouled her first two jumps.

Her confidence shattered, she measured out her run-up anew but it was of little avail and she failed to qualify for another three jumps.

In 1962, only four months after the birth of her first daughter Alison, Rand made a remarkable comeback to earn the bronze medal in the European long jump championship. She enjoyed a glorious season in 1963, which included a world record (alongside Madeleine Weston, Daphne Arden and Dorothy Hyman) of 45.2 for the 4x110y relay, a 6.44m long jump (the official world record by then was 6.53m by Tatyana Shchelkanova of the USSR), a British 80m hurdles record of 10.8 and further UK records in the pentathlon of 4712 and 4726.

Her annus mirabilis, however, was 1964. She hardly put a foot wrong all summer, which began with a 4847 score in the Somerset pentathlon championship back at Millfield School. The downhill track and other irregularities ruled it out as a UK record but it was a great morale booster. In June she claimed back the record she had lost to Mary Peters three weeks earlier by scoring 4815, while in July she not only won the WAAA long jump with UK record leaps of 6.53m and 6.58m but also tied the European 100y record of 10.6. She was in fantastic form for her final pre-Olympic appearance, in Portsmouth.

Admittedly, the following wind was way over the limit at 4.0m/sec but she had some six inches (16cm) to spare on the board as she matched Shchelkanova’s world record of 6.70m.

After leading the qualifiers with an Olympic record of 6.52m, Rand opened with a UK record of 6.59m, consolidated with leaps of 6.56m and 6.57m, improved to 6.63m and then, in the fifth round, produced that extraordinary jump of 6.76m. As her coach John Le Masurier was to write: “Technically it was superb – a fast approach, with the body becoming vertical as she crouched into a powerful take-off. A perfect hitchkick with the feet stretched forward together for landing and just sufficient forward speed remaining to allow her to stand up in the sand.” 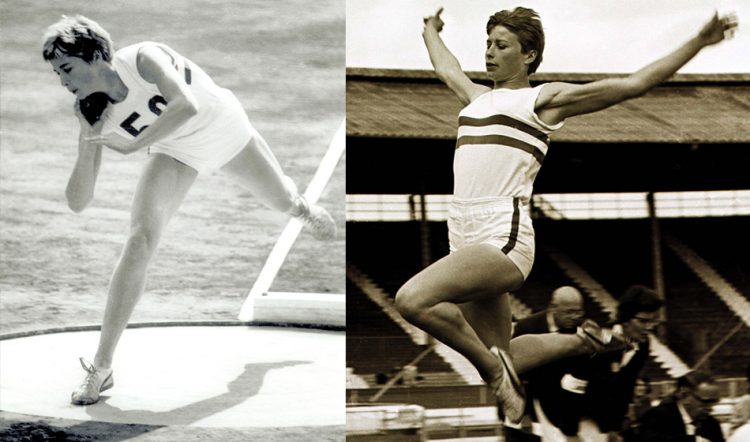 It was a performance ahead of its time, for there was a headwind of 1.6m and the clay runway was rainsoaked. Off a synthetic surface and with that amount of wind in her favour it’s possible she would have jumped very close to seven metres – the sort of distance that would not be attained for another dozen years.

However, she lost so many points to Press in the shot – no fewer than 384 – that the muscular Soviet athlete ran out the winner 211 points clear with a record-breaking score of 5246.

Rand’s film star looks and sunny personality combined with her Olympic triumph made her truly the “golden girl” of British athletics. She was voted BBC sports personality of the year for 1964 and was awarded the MBE.

Ann Packer (Brightwell), who won her 800m gold medal in Tokyo a few days after Rand, summed up what many believe. “Mary was the most gifted athlete I ever saw. She was as good as athletes get; there has never been anything like her since. And I don’t believe there ever will be.”

» This is an abridged version of a three-page feature published in the February 6 edition of AW magazine, which is available digitally here or to order in print here

Everything you need to know about this weekend's Liverpool Cross Challenge and British trials for the Euro Cross. https://athleticsweekly.com/event-news/jess-warner-judd-and-marc-scott-lead-liverpool-line-ups-1039963031/