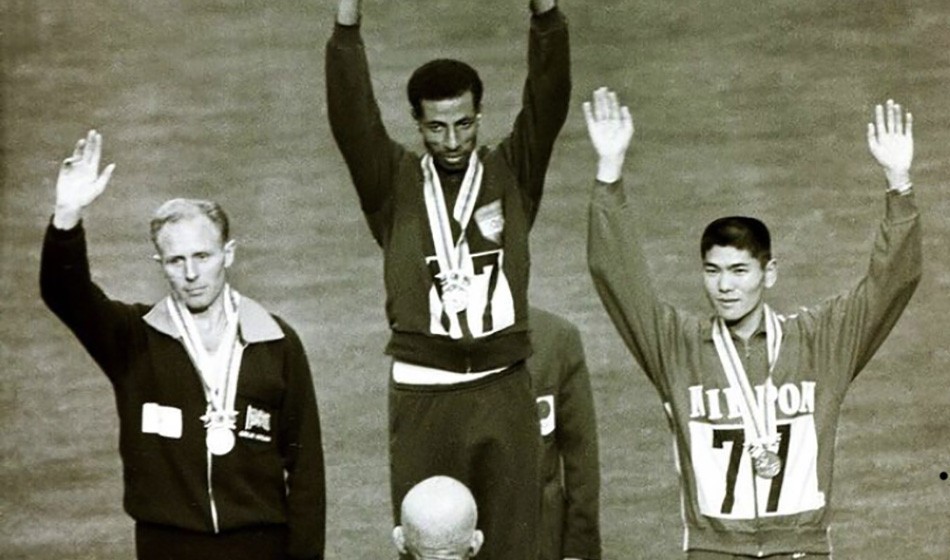 The Coventry Godiva legend broke Buddy Edelen’s world marathon mark by half a minute with 2:13:55 at the Polytechnic Marathon in June 1964, but he was perhaps best known for his podium place at the Tokyo Games a few months later.

There he finished runner-up to Bikila as the great Ethiopian successfully defended the title he won barefoot in Rome in 1960. In the battle for silver, host nation hope Kokichi Tsuburaya came into the stadium in second place but Heatley, who had been plagued by a stitch for much of the race, sprinted past the Japanese runner in the final 200m to clock 2:16.19. (Heatley, Bikila and Tsuburaya are pictured on the image above, left to right, on the podium).

Sadly, Heatley went on to out-live his rivals from the marathon at the Tokyo Games by almost half a century with Bikila dying in 1973 aged 41 from a brain haemorrhage following a road accident and Tsuburaya tragically committing suicide in 1968 when he realised that injury was ruining his Mexico Olympic chances.

Heatley later described himself as the “villain” for passing Tsuburaya in the final stages of the marathon in Tokyo, but the Japanese running fraternity bore no grudge and in 2014 Heatley and his wife Gill visited the city on the 50th anniversary of the Games and had an emotional meeting with relatives of both Tsuburaya and Bikila.

Heatley became arguably better known in Japan than his native Britain for his part in the historic Olympic marathon in 1964. Yet he was a brilliant runner outside the marathon and felt he was more suited to cross-country and winter races than summer marathons on the road.

Heatley set a world record for 10 miles with 47:47 to beat his hero Emil Zatopek’s mark. On his favourite surface he won the English ‘National’ cross country title three times in the early 1960s and in 1961 triumphed in the 1961 International Cross Country Championship – the forerunner of the World Cross – by 23 seconds in Nantes, France, to beat, among others, Gaston Roelants of Belgium.

Despite running shoe technology being in its infancy, Heatley told AW in a 2016 interview that he ran 120-125 miles per week self-coached “when mileage mattered” and raced around 50 times each year. As for the prospect of a two-hour marathon one day, he said: “why not?”

Ironically, Heatley has died with the 2020 Tokyo Olympics due to start in almost exactly one year’s time. Like other Olympians from 1964 he would have loved to have gone to the Games next year, but at least had the consolation of returning to Tokyo in 2014 for one final run down memory lane.