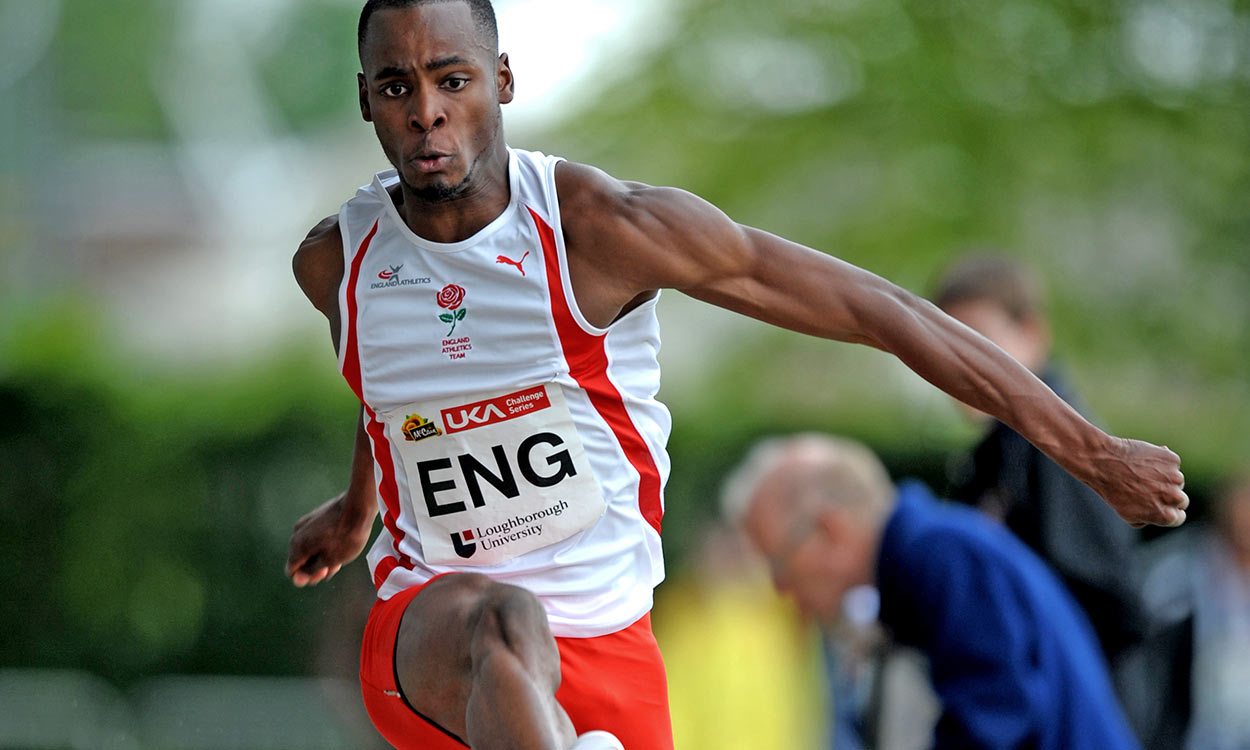 Of all athletics events, the triple jump is widely acknowledged by sports scientists as one of the most physically demanding.

Research at the University of Iowa a few years ago showed that, at the landing between the hop and step phases, the force exerted by a triple jumper on the ground can be the equivalent of up to 22 times their bodyweight – just about the highest measured force that a human limb is exposed to during any intentional activity.

According to Dr Sam Allen, a lecturer in biomechanics at Loughborough University, that’s the equivalent of an athlete briefly weighing 1.7 tonnes, and having to stand on one leg at that time. Writing on the website theconversation.com last year, Dr Allen explained how published papers have proven triple jumpers develop unusually thick thigh and shin bones to enable them to withstand the force of the event.

But the event is as technically demanding as it is physically and errors in posture or execution can cost an athlete dearly.

“Physics dictates that the higher in the air an athlete travels, the further they will jump – provided they don’t sacrifice their speed,” said Dr Allen. “So, the athlete needs to carefully balance the speed and the height of their jump, in order to perform really well. Because of this, technique is an extremely important aspect of the triple jump.”

Add the mental fortitude that is required to come down the track at 9.5-10.5 metres per second, then to take off and land on the same leg and it becomes evident that bravery is essential to take up this event. So what does it take to perfect the stages of this most challenging event?

» Speed is crucial. Dr Allen reported that the fastest athletes in the men’s and women’s events will hit the take off board at around 10.5 and 9.5 metres per second respectively. These speeds are similar to those that will be seen in the long jump finals.

A full length run up for high level athletes will typically be between 16 and 20 strides and the ultimate aim is to be at optimal speed and a good take off position at the board.

» There are numerous ways to set up your run-up, the most consistent seen at elite level among world class athletes is set up in three phases:

1. The Set Up: this is usually 6-8 strides in duration starting off low with long, patient strides whilst gradually rising.

2. The Middle Phase: this entails the athlete running tall with high knees and gathering momentum all the time

3. The Attack: this phase of the run-up consists of 3-5 strides that are shorter and with increased speed to allow for an optimal take off

The hop phase is a key factor in determining the final distance of a triple jump. A study in the Journal of Biomechanics calculated that the longest hop phase in a triple jump measured prior to the research in 1993 was 7.02m by Kenny Harrison of the USA – far enough to win most international competitions, yet performed in the middle of a 3-phase movement.

So how to perfect this phase? Compared to a long jump take-off, the triple jump is significantly a lot flatter. You will often hear coaches initially teach athletes to “run off the board”. In my opinion, Jonathan Edwards is probably the best example of someone who perfected this phase.

What happens after the take off is where it becomes tricky. The knee of the free (non take-off) leg punches through to around a 90 degree angle, before straightening and slowly pulling back. At the same time, the take off leg comes through slowly in a cycle motion to replace the free leg at the front. This avoids over rotation and slows down motion in the air.

This is the point at which the force of 8-22 times your own weight is exerted on your joints and the rest of your body. It’s crucial as it is often the point that determines a good/average from a poor jump. The less momentum and speed you lose through the landings, the better your overall distance. The key to this is landing the hop in the best position – one that is close to the body. By this, I mean your hop leg gets closer to your body from in front and your free leg also gets closer to the body, ready to drive the knee forward into the step. Clean and aggressive landings are key to maintaining speed and propelling the body into the step position. Landing further out from the body (blocking) causes loss of momentum.

Typically, this is the smallest in distance and Dr Allan estimates it makes up “around 30% of the total distance” of a triple jump.

Keeping balance and preparing for the jump phase is paramount for a good jump. Again the free leg knee is punched through to around 90 degrees and the arms are moved back slowly behind the body to punch through aggressively for the final phase. An aggressive pull back action on the step landing will encourage a good final take off.

Aside from the step phase, most athletes distribute their efforts evenly in the hop and jump. “It’s what’s called a balanced technique – or they choose a hop or jump-dominant technique, where one of these phases is substantially  longer than the other,” said Dr Allen.

In his own studies at Loughborough, published last year in the journal Human Movement Science, Allen showed that “balanced or hop-dominant techniques may be optimal.” However, he cites the case of the current men’s Olympic champion Christian Taylor – who came very close to beating Jonathan Edwards’ world record last year – as typically using a jump-dominant technique which underpins its importance. Similar to a long jump take off, you tend to see athletes punch their free leg with arms punched from behind through and up to create a hang technique before going into a leg shoot.

» Kola Adedoyin is a two-time national indoor champion and a world junior finalist in the triple jump with a 16.61m PB. Currently coached by former Commonwealth champion Tosin Oke, he is aiming to qualify for the next Olympics. Follow him on Twitter and Instagram: @KolzTJ