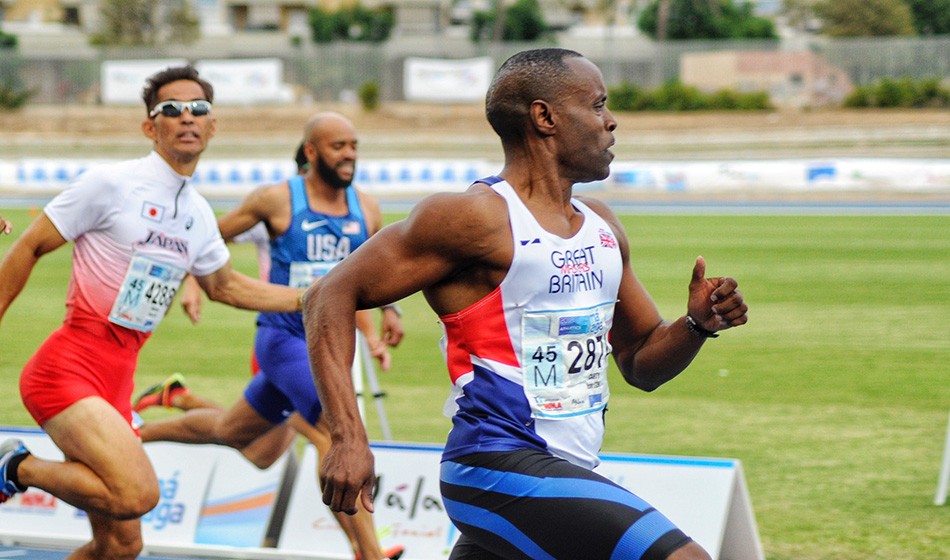 Aged 49, Jason Carty (pictured) came back from the World Masters Indoor Championships in Torun with a gold in the M45 60m in a British record of 7.01. He ran a PB to show that he was in prime condition. Yet only a few years earlier he had cancer and had half his lower lobe removed.

There are a number of other athletes of all ages who have suffered from cancer, such as Jamaican 400m runner Novlene Williams-Mills, who had breast cancer, plus sportsmen and sportswomen across a spectrum of other sports, such as tennis player Martina Navratilova – and here we look at the topic in depth.

Tom Cowan: A small survey by Macmillan Cancer Support and YouGov in 2012 found only 23% of cancer patients surveyed had been advised by their oncologist about the importance of being physically active during or after cancer treatment. There is a growing body of evidence of the physiological and psychological benefits of exercise both during treatment and post-treatment.

A research review from 2017 suggested that following cancer diagnosis, superior levels of exercise were associated with a 28-44% reduced risk of cancer-specific mortality, 21-35% lower risk of cancer recurrence and a 25-48% decreased risk of all-cause mortality.

The benefits of exercise for cancer patients also include managing side-effects of treatment, such as reducing cancer-related fatigue, improving body composition by maintaining muscle mass through performing strength training, maintaining a healthy weight and improving sleep.

Exercise also improves metabolic health and emerging evidence suggests that it may target the specific Warburg-type highly glycolytic metabolism of tumour cells and may play a part in controlling tumour growth by reducing insulin-like growth factors (IGF) and inflammatory markers.

Moderate levels of exercise can also optimise immune function, which is of particular importance for cancer patients undergoing treatments such as chemotherapy, which can compromise their immune system.

It is also thought that exercise may improve the efficacy of cancer treatments such as chemotherapy drugs, through a possible improvement in their transport to cancer cells.

An improved level of fitness is associated with a reduced length of hospital stay and shorter recovery time. Exercise is also important in terms of improving cardiovascular health and fitness of cancer patients, as some cancer treatments can cause cardiotoxicity, having negative implications on the patient’s cardiovascular function. In fact in men with prostate cancer, cardiovascular disease is the leading cause of death.

Performing strength training and some weight-bearing exercise can help to improve bone mineral density and bone strength, which may be reduced by hormone therapy. Regularly performing flexibility exercises can help patients to quickly regain their range of motion after surgery.

There are also a multitude of psychological benefits, including a reduced risk of depression, improved quality of life and the feeling of having something that is within the patient’s control when the rest of their course of treatment is likely to be managed by their oncologist.

AW: Are certain cancers known to respond to exercise more than others?

TC: The majority of cancer research and exercise to date has focused on breast cancer and as a result it is in this population that some of the benefits of exercise on cancer are best evidenced. Colorectal and prostate cancer have also been widely studied and there is growing evidence of the benefits of exercise across a range of different cancer types. Further research is required but more and more studies continue to emerge in the field.

Jason Carty had lung cancer but has run faster than ever at 49. He’s world masters champion at 60m and 100m.

“I had my left lower lobe taken out as I had lung cancer and it kind of changed everything, especially my running, and my life had to change dramatically. I was diagnosed in April 2016 and by July they whipped me in and took the lower lobe out.

“I trained six weeks later (after the operation – Ed), I was advised not to but for me I thought it would be more therapeutic than sitting inside and doing nothing and it seemed to work in the end.”

AW: Which forms of exercise are recommended and how can a patient monitor their reaction to exercise?

It’s crucial that the volume and intensity of training are adapted for each individual according to their current health and fitness status, cancer treatment and side effects.

For example, patients undergoing chemotherapy are likely to have fluctuating levels of fatigue dependent on which stage they are at within their chemotherapy cycle and the exercise programme should reflect this, with lower intensity and volume on days when fatigue is high and relatively more workload on days when fatigue is lower and energy levels are higher. If a patient is unable to meet the 150-minute target, then it is recommended for them to be as physically active as possible, performing exercise little and often and avoiding inactivity.

AW: What effects do anti-cancer drugs/treatments have?

TC: Chemotherapy is the use of chemical agents that kill cells that are in the process of dividing. Another common form of cancer treatment is hormone therapy, which works to try to keep hormone-sensitive cancers, such as some breast, prostate and ovarian cancers under control by reducing the level of hormones in the body or by blocking the hormones which make cancer cells grow and divide.

Anti-angiogenesis drugs work by preventing tumours from creating their own blood vessels, sometimes through blocking a protein called vascular endothelial growth factor (VEGF). This limits tumour growth, restricting it to a size of about 1-2mm. PARP inhibitors are another form of cancer treatment that has typically been used in cancer patients with faulty BRCA genes. PARP inhibitors stop the PARP protein from repairing damage within a cancer cell, which means that the cancer cell dies.

AW: What about steroidal treatments?

TC: Rather than anabolic steroids, which are known to have performance enhancing capabilities, corticosteroids are usually used to treat cancer and help with the side-effects of treatment, such as reducing sickness. This may make patients feel a bit better in the days following chemotherapy, which may lead to an improvement in exercise performance. However, side effects of steroids include oedema, a build up of fluid leading to swelling of the hands and feet, and increased appetite, which may lead to overeating and weight gain. Possible but less common side effects of steroid treatment include muscle wasting and bone thinning, which both impact negatively on exercise performance.

AW: What about diet, can this off-set cancer symptoms and assist cure?

TC: Many nutritional strategies for cancer patients are novel and without the backing of large randomised controlled trials but what we do know is that all cancer patients should optimise their weight and body composition during and after treatment, since these factors have an effect on the patient’s outcome.

Muscle mass maintenance and development can be encouraged through adequate protein consumption during the day and around exercise and training. Keeping to a healthy body weight and not becoming overweight/obese has been shown to be important, for example, for prostate cancer patients, who may have a reduced risk of suffering from incontinence after a prostatectomy if they are of a healthy weight. There is also good evidence that being overweight increases the risk of developing aggressive or advanced prostate cancer.

Being a healthy weight has also been suggested to improve the effectiveness of some cancer treatments, such as hormone therapy. However, the need to decrease body fat varies by cancer type. Oesophageal, head, neck and gastric cancer patients may
be underweight and may lose more weight during treatment so dietary focus for these patients may need to be placed around increasing weight.

Patients should aim to follow a healthy diet but should be aware that it may be necessary to adapt their diet due to some of the side-effects of treatment that can include changes in taste and diarrhoea. Certain dietary habits can place individuals at an increased risk of developing certain forms of cancer, such as insufficient fibre intake as well as consuming too much red and processed meat, with both linked to an increased risk in developing bowel cancer.

It is also suggested beneficial for patients undergoing radiotherapy and chemotherapy to limit their intake of antioxidants, as they can reduce the effectiveness of the treatments. There are some emerging studies suggesting that intermittent fasting could decrease cancer growth rates.

» Tom Cowan is a clinical services manager and physiologist at The Centre for Health & Human Performance. See chhp.com