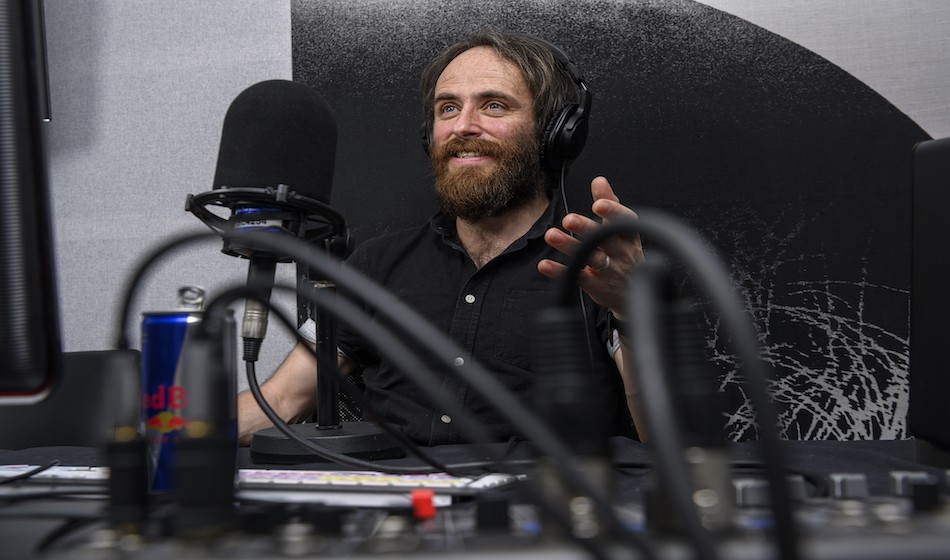 Rob Pope on hosting Red Bull’s ‘How To Be Superhuman’ podcast, replicating Forrest Gump’s run across America and his love for ultra running

The first thing you notice about Rob Pope is his beard. You’re not surprised to hear that the ultra runner didn’t shave it for 18 months out in America, synonymous with a heavy rocker on their music tour. The only difference is Pope ran all of the 15,700 miles, the equivalent of 600 marathons.

He now hosts Red Bull’s ‘How To Be Superhuman Podcast’ and the first episode of the second series is with mountaineer and distance runner Kilian Jornet – a previous cover star of AW.

“I just have to recover in between each of these episodes as they take more out of me than the Gump run did,” Pope tells AW. “If you don’t know much about Kilian [Jornet] I don’t know where you’ve been hiding and you can definitely tell he’s had the engine to go up on Everest twice.”

Pope has already chatted with Molly Hughes, the youngest woman to scale both sides of Everest; Yusra Mardini, who tugged a sinking boat of refugees to safety; Gabriel Cordell, who rolled across America in a standard wheelchair, to name a few.

“The whole theme of it is being superhuman but these people were anything but superhuman in the way they acted,” Pope says. “They were just people and I was almost weirded out being in that company but they were just so nice and the best ones are when they let their guard down.”

Pope’s background means he can relate to those on the podcast.

In 2002, shortly after he had run the Virgin Money London Marathon, his mum died of cancer. She had brought Pope up as a single parent from six months old and created an atmosphere of optimism and mental strength for the ultra runner.

“She was a fierce warrior queen of a woman. We once went on Kilroy, the old chat show, and the main theme was single parent families being responsible for most of Britain’s ills. I was 17 at the time and I just got the nod that I was going to university. My mum tore the MP [Robert Kilroy-Silk] a new one and said that I went to vet school and that single parent families can do anything,” Pope explains.

“She ended up getting mouth cancer and had her whole lower jaw removed and rebuilt from bone from a leg and muscle from a stomach. She beat it, went back to study law at Liverpool St John’s University, came top in her first year and was half-way through second year when I was doing the marathon and was white as a sheet. The last photo I’ve got of her was at my graduation in July and she passed in September.”

Pope worked as an emergency vet and then went back to do a PhD before an opportunity to move out to Australia arose in 2013, where he continued his love for running and joined the prestigious Western Athletics Club in Melbourne, which heralds alumni such as 400/800m specialist Morgan Mitchell and fellow distance runner Jack Rayner.

In 2015, he competed in the Sydney marathon and represented Victoria. After finishing 10th, Athletics Australia approached him and asked if he’d switch nationality to represent Australia at the Rio Olympics if the other people couldn’t get the qualifying times.

“Of course, I was up for that, but three or four ran faster than me! I’m thinking of getting an Olympic ring tattoo where I only get two or three out of the five rings,” Pope adds.

After spending time out in Australia and experiencing the sweltering summers, Pope moved back to the UK and continued his work as an emergency vet. In 2016, he quit his job and acted upon a book he had read by Nick Baldock called ‘Running Across America’.

“The book just conjured so many pictures of America and obviously when you talk about running in America people were going to throw that Forrest Gump line at you. When I emailed him the headline of the email was ‘Forrest Gump 2’ but I just wanted to go from Long Beach in California to Long Beach in New York and call it the Long Run Home in a massive feat of inventive naming,” Pope says.

“It was only when you started looking at the route you wondered which route did Forrest go through? There were a few estimates, one of them well researched of 15,248 miles and another was higher but geographically inaccurate, and another one which was 13,889, which at one point on the run when the wheels were coming off seemed like a very attractive proposition to go down. The 15,248 miles was the goal for me though.” 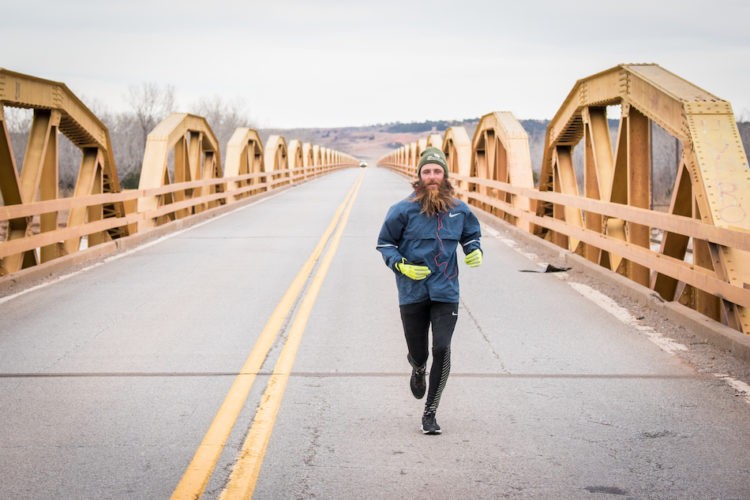 Pope received support from then girlfriend, now wife Nadine but after designing a leaflet to gauge interest from potential sponsors, he received just three replies out of 100. “You can sense only one of them had even read it,” he explains.

The whole trip cost the ultra runner approximately £50k, including £35k of his own money that he and Nadine had saved up in Australia for a mortgage on a house. During the trip he set-up a JustGiving page and received roughly £8k while he collected between £2 and 3k from people he just met a long on the run. While the financial side caused Pope more pain on occasions than the physical and mental challenge, it was never about the money.

“I wasn’t bitter about the money side of things as I don’t think anyone owed me anything. It’s a case of it would’ve made life easier. You’ve got the constant physical worry and then the mental side of it so the financial thing, which was the overall stress, was the killer and I did devote a lot of my time trying to get across the Forrest run,” Pope tells AW.

“Like in the film, I just ran because I just felt it and I also was running for women’s rights, the homeless, the environment and world peace. My two charities were WWF and Peace Direct.”

So in September 2017, he made the pilgrimage to Mobile, Alabama and started the long trek across America. For overnight stays, he and Nadine had bought a camper van they were looking to sell off at the end of the trip. The first leg took Pope from Alabama all the way to Santa Monica, a distance of just over 2000 miles. Like in the film, he listened to just U2.

“My first turn at Santa Monica was at the pier where Forrest realised he’d ran so far he might as well keep on going. I ran through Death Valley, past the Badwater Basin and through the top end of Texas,” he says.

The second leg saw Pope make the remarkable trip from California to Maine and on the way he still had time to run the Boston Marathon.

“My original plan was to run to the start line but I tore a quad going through Arkansas and we did the marathon dressed in full Forrest Gump. I then went back again and did it solo,” Pope adds.

Due to visa issues, the ultra runner couldn’t do the entire trip in one go and once he got to Chicago he flew back to the UK to refresh it. Here, his whole trip took a turn when Nadine announced to him that she was pregnant. Inspired by the prospect of being a dad, he took on the arduous trip across the more rural north part of America, from Boston to San Francisco.

“I thought Portland was going to be this huge affluent city but I ran down a cycle path and it was like a homeless village. You’re thinking if it can happen here then it can happen anywhere and that put things into perspective. I did feel like I was running through history, past the Watergate building and the reflecting pool. It felt like I was running through someone’s life and that was surreal,” he says. 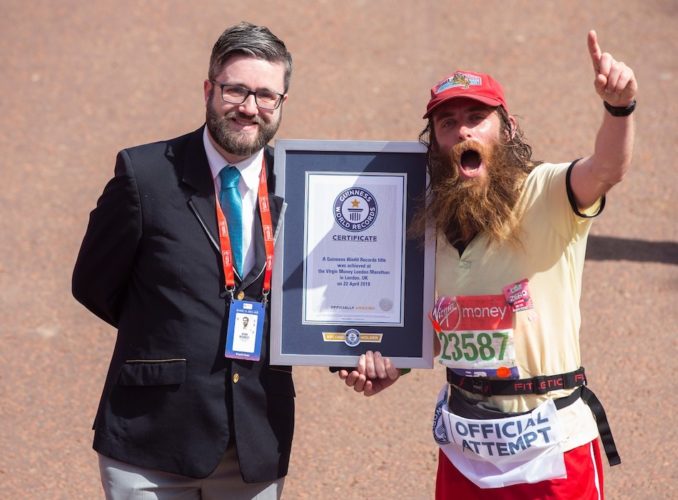 Next year, Oregon host the World Athletics Championships and the chance to run a few laps of Hayward Field on his journey was too good of an opportunity for Pope to turn down. He also took part in the Prefontaine Classic; a race in memory of long-distance running legend Steve Prefontaine.

“The organisers found out what I was doing, reached out to me and put me up in a hotel. I got to meet Linda Prefontaine – sister of Steve – and then met John Truax – Footwear Marketing Director at Nike – who said to me, ‘Why haven’t we heard of you?’ At least I didn’t have to worry about shoes or kit anymore! I did the race and then became Oregon state champion,” Pope says.

As he approached San Francisco, the financial realities of the trip hit and the money had almost gone. With Nadine back in the UK, his friend Olivia took up the reigns but on the next leg of the journey she crashed in Nevada. Pope went alone on the penultimate leg which saw him sleep in churches, trailers and tents.

“Wyoming was 8000 feet and it the second most least populated state after Alaska. It was a 45- mile gap between towns and I could run along the motorways, even though I did get honks off truckers! It was so cold, man. I couldn’t bend fingers from packing up tent in morning. It was about minus 18 degrees,” he explains.

“I got to run along the salt flats which was amazing and that was the longest period without a single amenity, no water, nothing, for about 70 miles. I didn’t feel much jeopardy. If I was about to die, I always thought I could go and flag someone over at the interstate. It was quite good to get that isolation.”

After endless months of running across America, Pope neared the completion of his mammoth journey. Another west to east trip commenced before he turned back round to the finish at Monument Valley in Utah.

“I never said I was going to give up for financial reasons going into the last few legs. Yet, at that point, it was the physical challenge which was the toughest. I pulled my groin making a connection at JFK Airport and then pretty much dragged myself to Alabama but this local family looked after me and they gave me two shots of steroids in my butt,” he says.

“I was feeling pretty miserable but the reason was that Nadine wasn’t going to be there. I was sad that my daughter wasn’t going to be able to see any of it but then I realised that I had the power to change that and so I looked at the calendar and I could get to the finish in time and then come back and see my baby get born.”

That’s exactly what happened. Pope timed it perfectly and on the Navajo Reservation straddling Arizona and Utah he finished with roughly 40 people behind him, like in the movie. He proposed to Nadine at the end of his superhuman 15,700 mile effort and in completing it became the first ever person to complete the Forrest Gump run, the greatest distance anyone from the UK has ever run in a year.

Which only left Pope with one thing to say.

The new season of Red Bull’s How To Be Superhuman podcast is available here.