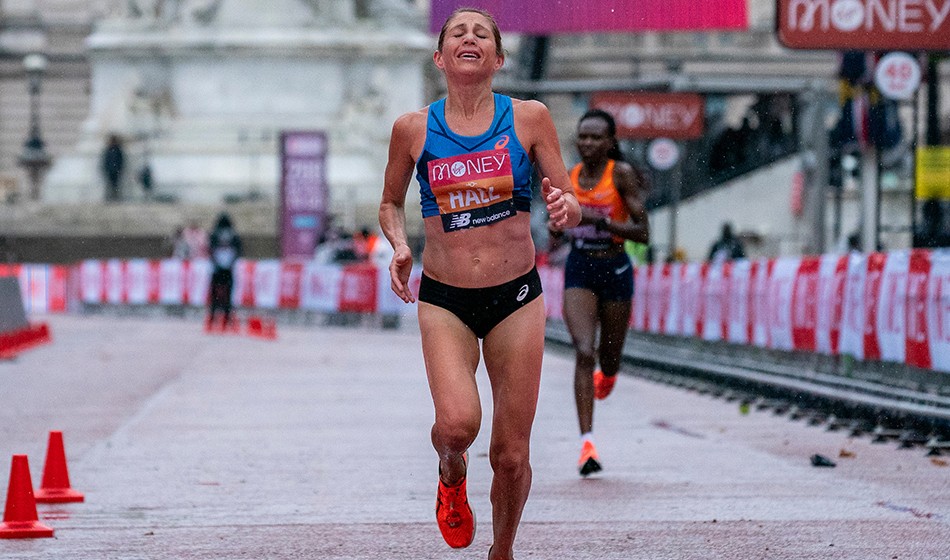 Sara Hall was in third place, some 40 seconds back, when she switched on her “hunting mode” in London.

Racing on a unique 2.15km spectator-free loop course in torrential rain, the American produced a thrilling sprint finish to move past Kenya’s world champion Ruth Chepngetich down The Mall in the closing stages of the Virgin Money London Marathon on Sunday.

Securing second place behind Kenya’s world record-holder and defending champion Brigid Kosgei, Hall stormed to a PB of 2:22:01 in what she described as a “redemptive” run.

Back in February, before coronavirus caused the cancellation of almost all events, the 37-year-old had been racing for a place on the US Olympic team for Tokyo but she struggled on the challenging trials course in Atlanta and did not finish.

Given this, she relished the chance to return to racing in London.

“It was a really surreal moment, for sure,” the American said, reflecting on the final of her 19 laps in the UK capital.

“On the last lap my husband (and coach, Ryan) told me I was about 40 seconds down with still a lot to make up in 1.3 miles. I just kind of went into that hunting mode and was getting closer and closer and really made that last lap fly by.

Sitting next to Kosgei and Chepngetich in the post-race press conference, Hall added: “I have a lot of respect for these women, they are the best in the world. This is a really special moment for me.”

The team places for next year’s Olympic marathon are all already filled following that trial race in Georgia and when asked about the US selection policy, Hall replied: “How we select our teams is definitely different from most countries. It’s really difficult, especially with the curveball of running the trials on the hardest course in history.

“You know, I gave it my all and it wasn’t good enough to make the team. So that was really heart-breaking. But I feel like this moment out here (in London) was really redemptive to me.

“I’ve really grown a lot in my marathon ability so I knew at some point preparation would meet opportunity and today was that day for me.” 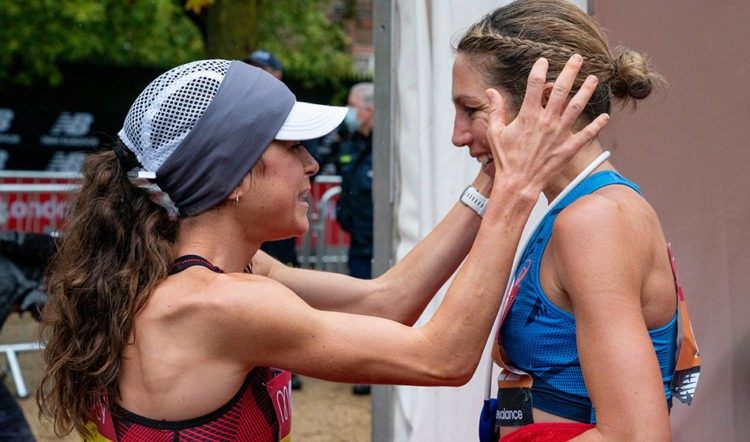 Despite the incredibly wet weather, Hall explained that the toughest aspect for her was the quiet as well as the multiple laps, most of which she completed while running solo.

“I found the biggest challenge out there the monotony of doing so many laps,” she said. “That’s something we’ve never done for a really long race like the marathon and having no crowd. It’s really quiet out there and I ran quite a bit by myself.”

The mother of four children she adopted from Ethiopia in 2015 will now work with coach and husband Ryan, who himself finished fifth in the London Marathon in 2008, to target the track in Tokyo.

“US distance running on the track is better than it has ever been, it’s incredible,” she said. “I haven’t raced on the track since the 2016 trials but I’ve been running some pretty good half-marathons where I have been running the second half of the half-marathon close to the A standard pace for the 10km, so I’m hoping I can put together a good 10km and make a run for that team.

“But it won’t be easy. We have a lot of amazing 10km runners and the 5km, obviously, if you saw the 14:23 (by Shelby Houlihan) this year! I’ll definitely be giving it my best shot.”