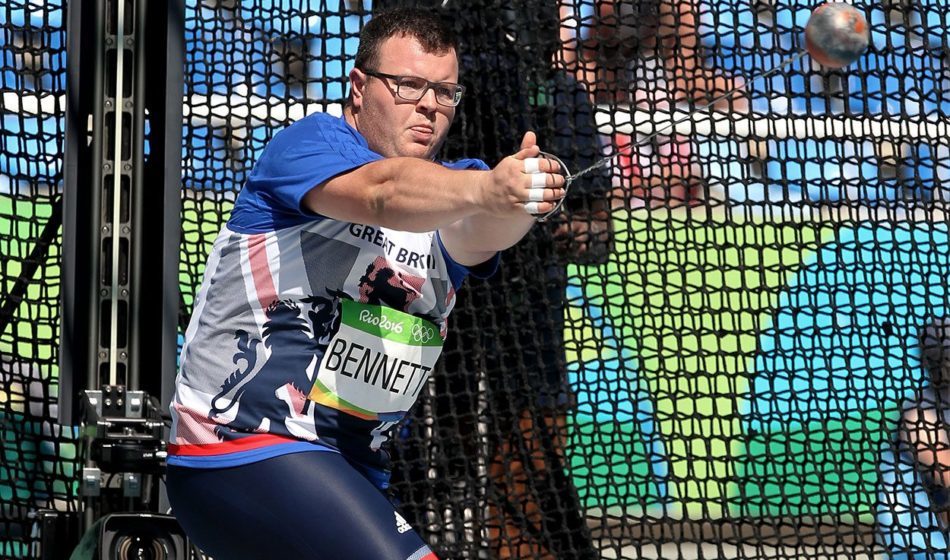 As with most athletes, Chris Bennett has had his fair share of trials over the last 12 months. However, the Scottish hammer thrower, who is gearing up for the new Manchester Invitational later this month, has enjoyed plenty of ups too and believes he is now in the shape of his life.

On the downside, the twice Commonwealth finalist lost his main source of income due to the pandemic restrictions so had to work full-time, he ended up tipping the scales 24kg over his ideal weight and he suffered due to closed training facilities.

However, he has found peace with the weighing scales, had the perfect training build-up this winter, and is eyeing up the Tokyo qualification mark with confidence.

The Glaswegian, who was 19th in qualifying in Rio 2016, in April had one of his best throws since that Olympic year when he went out to 75.69m. He says: “I think there’s more in there. I didn’t expect to throw that far that early, so it’s quite nice. I feel like I’m in better shape than I ever was before Rio, so it’s quite exciting but quite frightening at the same time because the Olympics are just around the corner and it could be special.”

At the start of the first lockdown, Bennett was forced to take a full-time supermarket delivery job when he was unable to do his usual job visiting schools. However, after four months, he decided to switch to part-time and it was around then that he decided he needed to rebuild.

“I think the pandemic’s been good and bad for me in the same way,” he says. “It was bad because I couldn’t really train, but it was good because it’s given me that focus and drive back to do it. I don’t think other people could say that – I think it more went the other way that they maybe fell out of love with the sport with the lack of opportunities, lack of competing, so for me the pandemic’s been a blessing in disguise.”

He says finishing runner-up to Craig Murch at the British Championships last September gave him a further boost: “It gave me the fire to just get back into training, I took a week off and then I’ve just had a clear run at training. I’ve had no real injuries, no disruptions, I’ve been really fortunate so from December to now I’ve not missed a day’s training because of lack of facilities or what not. For me, the consistency has been the big thing.”

Bennett, who has revealed his struggles with mental health, was particularly hard hit when he was disappointed with 10th at the 2018 Commonwealth Games. The Andy Frost-coached athlete says: “I wasn’t really enjoying life, and I really wondered if I wanted to be here. I had some proper deep, dark thoughts.”

He says the recovery period allowed him to rethink his motivations. “It’s taken a  long time to get here, but I feel like I’m back and better than I ever was before, so it’s a nice place to be in at this time of the year,” he says.

The Shaftesbury Barnet Harrier is out to gain the Olympic qualifier of 77.50m rather than having to hope for an invite based on World Athletics’ rankings system.

“For the first time ever I firmly believe I can do an outright qualifying mark,” he says. “I don’t want to leave it in someone else’s hands because if I don’t throw 77.50m and I don’t get picked then I’ve got no one else to blame but myself. If I throw 77.50m and I get top-two at the trials, they’ve got to take me.”

After throwing 75.36m at the European Throwing Cup in Split last weekend, he is looking forward to the new meeting in Manchester on May 27.

We will showcase most of Great Britain’s best throwers on the 27th of May in what is shaping up to be a world class field, as many of them use Manchester as a pit stop on their road to Tokyo! 💪🏻 pic.twitter.com/rbszG97177

The pilot for what could become a World Athletics Continental Tour event has pulled in quality athletes such as Aimee Pratt, Marc Scott and Morgan Lake.

After taking 17 hours to reach Split via three flights, Bennett will enjoy the much shorter journey to the north west of England and says Britain needs more meetings of this calibre.

“We don’t have enough independent, small meets,” he says. “I think you look at all the other countries like Finland, Germany, Sweden, they’ve all got their own individual series, so it’s nice that someone from outside a governing body has wanted to put on a meeting in Manchester of good quality to promote British athletes running jumping, throwing far, especially in Olympic year when it’s even more difficult to try and get competitions.”