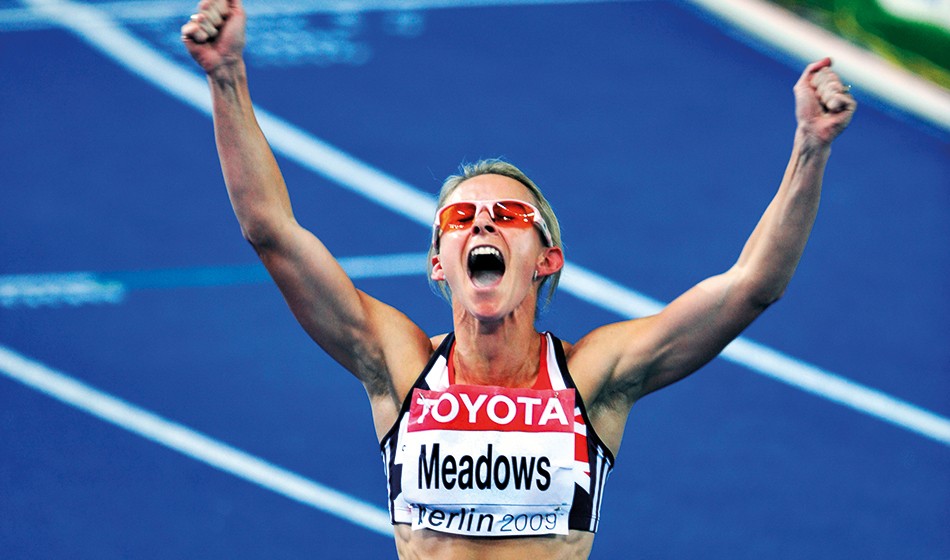 It was my breakthrough race. I think I have actually run better races, even though it was my personal best of 1:57.93. But it was that time where I knew I could really do something, even if other people probably didn’t really expect it.

The final had such a kind of global presence because of Caster Semenya bursting on the scene.

I remember going through the heats, and I’d actually say I felt more nervous for the heat than I did for the semi or the final. We presumed Caster would win it, but I remember looking at the start list, and everybody else was quite beatable.

I had a conversation with Trevor, my husband, and I said, “look at her or her, she’s someone who I beat. Maybe the next week, they might beat me but someone’s going to get a medal here. And it might as well be me.”

I really believed that I could but I didn’t probably vocalise that to anybody else. Before I left my room, I half-scared myself to death. I went into the bathroom, looking at myself, and said “the next time you look at yourself in the mirror back in this room, I hope you really like yourself.”

“I went into the bathroom, looking at myself, and said ‘the next time you look at yourself in the mirror back in this room, I hope you really like yourself'”

It sounds awful … the pressure I put myself under. But I thought “I hope you do yourself justice.”

I just got on the bus and did my kind of usual thing. There’s something about championships when you go through the rounds, and you get to the final and it’s the third time, so it’s familiar.

The big story was Caster. The day before, I was sitting with Trevor and he had something to tell me. He said: “There’s something going on, and I’m not sure if Caster is going to run and they’ve asked her to take a gender test.”

I actually hoped she was in it because I thought it will be a truer race with her included. And that’s kind of the best way for me to run. But it was funny because you could see at the stadium that the other girls were intimidated by her, even though this was her first major final.

I had a South African friend who had told me at the start of the year that she was going to win the world title. I didn’t think it would affect me because I’d become the forever semi-final girl. I looked up her times and they didn’t seem anything special but then she ran 1:56 somewhere and I went “oh, gosh, she is that good.”

I noticed all the personal coaches, national team coaches, everybody watching Caster in the warm-up area, as well as all my opponents. And I really think I was the only one concentrating on what I was trying to do.

That’s one reason I’m proud of that race and show it to young athletes. I stuck to what I was supposed to do. Janeth Jepkosgei hit the bell in 56 seconds. I was seventh but I wasn’t panicking. I told myself “this feels right.”

“I stuck to what I was supposed to do. Janeth Jepkosgei hit the bell in 56 seconds. I was seventh but I wasn’t panicking. I told myself ‘this feels right'”

Down the back straight I was overtaking people, playing chase, picking off one and then another one. I had momentum. Going into the home straight I was fifth. Then I got Mariya Savinova for fourth and Yuliya Krevsun for third.

I didn’t want the line to come because I still needed to get there. I got the bronze but I was three-hundredths of a second away from Jepkosgei and the silver. People will say I timed it amazingly but I definitely had another three-hundredths. I should have probably got the silver.

My immediate thought was “I’m glad I was third and not second.” Because I still didn’t know what was going to happen.

I went off to the first press conference I had ever been at. Everyone wanted to know about Caster. All the questions were directed about Caster. But the IAAF protected her and didn’t let her go to the conference.

It didn’t matter to me. You could have locked me in a room and I’d have been smiling all night, because I knew I was going back to my hotel room to look into that mirror. I hadn’t let myself down.

A few nights later, Usain Bolt broke the 100 metres world record but, apart from that, I was in the race people remember from the championships. I was on the News At Ten. They still talk about Caster Semenya and 2009.

I say “I got bronze.” It was definitely a landmark race to be involved in.

» This feature was first published in the December edition of AW magazine, which is available to order online in print here and read digitally here