Peter Snell – titan of the track 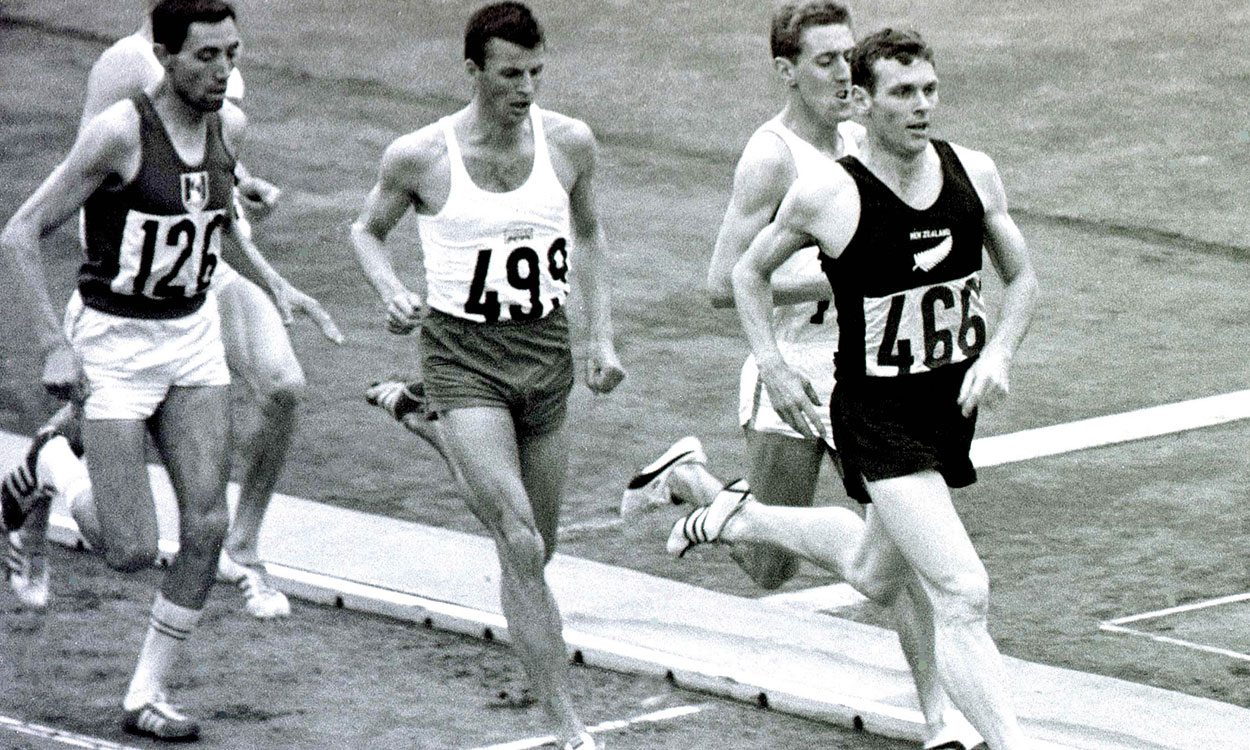 Last year was a record-breaking one in sport for New Zealand. The island nation, renowned for its haka-dancing rugby team, secured its largest ever medal haul at the Olympics in Rio.

Four of those medals came in athletics, including a bronze in the men’s 1500m for veteran Nick Willis, adding to his silver from Beijing.

Although Lovelock’s was the first on the board, the country’s affinity with middle-distance running was truly established more than two decades later thanks to the exploits of Peter Snell.

Having shown early promise as a rugby and tennis player, the Te Aroha-native shifted his focus to middle-distance running in his late teens.

After breaking into the Waikato provincial squad, Snell began to compete nationally. At one meet in Auckland, he ran the 880yds in a PB of 1:54:2. A chance meeting with an old school friend at this meet would change the course of the sport.

Snell recalls his friend “rushing down after the race and saying, ‘You’ve got to meet my coach.’” The coach in question was Arthur Lydiard, the man who oversaw the nation’s golden era on the track. He also incorporated endurance development and periodisation into his training routines, a turning point in the discipline.

“People wanted me as a miler, especially after I got a world record in 1962. By the time Tokyo came around, I thought, ‘Can I even run a world-class 800m?'”

For Snell, it was Lydiard’s approach which really appealed to him. “He was so positive. He would say to me, ‘You’ve got more speed than anyone else I’ve ever trained’.” For a 19-year-old Snell, whose headmaster had told his parents he was an academic failure, Lydiard’s encouragement was “music to [his] ears”.

For three years, Snell endured his new coach’s punishing regimes. One hundred miles a week was standard, sprints and hill circuits thrown in for good measure.

The aim was to get to Rome for the 1960 Games, a feat he achieved seven months before the competition. With only his 800m qualifying time in February 1960 to account for his ability, however, some in the New Zealand team questioned his selection. “I knew differently,” he asserts. “I was on a steep improvement curve. By the time the Games rolled around in September, I was in much better shape, endurance-wise.”

Unknown and underestimated – two labels most runners would relish going into a major championships with. It was only after his arrival in the Italian capital that he started turning heads.

Murray Halberg, who went on to win the 5000m in Rome, was another student of Lydiard. In the lead-up to his first heat, Snell joined Halberg in the Olympic Village, completing time trials on the practice track. Like their coach, Halberg offered the support that would help push Snell to his full potential.

This approach, combined with Lydiard’s endurance training, paid off for Snell as he recorded a PB (1:48:22) in his first-round heat. He was then forced to run another round that afternoon, where he qualified for the semi-finals. Looking back on a schedule that could end many athletes’ competitions on the first day, Lydiard’s training made it “feel easy” for the Kiwi.

Snell went on to beat favourite Roger Moens in the semi-final by fifteen hundredths of a second before pipping the Belgian by seven hundredths. His time of 1:46:3 was an Olympic record. “I was the only one with endurance training. Had it just been three races, Moens probably would’ve had it,” he suggests.

After missing the opening ceremony four years earlier to focus on the heats, the reigning gold medallist was his country’s flagbearer in Tokyo. He also went into the competition expected to bring home the gold, a totally different set of expectations to those in Italy.

At the time, he was producing the best performances of his career, holding the world records in the 800m (1:44:3) and the mile (3:54:4). The pressure was unprecedented. He said: “People wanted me as a miler, especially after I got a world record in 1962. By the time Tokyo came around, I thought, ‘Can I even run a world-class 800m?’”

He needn’t have worried. Like four years before, a time trial in the Olympic Village (this time against American Tom O’Hara) laid his fears to rest as he came within a whisker of another world record in practice. Snell’s endurance would be stretched to its limits as his route to two finals consisted of six races in eight days. A day’s rest, however, was all he needed between juggling the 800m and 1500m rounds, before two surprisingly straightforward finals. “Everyone just trundled around. I was the fastest finisher in there and everyone just dawdled around waiting for something to happen.”

Snell had achieved the holy grail of track running – an 800m-1500m double. 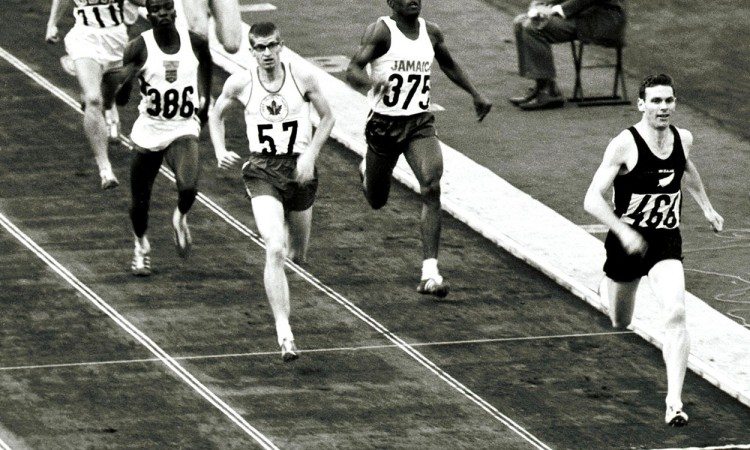 Even winning just the 800m has failed to deliver the same flourish as Snell’s Sixties spree. The final in London, won in emphatic fashion by David Rudisha, was the first to break the 1:41 barrier, a mark at which it had been stuck since 1981. In Beijing 2008, Snell’s best time would have won gold.

On this plateau, the former champion reflects on a change in racing culture. “Runners are gassed out from the early round heats and don’t have it in the tank for the final. You run as well as you need to, to win,” he said.

Snell’s unprecedented success lay not just in his physical prowess – 1964 1500m bronze medallist John Davies remembers Snell “kicked up great wads of earth” as he hit the turn. He was also psychologically superior.

Unlike fellow Antipodean Herb Elliott, there was no desire to “crush people”. “My mental approach was not focusing on the individuals I couldn’t control, but focus on myself. “It normally worked out all right,” he laughed.

There’s no denying Snell was an exceptional runner, standing out also for the brevity of his career. After eight years as the undisputed titan of the track, Snell hung up his spikes. A lack of money and social life brought about his early retirement. “I worked, I ran and I slept. That got old after a while. What else did I have to prove? It just wasn’t worth the sacrifice.”

Yet, he never truly left the sport.

After 10 years working for a tobacco company, Snell was rewarded with a coaching placement at Loughborough College. There, he discovered a passion for physiology.

“I worked, I ran and I slept. That got old after a while. What else did I have to prove? It just wasn’t worth the sacrifice”

Needing funds to pursue further education, Snell entered Superstars, an all-around sports competition pitting elite athletes against each other. He won, of course. Looking back on the event, Snell jokes: “My misspent youth paid off!”

With the prize money, he headed to UC Davis in the United States, where he gained a BSc in human performance before embarking on a PhD in exercise physiology at Washington State University.

Proving to himself, and his old headmaster, that he “wasn’t a dummy after all”, Snell considers his academic accomplishments as among his greatest. “These things persist in your mind. After Loughborough, I realised my school results were wrong and I did have an academic side. That’s great to find out, isn’t it?”

After graduating from Washington State, he joined the University of Texas Southwestern Medical Center in Dallas as a research fellow. It was also in Dallas where he met his wife, Miki. More than three decades later and the couple are still in Dallas. “I’m forever grateful for the opportunities the States has given me.”

Thirty years of marriage, four years of track dominance and forever in the history books, longevity has been at the centre of Peter Snell’s life. Endurance has become key to success in the 800m and 1500m and it was Snell, with the help of Lydiard, who brought that about. A rich culture of Kiwi middle-distance runners spawned from Snell’s feats, and his contribution to medicine has been equally significant.

To repeat his own words, “It worked out all right.”