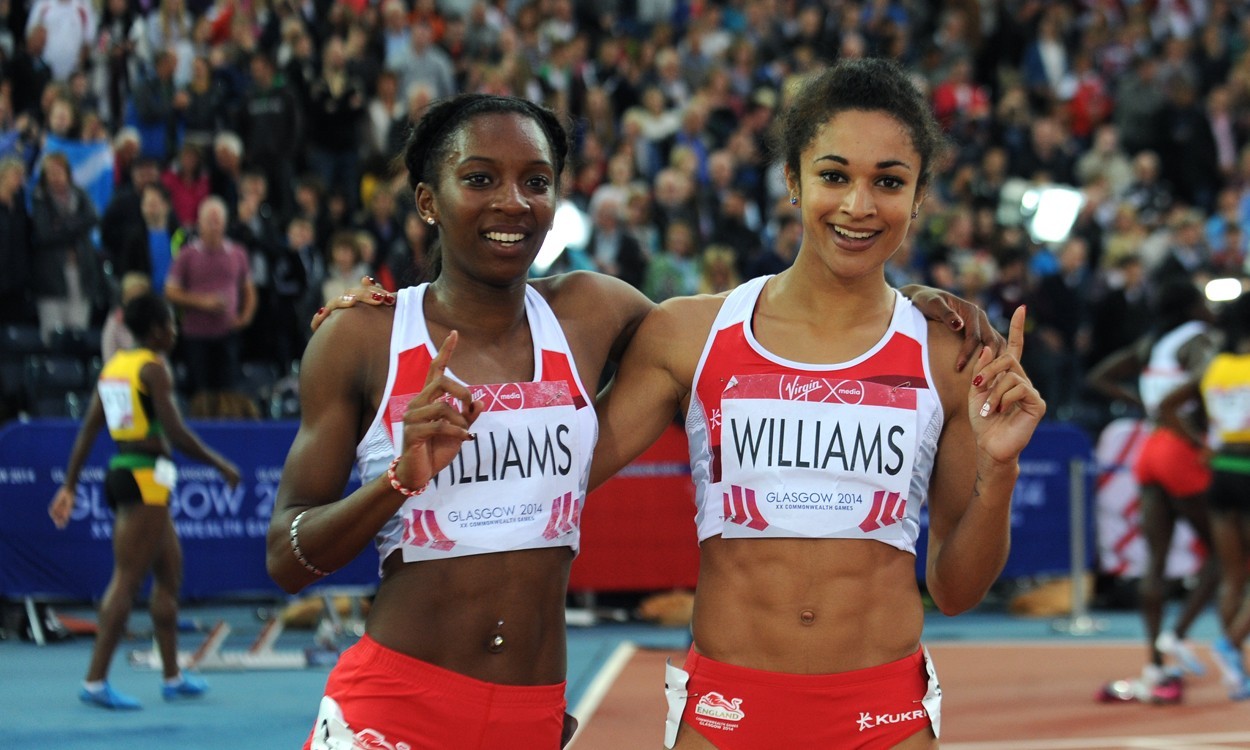 Blessing Okagbare claimed her second gold of the Games with victory in the 200m, though the Hampden Park roar was more likely for the three athletes behind her as Jodie Williams, Bianca Williams and Anyika Onuora made it an England two-three-four, all setting personal bests in the process.

Storming down the home straight for silver, Jodie clocked 22.50 behind the Nigerian’s 22.25 to go equal second with Abi Oyepitan on the UK all-time list behind Kathy Cook, as Bianca equalled Sonia Lannaman’s 22.58 to go equal third on the all-time rankings. With 22.64 Onuora goes equal fourth with Emily Freeman.

“It’s so nice to come to a championships and run a PB because it means you’ve absolutely given it your all,” said Jodie. “I felt I fought myself across that line.

“I knew it would take a PB to get a medal. All the other girls were in such good form and I knew Okagbare was going to take it out. I had her on the outside so I was literally going to just try and chase her down and hang on to her as much as possible.”

Their team-mates were more successful in the men’s half-lap event as Rasheed Dwyer, Warren Weir and Jason Livermore claimed a cleansweep of the medals – Dwyer taking the title in 20.14. Weir had been the favourite but he looked as though he could have been in a bit of pain as he crossed the line in 20.26 for silver. Livermore ran 20.32 for bronze ahead of Mosito Lehata who ran a Lesotho record 20.36 to better his own national mark by one hundredth of a second. It is the first time Jamaica have ever taken the top three spots in this event at the Commonwealths, matching a feat England achieved in 1990. England’s Danny Talbot placed seventh with 20.45.

David Weir added to his extensive gold medal collection as the six-time Paralympic champion cruised to T54 1500m victory in 3:21.67, well clear of Australia’s defending champion Kurt Fearnley with 3:23.08. Third at the bell, Weir went out wide to come on to the back straight leading. Here he pulled away with a clear lead gained coming off the final bend and he raised his arms around 10 metres from the line in celebration. Bronze went to Canada’s Alex Dupont with 3:23.62 as England’s Will Smith – part of the winner’s Weir Archer Academy – clocked 3:25.04 for fifth, one place ahead of Canada’s Josh Cassidy.

Botswana’s Nijel Amos, second behind Kenya’s Olympic champion David Rudisha in London two years ago, turned the tables on the world record holder as he defied what appeared to be Kenyan attempts to block him on the final bend to storm down the home straight and clock 1:45.18 to Rudisha’s 1:45.48.

Alongside Rudisha on the final bend was Ferguson Cheruiyot Rotich who formed a wall alongside his fellow Kenyan but Amos, who claimed claimed bronze in the two-lap event at the Commonwealth Youth Games in Douglas in 2011 before winning the world junior title the year later, had enough left to surge around the Kenyans and storm down the home straight with a 25.2 second final 200m. South Africa’s Olivier Andre came through for bronze in 1:46.03 to Rotich’s 1:46.09.

Scotland’s Guy Learmonth made the most of the vocal home crowd support to clock a 26-second last 200m and move from last to sixth in a 1:46.69 PB, taking 0.16 from his previous best run in May and he beat England’s Michael Rimmer by two hundredths of a second. The Scot later revealed how Rudisha had thanked him for making the final, saying: “When they cheer for you, I think they’re cheering for me.”

Jazmin Sawyers soared to silver in the women’s long jump, the 20-year-old adding a senior medal to the Commonwealth Youth gold she claimed in 2011. Nigeria’s Ese Brume got the gold thanks to her third-round leap of 6.56m, while Sawyers was secured a medal going into her final leap and she saved the best until last, her 6.54m season’s best boosting her up one place on the podium.

Bronze went to Canada’s Christabel Nettey with 6.49m as Sawyers’ team-mate Lorraine Ugen leapt 6.39m for fifth. Earlier on their compatriot Shara Proctor had left the track in tears as she pulled up in her first attempt through injury.

There was a silver for Scotland in the women’s 400m hurdles as poster girl for the Games Eilidh Child clocked 55.02 behind Jamaican favourite Kaliese Spencer with 54.10. The Scot, who also secured silver in Delhi in 2010, didn’t let the pressure get to her and ran a solid race to finish more than half a second ahead of Spencer’s team-mate Janieve Russell with 55.64.

South Africa’s Cornel Fredericks led the 400m hurdles rankings ahead of the Games and he led the final too as he clocked 48.50 to grab gold ahead of Trinidad & Tobago’s world champion Jehue Gordon with 48.75. Jeffery Gibson bettered his own Bahamian record with 48.78 for bronze. England’s Niall Flannery, who only secured a spot in the final after the late disqualification of Jamaica’s Roxroy Cato, ran 49.46 for fourth as his team-mate Richard Yates finished seventh with 50.13. With both of his team-mates having been disqualified, Annsert Whyte was the sole Jamaican in the final but his foot caught the barrier on the final bend and he crashed out.

Vikas Gowda threw a best of 63.64m to claim the discus title and become the first Indian man to win gold in a field event at the Commonwealth Games. Jamaica’s Jason Morgan had taken the early lead and bettered his leading mark to 62.34m in the second round but Apostolos Parellis of Cyprus went further with 63.32m, the throw that eventually claimed him silver. Morgan bagged bronze as Wales’ Brett Morse threw a best of 60.48m in the fourth round for fifth, England’s Carl Myerscough threw 59.88m for seventh and Scotland’s Angus McInroy threw 54.12m for 12th.

There was a nervous wait for Scotland’s Lynsey Sharp and England’s Jenny Meadows as they finished fourth and fifth in the first 800m semi final in a photo finish – only the top three securing final places automatically. Luckily for them, the second semi-final, won by Meadows’ team-mate Jess Judd, who ran a well-judged race in the pouring rain, was slower, and they both progress as fastest losers. Kenya’s world champion Eunice Sum went quickest with 2:01.38 ahead of Canada’s Melissa Bishop and New Zealand’s Angie Smit in the first heat.

Australia’s Olympic 100m hurdles champion Sally Pearson missed the Commonwealth Games record by just 0.04 to qualify as quickest for Friday’s night’s final. She ran 12.69 and her team-mates Michelle Jenneke and Shannon McCann joined her. England’s Tiffany Porter ran the second-quickest mark of 12.84 to also advance, though her team-mate Serita Solomon missed out on a place in the final.

Five athletes bettered the automatic qualifying mark of 57.00m in the first round of the discus competition, favourite Dani Samuels of Australia and England’s Jade Lally among them. Joining them in the final is Lally’s team-mate Eden Francis and Scotland’s Kirsty Law. 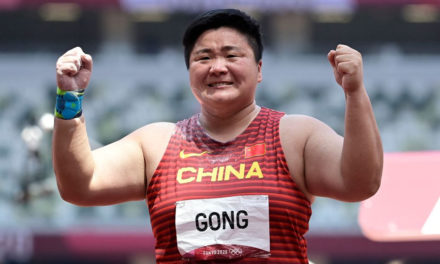