The first award winners of this year’s World Athletics Gala have been named, with Germany’s Guido Müller among those to receive recognition.

Müller, the 2014 masters’ male athlete of the year, currently holds 17 world masters records across a range of age groups from M45 to M75, with four of those set this year. 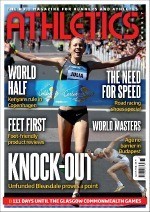 The 75-year-old, who is arguably the world’s greatest ever masters athlete, this year won seven titles at the European Masters Championships in Izmir as well as five gold medals at the World Masters Indoor Championships in Budapest, after which he featured on the cover of Athletics Weekly magazine.

This year’s medals contribute to Müller’s impressive haul which includes a total of 82 titles at European level and 36 at world level, as well as his 126 national masters titles all claimed since turning 45 in 1983. He has a PB of 51.3 for the 400m hurdles and just missed making the GDR’s team for the Tokyo Olympics.

Müller was also the 2009 winner of the IAAF world masters athlete of the year honour and he received his award at the Monte Carlo Gala from Sebastian Coe.

This year’s Gala is to be held in Monaco on November 21, with two other award winners also named ahead of the event.

The Masters’ Female Athlete of the Year Award is to go to Lavinia Petrie who has also broken a number of world records this year including the W70 3000m, 10,000m and W70 half marathon best. The Briton-turned-Australian is now the holder of eight world records or world best performances from the W50 to W70 age groups.

Marc Ventouillac, the head of athletics at French sports newspaper l’Equipe, has been named the winner of the IAAF World Journalist of the Year award.