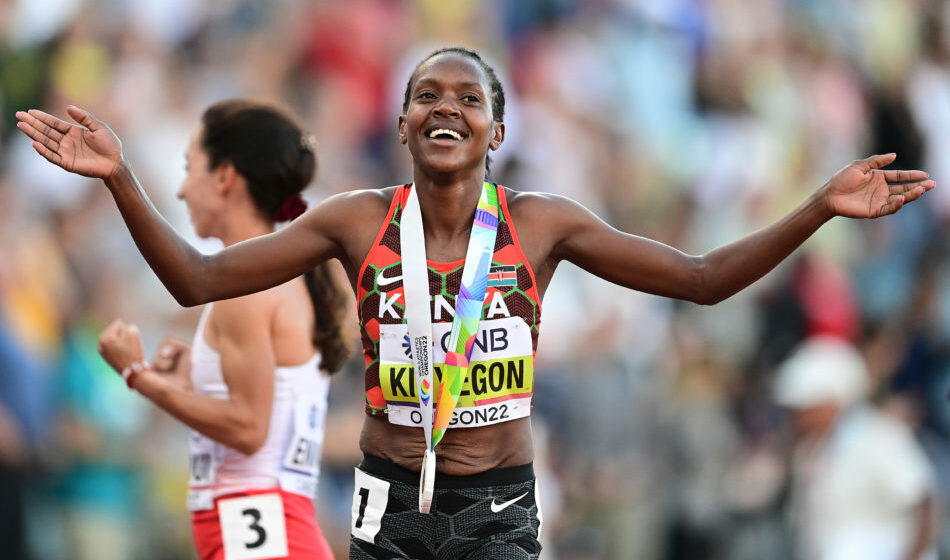 Brutal. Absolutely brutal. And yet utterly brilliant all at the same time. The women’s 1500m final of the World Championships in Eugene was sport in the raw – a relentless and breathless spectacle which left athletes and onlookers alike gasping.

From the starting gun at Hayward Field, there was no messing around. The pace and intensity levels rocketed and it took little time to realise this was going to be very straightforward, all-out battle for honours.

Gudaf Tsegay of Ethiopia upgraded her 2019 world bronze to silver with 3:54.52 while Laura Muir finally got the world outdoor medal which had previously eluded her grasp in 3:55.28 and became the first British medallist at Oregon 2022.

The athletes remained strewn across the track long after the outcome had been settled. The dust may still be settling now.

It was Tsegay who shot off the line, hotly pursued by her team-mate Hirut Meshesha, Kipyegon and Muir. The first lap was covered in a rapid 58.82 and that leading quartet quickly separated themselves from the rest of the field.

Running 1500m this way hurts – a lot – and the first sign of a toll being taken was the pace dropping a little to an 800m split of 2:03.18, but that was still inside the world record. As the battle raged, four soon became three as Meshesha began to fall off the pace.

Tsegay and Kipyegon appeared to be exchanging less than friendly words as the race flew onwards and they kicked at the bell, the Kenyan took the lead with around 250 metres to go and did not look back. Muir had been in this position before and left the track empty-handed but it was clear there was to be no heartbreak this time and that a podium spot was hers. For a moment a world silver to match the Olympic honour she won so brilliantly almost a year ago looked possible but Tsegay could not be caught. 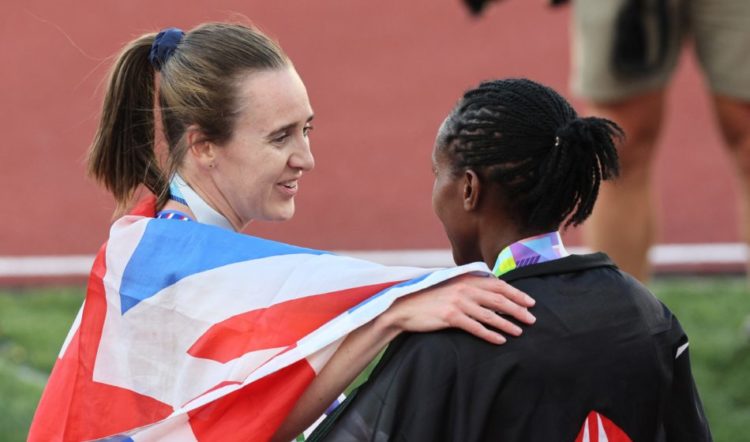 For Kipyegon, this was another world title to go with her gold from 2017, as well as silvers from 2015 and 2019, and she has surely cemented her place – if she hadn’t already – as one of this sport’s true greats.

“Everybody was expecting something special from me,” said the Kenyan. “Everybody was like: ‘Faith, we believe in Faith’, so it was a real pressure. But I managed it.

“I knew it was going to be fast so I was well prepared for that. I knew everything was possible. This was my dream to be a world champion.”

Kipyegon and Muir, as they had done in Tokyo, shared the lap of honour together. That Scotland’s second ever individual World Championships medallist (Liz McColgan is the other) was competing at all was quite an achievement, given that earlier this year she had to overcome the most serious injury of her career so far.

A stress reaction to her femur meant crutches, time away from the track and careful management. She will now head towards the Commonwealth Games in Birmingham – and the pursuit of another honour she craves – with a massive spring in her step.

“That is a World Championship final, you have got to expect it to be hard and be quick. The splits on that race were on an extra level,” said Muir after finishing exactly six seconds ahead of Ethiopia’s Freweyni Hailu. “It does show if I can get 3.55 under those kind of splits then there is a really fast time in there.

“I am so delighted. It was all about the medal, that was what I wanted. I took my time trying but I am so, so happy I got it. I had the most significant injury of my career this February. I didn’t run for two months. That is the longest time I’ve had off running since starting but I had confidence in myself and my ability.”

After coming narrowly close to a medal in her previous three world finals, Muir added: “This time last year I didn’t have any global outdoor medals and now I have two. I am so delighted. This was the one that was bugging me. After I got the silver last year, I was like ‘this is the year I am going to get it’ and I’ve got it. I am so pleased.”