Joe Kovacs gets Diamond League Final off to a spectacular start 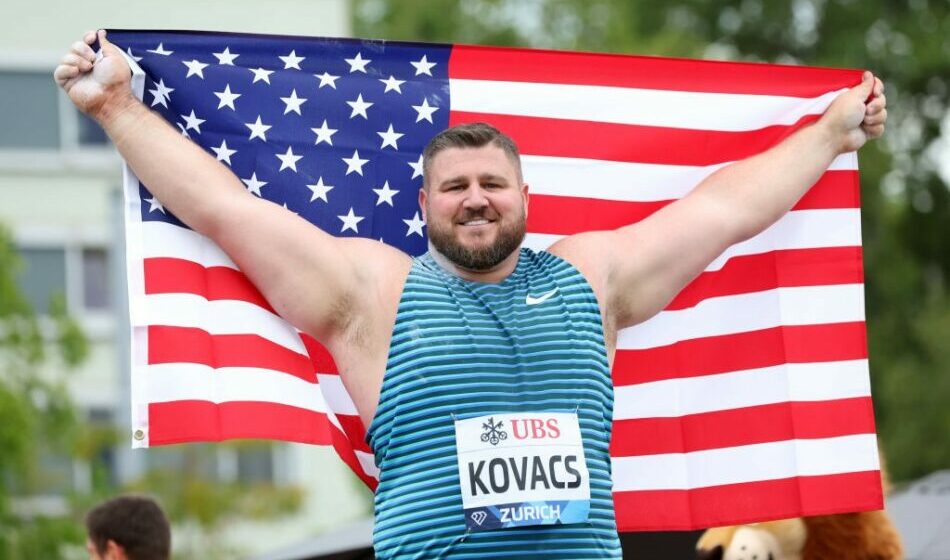 Joe Kovacs produced the throw of his life – and the third-biggest of all-time – to win a spectacular shot put contest on the first day of competition at the Wanda Diamond League final in Zurich.

The two-time world champion reached out to a remarkable 23.23m with his second-round effort to defeat the current Olympic and world gold medallist Ryan Crouser, who managed a best of 22.74m as he recorded just two legal throws out of six. Crouser’s world record of 23.37m remains intact, however.

It had looked set to be a memorable contest right from the off at the city centre Sechselautenplatz venue which sits in the shadow of the Opera House. Crouser and Kovacs both equalled the meeting record with opening efforts of 22.67m before Kovacs took control with his following throw.

The Commonwealth champion Tom Walsh finished third thanks to his first effort, reaching 21.90m, while his fellow New Zealander and Birmingham silver medallist Jacko Gill was fourth with 21.51m.

There was an American victory in the women’s shot put event, too, as world champion Chase Ealey took the Diamond League title with a third-round 20.19m. Canada’s Commonwealth champion Sarah Mitton was second with her opening 19.56m, while European silver medallist Auriol Dongmo threw 19.46m for third. 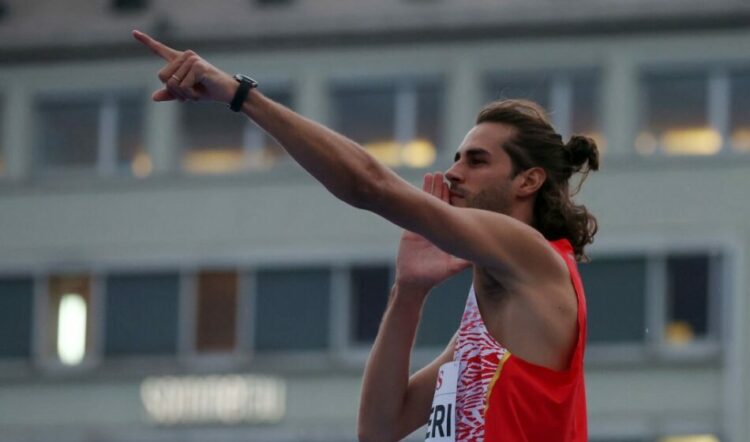 The newly married Gianmarco Tamberi gave himself further cause for celebration by winning another Diamond League high jump title, also pocketing $30,000 and a wild card entry for next year’s World Championships in Budapest – the prizes on offer to all of the victors.

The Italian joint Olympic champion was severely tested, however, by Juvaughn Harrison. The young American was near faultless as he missed just one attempt (at 2.27m) through the heights and went over 2.32m at the first time of asking. Tamberi missed his opening attempt at that height and passed before tackling 2.34m. After completely silencing the Zurich crowd, he went over second time around while Harrison responded by also clearing that mark, albeit at the third attempt, for what represented his highest jump outside of the USA.

That round had given Tamberi a crucial advantage, however, and although he could not go over 2.36m, neither could his opponent and the outcome was settled. 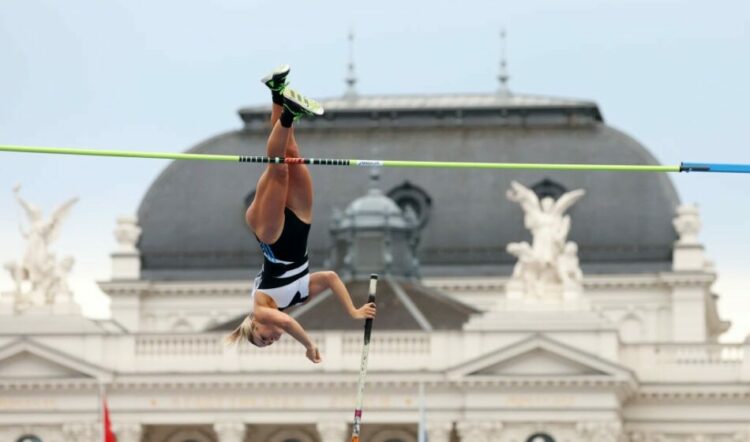 In the women’s pole vault, Commonwealth champion Nina Kennedy won a fascinating duel with American Sandi Morris, the Australian coming out on top with a third-time clearance of 4.81m, a season’s best which fell just one centimetre shy of her personal best.

Morris had stayed in contention thanks to a last-gasp vault of 4.76m, but could not go five centimetres higher and Kennedy saved her best for last. Slovenian Tina Sutej was a distant third with 4.61m. 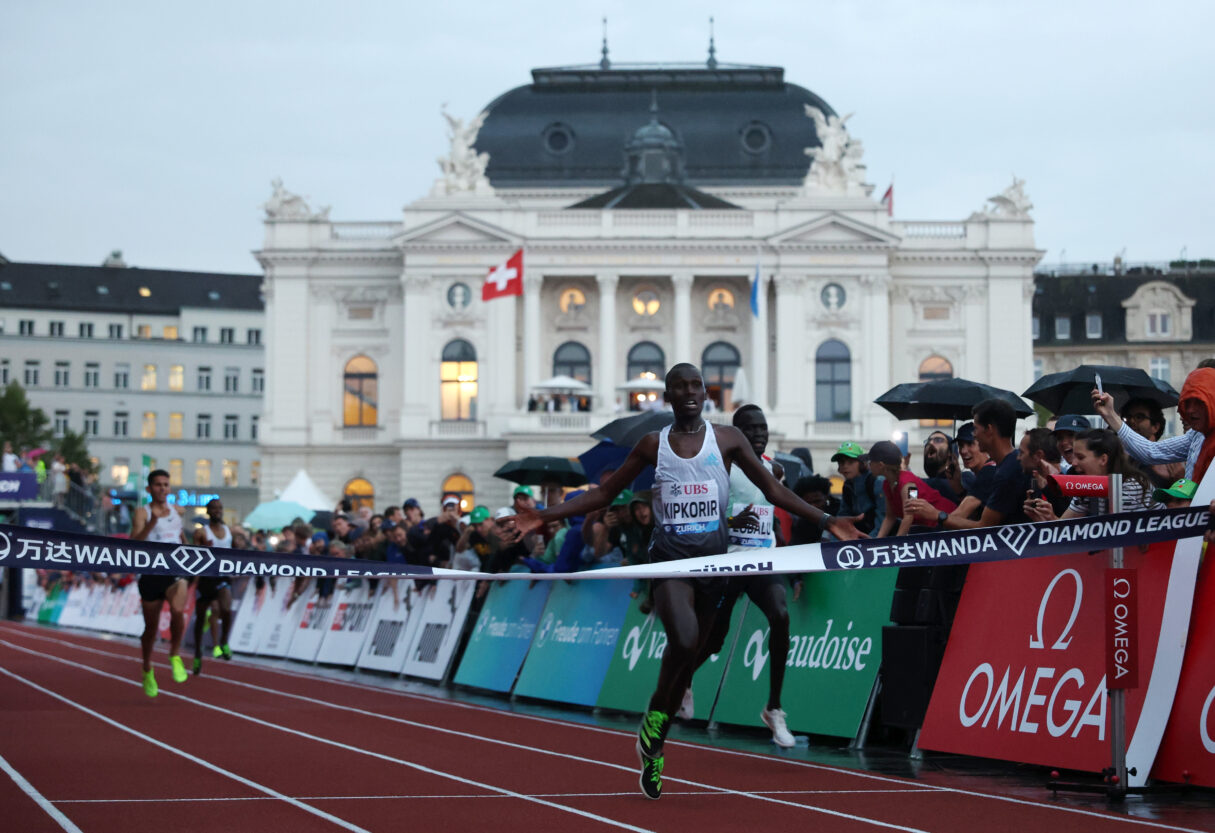 The only track events of the opening day were the men’s and women’s 5000m contests which, as with last year’s meeting, took place on a temporary 560m-long circuit which wound its way around the Opera House. Both races saw dramatic finishes which produced Kenyan winners.

In the men’s race, Ethiopia had led the midway charge through Olympic 10,000m champion Selemon Barega and then last year’s Diamond League winner Berihu Aregawi. With 2015 winner Yomif Kejelcha and world silver medallist Jacob Krop having stepped off, it was Nicholas Kipkorir who proved strongest down the finishing straight as he won in 12:59.05 from Dominic Lobalu of South Sudan (12:59.40). A surging Grant Fisher was third in 13:00.56. 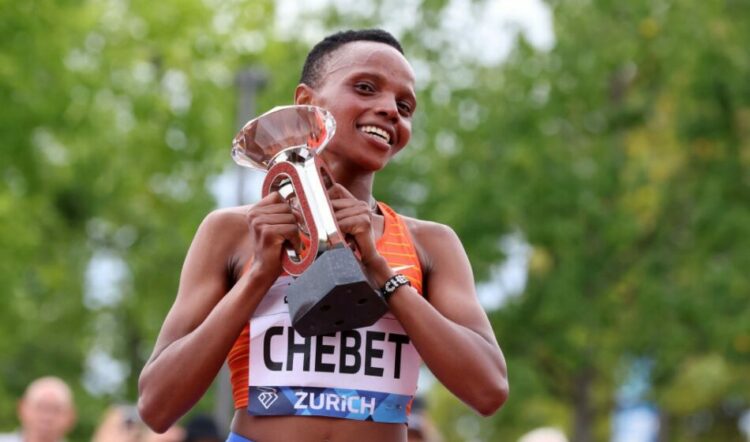 The women’s race was won by world silver medallist and Commonwealth champion Beatrice Chebet, who clocked 14:31.03 to just edge out the 14:31.52 of fellow Kenyan Margaret Chelimo Kipkemboi.

Ethiopian world champion Gudaf Tsegay missed out on what would have been her first Diamond trophy, however, as she had to settle for third in 14:32.11. Olympic champion Sifan Hassan was fifth in 14:37.05 while Britain’s Amy Eloise-Markovc was eighth with 15:28.24.

Tsegay had led the way through 2000m and 3000m before American Alicia Monson hit the front, but it was Chebet who had the final say as she came through on the inside in the closing metres.