Eden’s in paradise with golden double at British Championships 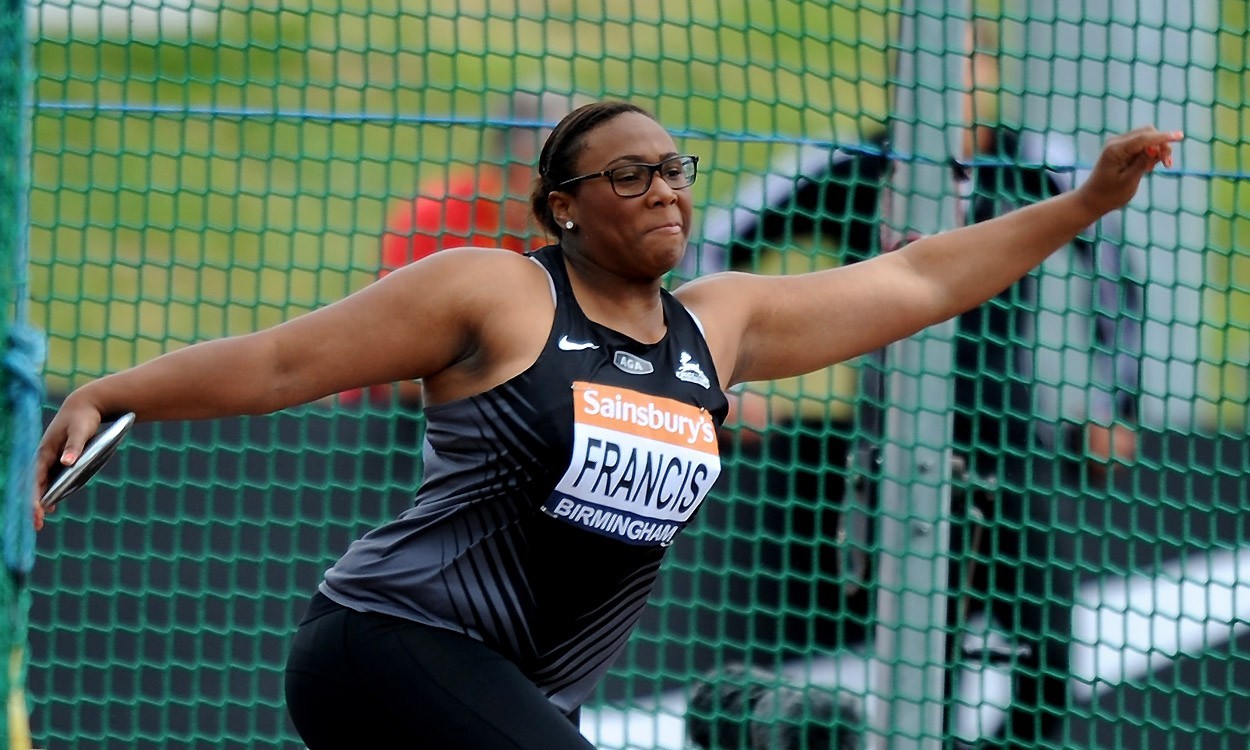 Eden Francis sealed a shot and discus double during a glorious three-hour spell on Saturday. It means the 25-year-old Birchfield athlete has now won seven national titles and it came after more than a year on the sidelines due to two prolapsed discs in her back.

Firstly, competing just after midday Francis became the first winner of the championships with a best shot put effort of 16.66m. Then, a couple of hours later, she took the discus crown on the opposite end of the arena with 55.93m.

“Training has been really difficult so I never thought I’d have a decent season,” said Francis, who completed the same double back in 2012. “I was just hoping I wouldn’t embarrass myself. But I’ve already managed something respectable so I’m really happy.”

Now, she heads to the Commonwealth Games next month where she represents England in the shot and discus in Glasgow.

With the traditional Saturday teatime 100m finals moving to Sunday to coincide with BBC’s live coverage, there were still plenty of speed merchants on show for sprints fans to enjoy, mainly in the 200m finals where Jodie Williams and Danny Talbot took the titles.

Williams, the former world junior champion, is handling the tricky transition from teenage to senior ranks and in Birmingham she ran 22.79 to beat her namesake Bianca Williams and Anyika Onuora as the final saw three athletes go inside 23 seconds for the first time ever.

The winner said: “I really enjoyed it. It’s a weird timetable – so I feel like I’m finished but I’ve still got to race tomorrow. That’s my second time I’ve run 22.7, and my fourth time sub-23, so I really cannot complain at all.”

In the men’s 200m, Talbot clocked 20.42 to win with relative ease as Adam Gemili, a world finalist in 2013, came off the bend in third and clawed his way past James Ellington for silver.

“I’ve got a great rivalry with Adam – we are really good friends off the track and it’s great when we can race each other,” said Talbot, while the ever-smiling Gemili mentioned he’d suffered from cramp coming out the blocks.

Jodie Williams won the Sainsbury’s performance of the day award, but Laura Weightman must have run her close with her stirring 1500m victory over Laura Muir. Stretching the field from the front during a 59-second last lap, Weightman determinedly held off Muir in 4:09.77 with Hannah England third.

“I wanted that so much – it was a really strong battle,” said Weightman. “It’s been a great season so far with my big PB, I’m feeling a lot stronger and fitter. Now I’m looking forward to both the major championships.”

Michael Rimmer won his seventh national 800m title but his victory was a big surprise after he’d only qualified as a fast loser from Friday night’s heats and was also up against Olympic finalist Andrew Osagie.

After a 53.73 first lap, Osagie eased into the lead down the back straight and led into the home straight with Mukhtar Mohammed on his right shoulder and Rimmer on his left.

It was Rimmer who had the most powerful finish, though, as he burst into the lead with 50m to go to take a gold medal that surprised even himself in 1:48.00.

Tiffany Porter’s victory in the 100m hurdles was more straightforward as she ran 12.85 and Lucy Hatton ran a 13.20 PB in second.

In the men’s field events, Lee Doran won his fourth consecutive national javelin title but only just as his 70.71m beat Bonne Buwembo by 12 centimetres.  The men’s long jump saw JJ Jegede snatch victory with 7.83m in the sixth round as Dan Bramble and Matthew Burton finished just a few centimetres behind.

Border Harriers and Oklahoma State University enjoyed a great half-hour spell toward the end of the afternoon when first Nick Miller won the hammer and then Tom Farrell took the 5000m.

Miller won a competitive men’s hammer contest. The 21-year-old from Cumbria threw 73.96m with Alex Smith and Mark Dry close behind in the minor medal positions.

Sally Peake won the pole vault with 4.30m, while Eilish McColgan and James Wilkinson took the 3000m steeplechase gold medals. “I’m the happiest athlete in the stadium!” said McColgan, after having recovered from food poisoning a few days before the race.

The third and final day of the 2014 Sainsbury’s British Championships features the much-anticipated men’s 100m and, unlike Saturday’s action, is televised live on BBC.

» The July 2 issue of Athletics Weekly will feature more than a dozen pages of reports, photographs and results from the British Championships