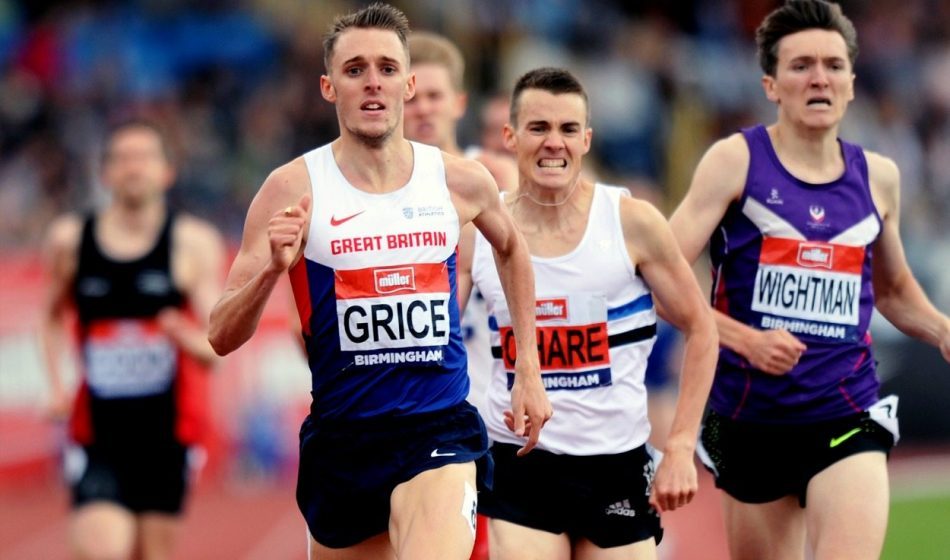 When it comes to preparing for an Olympics, it doesn’t get much better than training with a double Olympic and world champion and Charlie Grice is proving that the many miles logged with Mo Farah are paying off as he’s in the form of his life going into the Rio Games.

The 22-year-old Brighton athlete has been impressive in 2016. His 3:33.60 1500m PB run at the Monaco Diamond League took almost two seconds off his previous best from 2015 and put him in the top 10 on the UK all-time list. Meanwhile, an 800m run at the London Anniversary Games to test his speed one week later did the job as he clocked another lifetime best of 1:45.53 – almost a second and a half quicker than he had run for the distance before this year. Then there’s the 3:52.64 mile he ran in Eugene in May – again an almost two-second PB.

Since finishing ninth in the final of his first World Championships in Beijing last summer, Grice’s road to Rio has taken him via Kenya, Ethiopia, Flagstaff and Font Romeu. Under the guidance of coach Jon Bigg at the Steve Ovett-formed Brighton Phoenix, Grice has been careful to focus on gradual gains year-on-year and the past couple of years have seen training with Farah thrown into the mix.

“It’s a number of things – it’s the weights I’m doing, the altitude, the speed work, being pushed, training with Mo,” Grice says as we discuss his progress. “It’s the consistency as well.

“Touch wood I’ve been avoiding injuries and stuff so everything is coming together at the right time.”

Illustrating his development, Grice was sixth in the inter boys final of the 2009 English Schools 1500m (more can be read on that here) and he claimed an Olympic medal in 2010, albeit in the youth Olympics at 1000m. That year he also won at the English Schools Championships and the 2011 European Junior Championships 10th-placer won European under-23 silver in 2013. In 2014 he made the finals of both the Commonwealth Games and European Championships before his ninth place finish in Beijing, but he’s gone up another level in 2016.

“Obviously he is training for the 5000m and 10,000m so I wouldn’t do all of his sessions but just the amount he is doing – I think it is just the range he has – it’s pretty spectacular,” Grice says.

“This morning he was doing 20 miles on the treadmill, people don’t see that side of it,” he adds, with ‘this morning’ being the morning after Farah’s world-leading 5000m win at the Anniversary Games. “He never gets too far ahead of himself. He is very level-headed and is working incredibly hard so he deserves everything he gets.

“He is definitely passing on some good knowledge but it is more me seeing what he does, seeing how tired he gets and yet he still gets the work done. I think that is one of the main things I’ve learnt.

“He has helped me out a lot,” Grice continues. “It has been really good working with him. He has definitely played a part to my success I’d say.

“We call him ‘Mad Mo’ because he just doesn’t think about it, he just does it, which is what you need to do sometimes – just switch off and get the work done. I’m glad I’m not a 10km runner!”

While the 10,000m runners will be taking to the track in Rio on August 13, Grice’s campaign gets underway with the 1500m heats on August 16 and the British champion is raring to go.

“I think this year I have definitely stepped up another level so it will be good to make the final and then definitely make an impact in that final when I’m there. I’m not ruling out a medal.”