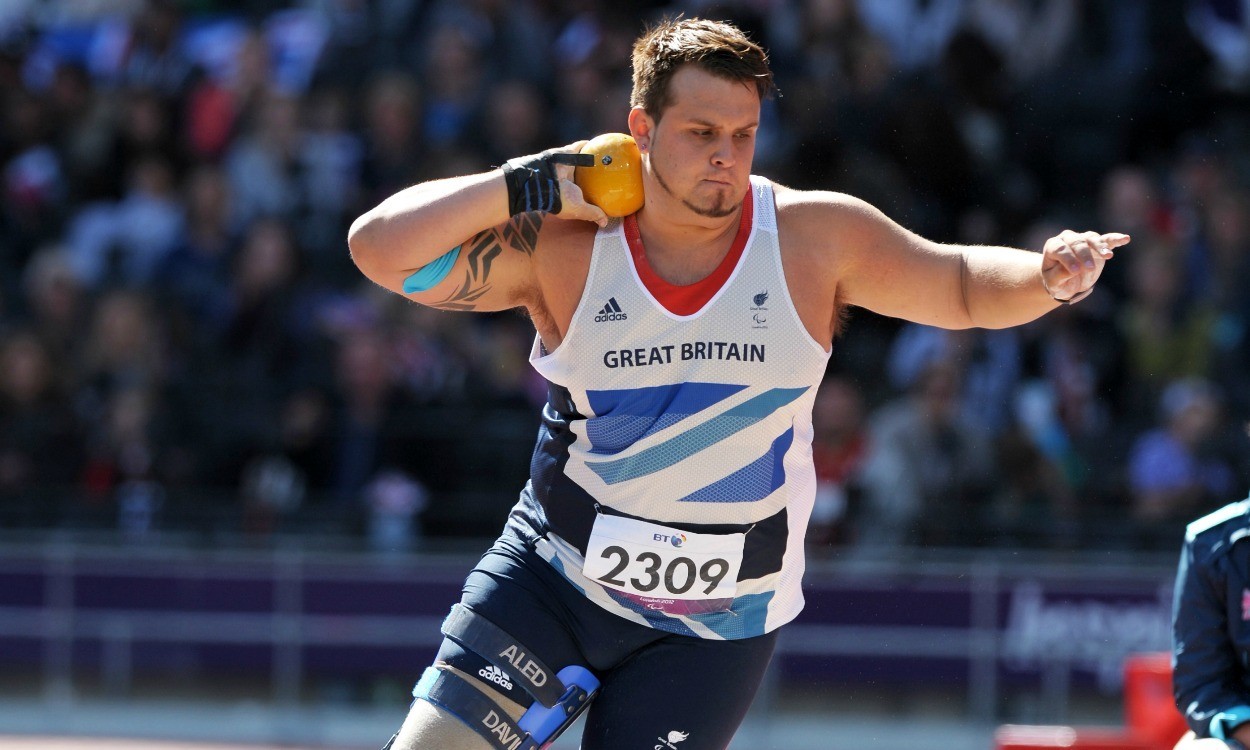 After switching coach and tweaking his technique, 23-year-old Aled Davies is ready to throw further than ever. The London 2012 Paralympic champion has started the 2015 indoor season with unofficial shot put world records in his category and believes he can one day achieve distances that are “on a par with able-bodied throwers”.

Davies was born with a combined disability in his right leg which limits its functionality and means it has missing bones and no muscle growth or ligaments. But hard training, natural strength and a strong mental attitude led to him throwing almost 50 metres in the discus and close to 16 metres with a 6kg shot.

“I want to throw as far as able-bodied athletes,” he says. “It’s a goal that’s very close to my heart and I genuinely think I have the potential to throw 60 metres in the discus and 18-plus in the shot.”

Davies was coached for several years by Anthony Hughes but he has recently moved to being advised by Ryan Spencer-Jones.

“It’s been the hardest six months of my life,” says Davies, on what he describes as an amicable but nonetheless painful split. “I was moving on from a coach who I had been with for nine years and had much success with and have a huge respect for. I was also giving up a family of people that I had trained with.”

“I want to throw as far as able-bodied athletes. It’s a goal that’s very close to my heart”

But he adds: “Sometimes athletes have to be selfish if they want to move on to the next level. I felt I’d got as far as I was going to get and my training has since changed from having an emphasis on me being big and strong to now being faster, more mobile and more technical.”

He continues: “I didn’t want to be ‘that guy’ two or three years down the line who was maybe regretting an opportunity. Ryan has been there and done it and he’s been mentored by great coaches. He’s also known me since I was 15.

The early results are promising, as Davies has started 2015 in great form indoors and is looking forward to the Sainsbury’s British Indoor Championships in Sheffield this weekend. His big goal for 2015, though, is the IPC Athletics World Championships in Doha, while the Rio Paralympics is, naturally, the biggest target of all.

He will be unable to defend his Paralympic discus title in the F42 category, however, after it was taken out the programme and instead he hopes to excel in the shot, an event he won silver in during London 2012.

Surely changing technique this winter has not been easy, though? “It’s one of the hardest things I’ve ever had to do!” he agrees. “It’s been very alien to me. Every athlete gets into habits and they’re hard to change. But when things do come together, it (the shot/discus) goes a long way and I’ve just been hammering the new technique into my body.”

“My training has since changed from having an emphasis on me being big and strong to now being faster, more mobile and more technical”

Davies and his coach are going to Arizona in March for a training camp where they will link up with three-time IAAF world shot put champion John Godina at the World Athletics Center.

Davies bubbles with enthusiasm at the prospect of tapping the expertise of a bona fide throws legend like Godina. The young Welsh thrower is also on something of a comeback trail after what he calls a “rollercoaster year” and a “mixed bag” in 2014.

Davies was captain of the Welsh team at the Commonwealth Games but was disappointed to lose to England’s Dan Greaves in the F42/44 discus final. “I wanted to lead by example but it didn’t quite happen,” he says, looking back on Glasgow 2014. I tasted silver that day and it was not what I wanted.”

Davies and his friends joke that the thrower unleashes “the bear” when he is in unstoppable form. It is his alter-ego and he only wishes “the bear” had emerged last summer in Glasgow.

It wasn’t all bad, though. Davies won double gold at the IPC Athletics European Championships in his native Wales when Swansea staged the event. He is also the reigning IPC world champion in shot and discus going into this year’s big event in Doha.

On that controversial venue in Qatar, Davies shrugs off any fear of the heat by saying: “Everyone is in the same boat. I won the world junior title in Dubai a few years ago and I’m due to compete in Dubai again this year. So I know what that kind of heat is like and it’s testing for everyone.”

It is the kind of positive mental attitude that has helped earn Davies so many medals during his young career. It is likely to win him a few more in future, too, if last month’s form is anything to go by.

British athletes give home crowd in Birmingham plenty to cheer with victories on Saturday as they shine in the women’s events.