Wins for Seifu Tura and Ruth Chepngetich in Chicago 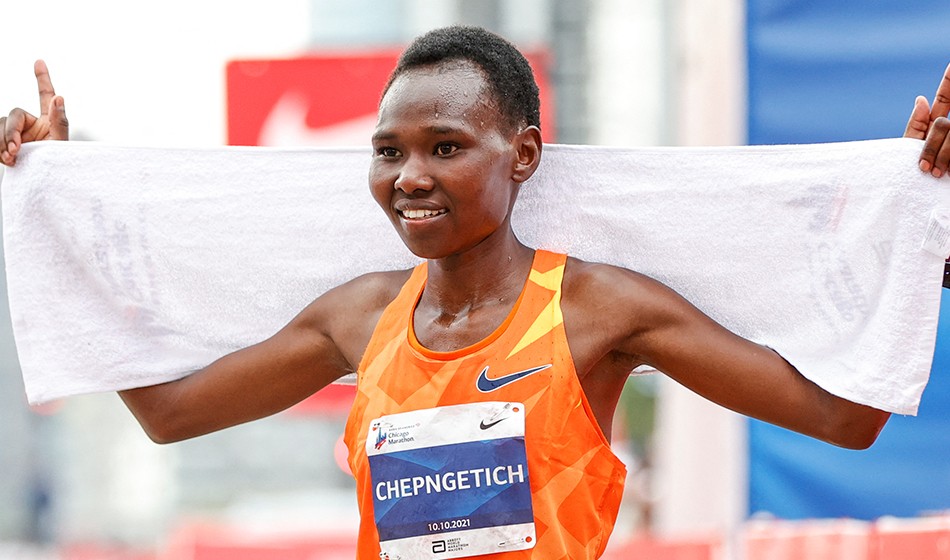 The 2021 Bank of America Chicago Marathon, the latest Abbott World Marathon Major, took place on October 10 with clear wins for Ruth Chepngetich and Seifu Tura in warm, humid and quite breezy conditions with 22 degrees centigrade and 70 percent humidity, even at the early morning start.

Americans Galen Rupp and Emma Bates took runner-up spots though the depth of the international field was not helped by the counter claims of Berlin, London, Boston and New York in Olympic year, meaning Chicago fell slightly short in comparison to the other majors.

Chepngetich won in a time of 2:22:31 with a bizarre pacing strategy which looked at one stage like she might join Paula Radcliffe as a world record breaker on this undoubted potential world record course.

In contrary, the Kenyan’s second half took seven minutes longer than the first but such was the lack of quality up against her, she still won by just under two minutes.

The reigning world champion had looked a class apart in the women’s entries with a 2:17:08 PB, even though she failed to finish at the Olympics, but a stunning 64:02 world record half-marathon earlier in the year underlined her seeming vast superiority in her US race debut.

She was going so fast even her male pacemaker had had enough and she was left out all on her own.

Victory for Kenya in the women's elite race at @ChiMarathon:

Some observers commented she was on 2:15 pace, using her overall pace but ignoring the fact that her 5km splits were slowing so much she would be lucky to break 2:20. So it proved. The Kenyan just got slower and slower with her splits of 16:58, 17:21 and 17:52 and 18:15 over the second half, decelerating throughout. She ended up over five minutes down on her PB as paid for her lack of race craft in terms of time if not in position.

Chepngetich said: “This is my first time in the United States, and I have to say I’m so excited and I’m happy for the win today. The race was good, it was nice, but it was tough. To push alone is not easy.”

The American said: “I caught up to Keira D’Amato and the pacer, that was pacing for 2:24. Then I started seeing women ahead of me and that just spurred me along so much, gave me that boost of energy.”

However, she never really looked at her best and clocked 75:42 in the second half of the race, finishing with 2:27:19.

Hall was followed by Keira D’Amato’s 2:28:22 as the USA took three of the top four places.

Former Olympian Alyson Dixon was the first British woman in 46th in 2:50:43 after Rosie Edwards was initially wrongly listed in the results as finishing sixth. 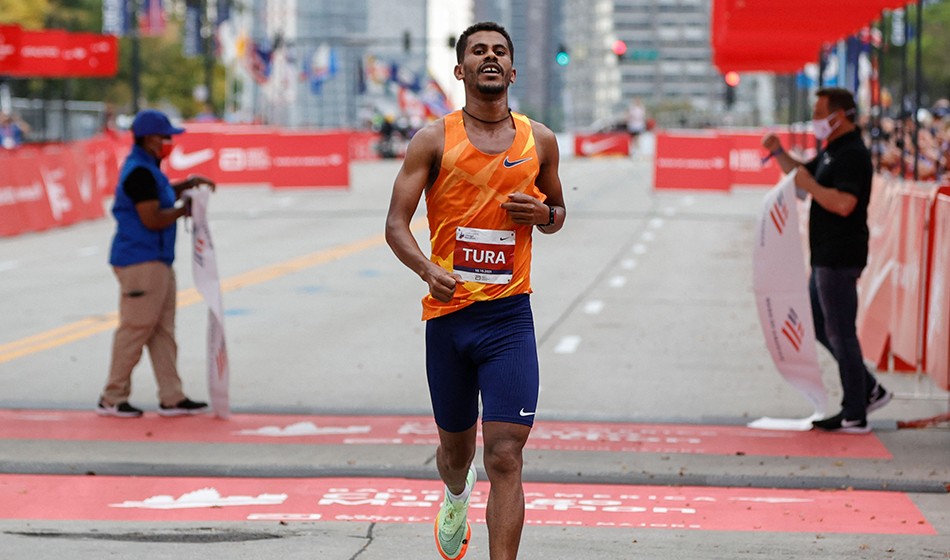 The men’s race also started fast but unlike the women’s it also finished fast.

Ethiopian Tura was thought of a consistent performer but there was little in his past form, other than a few fast times, to suggest that he was a potential winner of a big marathon major but he ultimately proved the clear class of the field.

At the post-race press conference, Tura, through a translator, said he was feeling good late in the race but was aware of Rupp’s ability to close well, so he knew that he should try to break the race open when he did.

Rupp only ranked eighth among the field on fastest times with a 2:06:07 PB from Prague in 2018, but the American, who won Olympic silver at 10,000m in 2012, a marathon bronze in Rio and finished eighth in this year’s Olympics in Sapporo, was favoured by many to regain the Chicago crown – having won in 2017.

He held back when they blasted the second 5km and caught the group with more even pace running and again dropped when they surged and was 10 seconds back at halfway again got back in contact and he ultimately proved Tura’s greatest challenger.

Rupp said: “Normally I like to be right up there but I really wanted to be cautious going out that first half. Races aren’t won in the first 13 miles. I wanted to stay smart. I was keeping an eye on the clock and I had confidence that they were going to come back.”

Of the closing miles he said: “I was doing everything I could to try to cover Tura. He went for broke and ran an unbelievable last three to four kilometers to bring it home.”

Kenya’s Reuben Kipyego the quickest on the start line with a 2:03:55 PB from finishing second in Milan this year, was eighth in 2:14:24 losing nearly 10 minutes on his second half compared to his first.

This is how @RomanchukDaniel edged @MarcelEricHug in an epic men's elite wheelchair race in Chicago.

American Daniel Romanchuk defended his men’s wheelchair event with a very strong kick up the last hill in the last kilometre.

He finished three seconds up on Swiss Olympic champion Marcel Hug’s 1:29:09 with American Aaron Pike completing the podium with 1:29:29.

Hug had won Marathon majors in both London and Berlin in recent weeks.

Britain’s Johnboy Smith excelled to finish a close fourth in 1:29:38.

For the women’s wheelchair race, Tatyana McFadden won her ninth title in what was a mostly American field in 1:48:57.