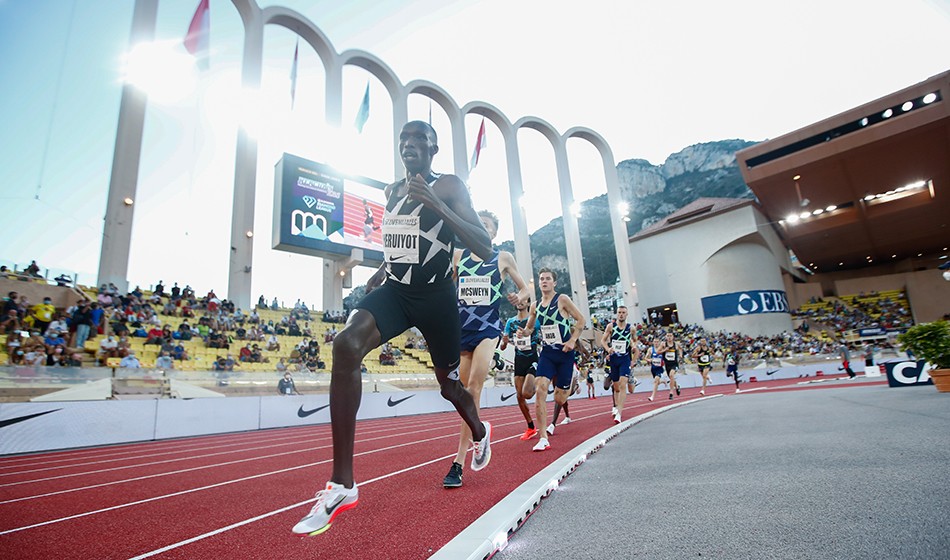 Reigning world champion Timothy Cheruiyot further embarrassed the hapless Kenyan selectors as he won the 1500m at the Herculis meeting in a world-leading time of 3:28.28 which also shaved his PB of 3:28.41.

Cheruiyot took it up and went through 1200m in 2:48.46 with a 57 third circuit. He clearly held something back and then reaccelerated on the last lap which he covered in a stunning 53.71 and a last 300m of 39.82 gave him a half second margin of victory.

An inspired runner-up was Mohamed Katir who broke Fermin Cacho’s Spanish record and was only 0.08 of a second off the European record which is held by Jakob Ingebrigtsen who here returned from his illness to run an encouraging 3:29.25 in third.

Stewart McSweyn set an Oceania record of 3:29.51 in fourth while Tokyo-bound Kenyan Charles Simotwo set a two-second PB of 3:30.30 in fifth and Marcin Lewandowski took a second off his Polish record with 3:30.42 in sixth.

Such was the stunning quality at the event on Friday (July 9), the first nine went inside 3:32 with Ingebrigtsen the only one of the nine not setting a PB as even Jye Edwards in 12th (3:32.23) set a PB.

Afterwards the Kenyan winner suggested he still thought the selectors might reverse their decision. “Today’s race was good and I won it for the third time and I missed competition a lot after spending a lot of time in Kenya where I had a few issues like my hamstring injury and after also losing a relative in my family on the day of the Kenyan trials explaining why I missed out on making the team,” he said.

“Hopefully that will be the deciding performance to make the team for Tokyo. My hope now is to be in another Olympics, that is where my mindset is and I will be very happy if I achieve that.”

Ingebrigtsen said: “I am very happy with the way the race turned out as I have not been able to train at all for the last two weeks due to a bacterial infection and a sore throat so I did not know what to expect. I am confident I will now get even better than this. We will now get back to our training and do more mileage and more workouts in St Moritz to get fast for Tokyo where I will go to win of course.”

The men’s 800m also saw a world lead with Botswanan Nijel Amos, who won the silver medal in London 2012, showing he could go one better in Tokyo in a cracking race.

Elliot Giles held back from the ferocious pace but was unable to close on the leading group and ended up fifth in 1:44.07 but only missed his outdoor PB of 1:44.05 by two hundredths of a second. Giles did beat European indoor champion Patryk Dobek (1:44.28) and US champion Clayton Murphy (1:44.41) though.

Amos said: “I’ve been working really hard in training but I just haven’t been racing. I had an injury when I was supposed to race Doha, but coming back from injury and running 1:42 today shows that things are going in the right direction towards the Olympics.”

World record-holder Karsten Warholm headed the 400m hurdles line-up and he won again in a meeting record 47.08 with Alison Dos Santos chasing him home in 47.51. Rasmus Magi was third in 48.83 with Britain’s Chris McAlister sixth in 49.98. 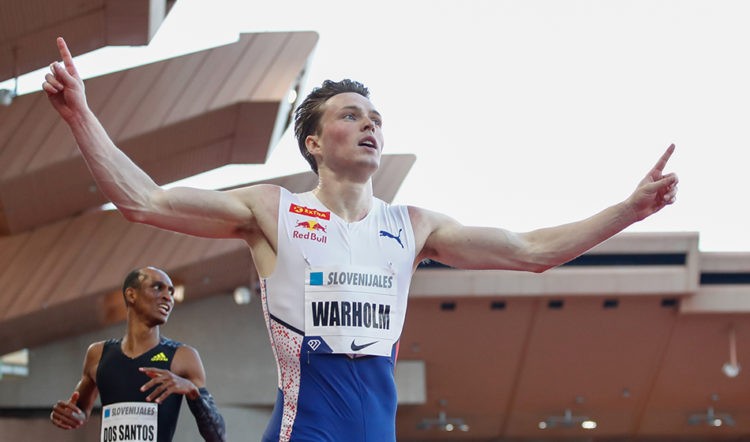 The Norwegian said: “I am very happy about beating my own meeting record of course. For me it is about being consistent. It was also a bit of an untidy race at the end that is something I need to learn to improve.”

The men’s 3000m steeplechase saw a great race and a world lead of Lamecha Girma of 8:07.75 despite the race being marred by incompetent officialdom as the bell was rang a lap too early.

The men’s high jump was won after a jump off by Russian Mikhail Akimenko’s 2.32m (after three earlier fouls at that height) with Canadian Django Lovett’s 2.29m placing him second and European Indoor champion Maksim Nedasekau was a below par third with a 2.25m leap.

In the men’s long jump, Greece’s Miltiadis Tentoglou, the world leader and European champion, jumped 8.21/0.3 in round two and then 8.24/0.2 in the final round to take victory as world champion Tajay Gayle, who jumped 8.29/0.2 in the fifth, fouled his final round as did Swede Thobias Montler, who had jumped a PB 8.27/0.4 in round two so the Greek won with just the third best jump!

He said: “We were close, but the other guys were a little bit better than me today. I won in the last attempt and I don’t feel very satisfied about that to be honest. But it’s okay, it was a fun competition.”

It did not prove a good race for double Olympic sprint medallist Andre De Grasse of Canada (fourth in 10.00) or Wworld 100m leader Trayvon Bromell (fifth in 10.01.).