Stars of the future shine at Mini London Marathon 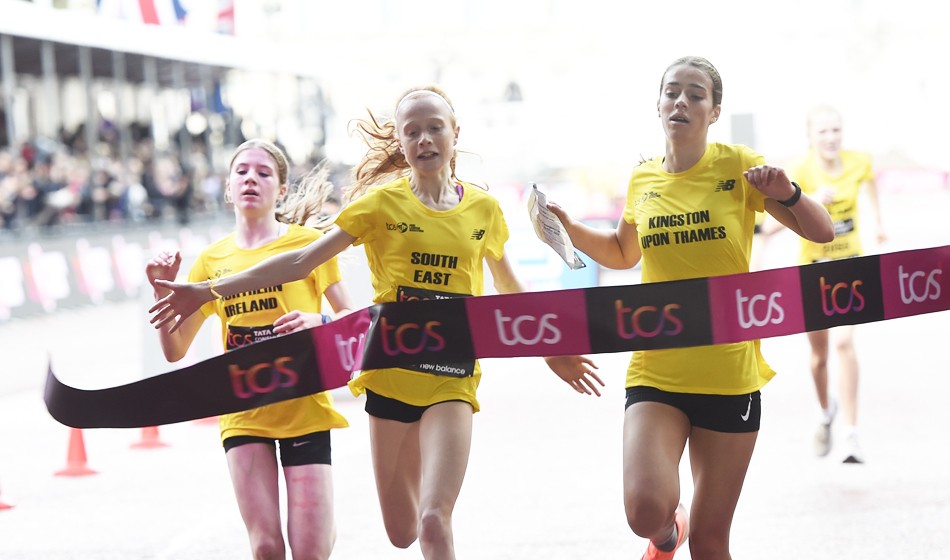 The class of 2022 at the TCS Mini London Marathon graduated in style on Saturday (Oct 1). Racing 24 hours before the main marathon gets underway, around 7000 youngsters relished the occasion as they charged down The Mall cheered on by friends, family and world marathon record-holder Eliud Kipchoge.

If past results are anything to go by then there is a strong chance that many of these athletes will go on to become Olympians and major championship medallists as seniors. The history of the Mini Marathon reads like a who’s who of British distance running with everyone from Mo Farah and David Weir to Jake Wightman, Laura Muir, Eilish McColgan and Keely Hodgkinson having taken part, to name just a few.

Innes Fitzgerald and Henry Dover took the under-17 titles on Saturday and they are two of the most exciting young endurance athletes that Britain has ever produced.

Fitzgerald set a UK under-17 women’s 3000m record of 8:59.67 in Belfast in July and she took her first Mini Marathon title here despite having recently enjoyed a three-week end-of-track-season break.

“I felt good the whole way and it felt shorter than I expected which was a plus,” the Exeter Harrier said. “I wasn’t sure how this was going to go as I’ve just come back from a rest. I had three weeks off but I was doing some easy running. It was a nice break, physically and mentally.” 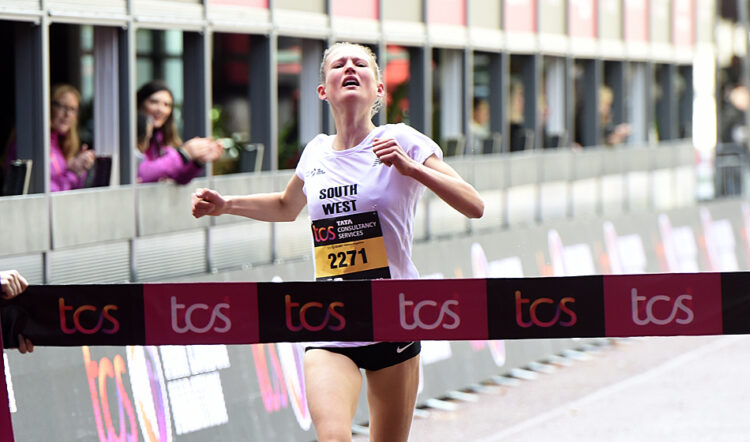 Fitzgerald has only burst on the scene this year under the guidance of coach Gavin Pavey after previously running for fun.

“Beforehand I was just running by myself,” she says. “It was a hobby, really. But it’s just taken off when I met Gavin.”

Gavin is husband and coach to former European champion Jo Pavey and Fitzgerald says: “They’re very knowledgeable in everything. If I ask them a question they’ll tell me more than enough.”

She has now started A-levels in maths, physics and biology but hopes to make the under-20 team for the European Cross Country Championships in Turin in December.

“I felt good the whole way and it felt shorter than what I was expecting!”

Innes Fitzgerald – who broke the UK U17 3000m record this past summer and is coached by Gavin, husband of @jopavey – on her victory at the Mini @LondonMarathon 🔥🥇

Dover similarly has ambitions of making the Euro Cross junior team despite only turning 17 this week. On his Mini Marathon victory, he was delighted as he’s finished runner-up twice in the past.

“It was brilliant with a really fast start as usual, the crowds and all the sights on the route,” he says.

How did he have time to admire the views? “Big Ben is hard to miss,” he explained. “It’s a brilliant area and a lovely finish going past Buckingham Palace. It’s one of my favourite races.” 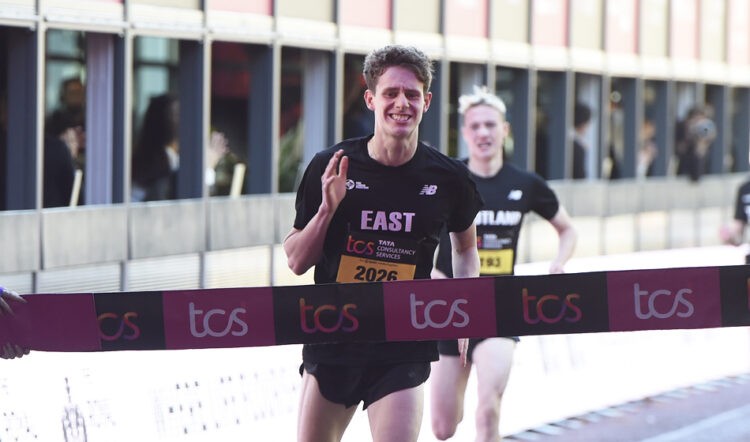 Like Fitzgerald, Dover has swept all before him this summer and won the English Schools and SIAB Schools International 1500m titles and England Athletics 3000m crown.

“It’s one of my favourite races of the year.”

Henry Dover, who won English Schools and SIAB International gold this year, on his victory in the U17 race at the Mini @LondonMarathon 🔥🥇

On his upcoming goals, the Shaftesbury Barnet athlete said: “Track is definitely my main event but I still have aspirations to win some of the cross-country races. I’ve got high hopes and am going to try to match them.”

Isla McGowan was hoping to finish top 20 at best but won the under-15 girls although it was a close run race as the Banbury athlete held off Katie Pye and Emer McKee with Shaikira King a close fourth.

“It was a total surprise to win,” said McGowan. “It’s my first time at this event so I thought I might come top 20 at best.” 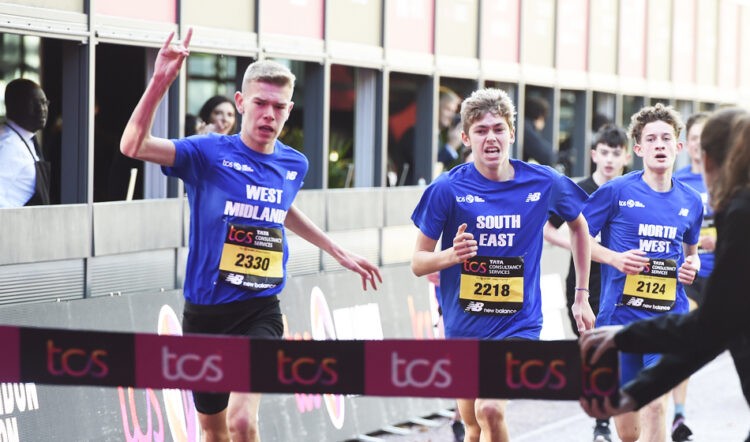 Owen Ulfig enjoyed victory in the under-15 boys race in a similarly competitive race when the former triathlete from the West Midlands pipped Jon Peppin and Evan Grime.

Thomas Thake finished sixth in the Mini London Marathon last year after going off too quickly and blowing up. This time he paced his race better and won the under-13 boys race.

Thake runs for Hallamshire Harriers in Sheffield – a club that counts Seb Coe among its former members. Naturally, Thake would love to follow in his footsteps and says: “The 1500m is my distance so I’m hoping to do well in that.” 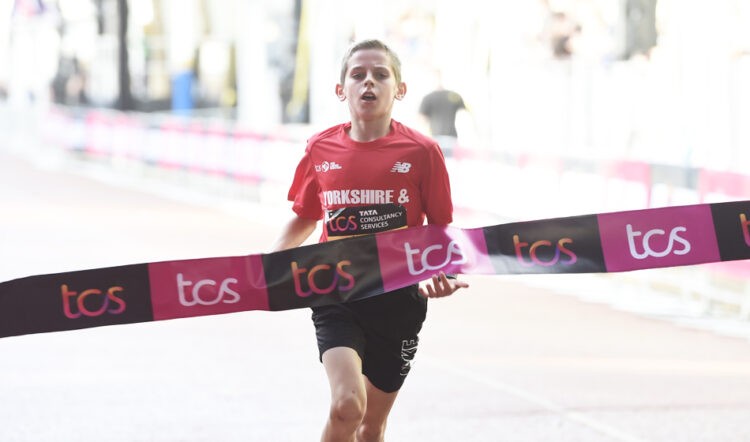 In the under-13 race Katherine Haslip proved one of the most dominant winners of the day as she took victory by 18 seconds from Kitty Scott. Haslip won the UK Inter-Counties title in March and will be looking for more cross-country success this winter.

Like many athletes she had some family support in London but her mum only just made it to the event in time after having to navigate the train strikes that made travel into London difficult. 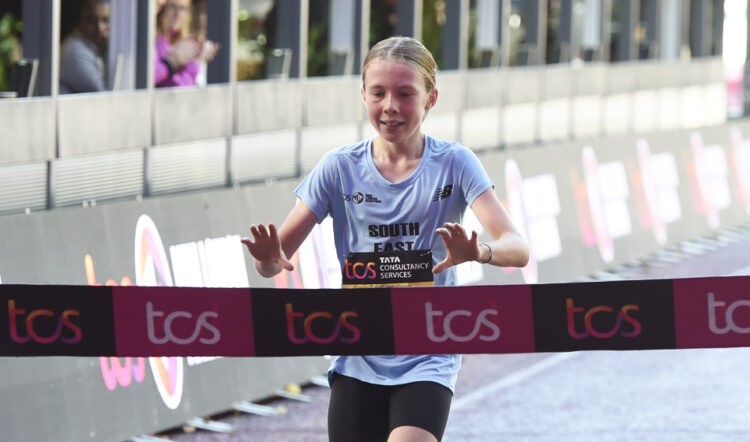 Yasmine Hodkinson and Illias Zghoundi won the under-17 wheelchair race titles in style too. Both are members of the Weir Archer Academy and will be hoping to enjoy the same success that David Weir, a multiple Mini Marathon winner who went on to claim multiple London Marathon and Paralympic titles.

“It was just insane. The atmosphere was great.”

The youngsters competing are not the only ones with ambition either. After moving the Mini Marathon from Sunday to Saturday, the organisers intend to grow the participation figures so they reach 50,000 in time for the London Marathon’s 50th anniversary in eight years’ time.

It is a big challenge but helped by the fact sponsor Tata Consultancy Services are giving £10 to each runner for their school to spend on PE or IT equipment. 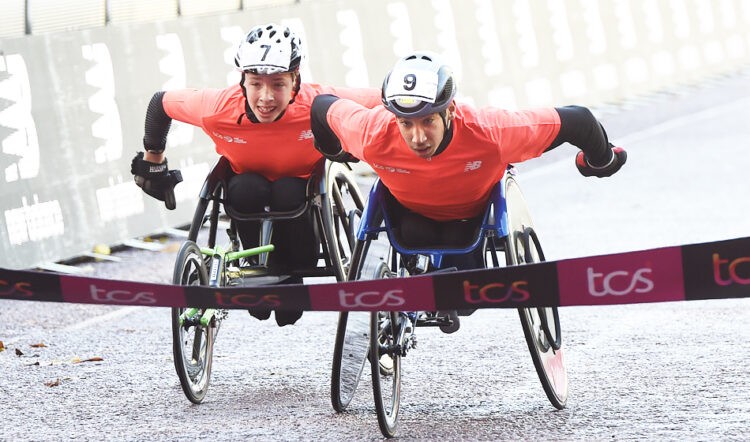 You can find results from the TCS Mini London Marathon here